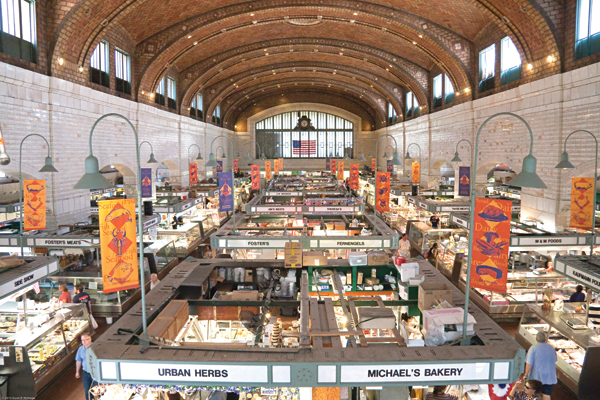 Photograph courtesy the City of Cleveland

It wouldn’t be summer without a trip to the market. While local meats and cheeses are available all year round, there’s something special about the fresh produce for sale in late summer. For most people, a trip to Cincinnati’s own Findlay Market provides everything they need. But for those adventurous enough to travel outside of I-275, the Midwest offers a variety of historic markets just waiting for you to explore—and there is no better time to check them out than August, when nearly everything is ripe for the picking.

West Side Market, Cleveland
Upon first entering Cleveland’s 100-year-old West Side Market, you can be forgiven for thinking you’ve walked into a train station. The high, vaulted ceiling is decorated with Guastavino tile, the same tile used on New York’s Grand Central Station. The 137-foot bell tower only adds to the sense that you are entering some majestic depot. Despite what your brain may tell you, West Side Market has always been used as a public market. Named the “best food lover’s market in America” by Food Network in September 2010, the market is celebrating its centennial this summer. The party started in June, and will culminate with a Centennial Gala dinner in November. For lunch, check out Steve’s Gyros, which appeared on Man vs. Food. Better get there early—the lines can get so long, the staff will shoo you away 30 minutes ahead of posted closing times. If you need a snack, enjoy Czuchraj’s cured meats. The beef jerky got a mention on Food Network’s Best Thing I Ever Ate. Or try dichotomy corn from Campbell’s Popcorn Shop. It’s coated in both caramel and cheddar cheese. Note: Don’t forget your Lipitor. westsidemarket.org

North Market, Columbus
The last remaining market in what used to be a series of public markets throughout town, Columbus’s North Market sits in a 19th-century warehouse a short walk from downtown. Stand after stand of local produce, ethnic food, and delicious desserts make the market a worthwhile stop on a trip to Ohio’s capital. For some good meats and a history lesson, stop first at Heil’s Family Deli. The Deli has been a market mainstay for more than 50 years. For dessert, Jeni’s Splendid Ice Creams is a must. Jeni’s prides itself on only using Ohio produce and milk from local grass-fed cows. While you won’t find traditional favorites like chocolate chip, you can try more exotic flavors, including goat cheese and cherry or wildberry lavender. The Columbus company has started to receive national attention, and earlier this year Jeni’s won the James Beard Award for best dessert cookbook. Make sure to visit on a Saturday to experience the farmers’ market. See tomatoes, corn, and even grapes from around the state. August 11 brings the annual Farmers’ Festival, with an endless supply of produce, contests rewarding the best local products, and cooking demonstrations celebrating Ohio’s bountiful harvest. northmarket.com

Indianapolis City Market
Like nearly every building in the Hoosier State, the Indianapolis City Market feels like a basketball arena. The red-brick facade opens into an airy interior, with high windows and a peaked ceiling. To get a glimpse into the building’s past, sign up for the basement catacombs tour, offered every Wednesday and fourth Saturday of the month during the summer. Lunch requires a stop at Jumbo’s, which has been selling bigger-than-your-head deli sandwiches for reasonable prices for more than 30 years.

If you’re after something more unique, check out Fermenti Artisan, where in addition to local meats and cheeses, you can also buy hand-made sauerkrauts, kefir sodas, kombucha drinks, and more. During the hot summer months, cool down at Tomlinson Tap, an all-Indiana beer bar on the mezzanine level. A summer visit also allows you to browse the outdoor farmers’ market, with produce from around the state. Specialties include Indiana sweet corn and squash. On the fourth Saturday of the month, the farmers’ market is accompanied by a city-wide flea market. indycm.com

Pittsburgh Public Market
While it’s only been open since 2010, the Pittsburgh Public  Market has already carved a niche for itself in the Strip District, a neighborhood full of small markets. Housed in a produce warehouse stretching five full blocks, the market is only open on weekends, so you’ll have to schedule your visit accordingly. The merchants pride themselves on local, organic products. Crested Duck Charcuterie offers cured meats you can’t find anywhere else, including rabbit sausage. It only makes sense to wash down your selections with a growler of Big Hop IPA from East End Brewing Company, a local microbrewery.

During the summer almost a dozen farmers join the market’s 22 full-time merchants, offering a variety of Pennsylvania produce. The farmers’ market is complemented by outdoor events every weekend. You’ll find all kinds of events, including cooking lessons, gardening tips, and music. pittsburghpublicmarket.org

Originally published in the August 2012 issue