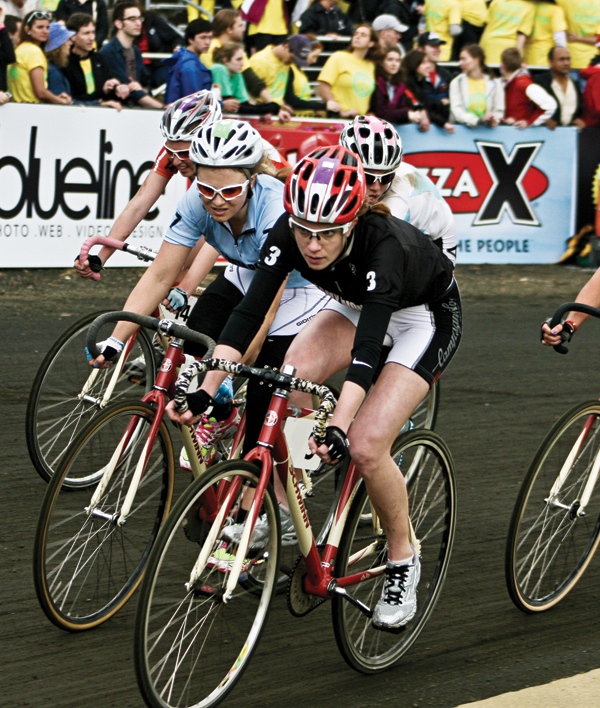 The 1979 award-winning flick Breaking Away took Bloomington’s love for bicycles to the big screen, and it wasn’t all Hollywood hype. This picturesque college town—dubbed B-town by locals—has long been a cycling mecca, and that’s not all. An eclectic community nestled in the rolling hills of southern Indiana, it boasts topnotch bars, eateries and culture, too. If you need a reason to visit, come for the legendary Little 500 bike race at Indiana University’s Bill Armstrong Stadium (April 20 & 21), or hit the town anytime for a weekend getaway, driving roughly 130 miles of scenic country roads (I-74 to Indiana Route 46) to get there. Required listening for the two-and-a-half hour ride: feel-good jams from native Hoosier John Mellencamp, who has a home just outside town, and the indie rock stylings of Murder by Death, formed in Bloomington.

The Little 500
Founded in 1951 by Howdy Wilcox Jr., then-director of the Indiana University Student Foundation (IUSF), the Little 500 is the largest collegiate bike race in the country. Thirty-three four-person teams of amateur student riders compete, pedaling their hearts out relay-style for 200 laps (men) or 100 laps (women) on a quarter-mile cinder track.

The catch: Teams share identical single-speed bikes, handing off the bike as a runner would the baton. This official rule levels the playing field and raises the stakes. One fall, bad exchange, or distraction can undo months of training for the big win. Cheer on five-year reigning champs the Cutters—named after the fictional townie team in Breaking Away—root for an up-and-coming team, or applaud the collective spirit and determination of the entire pack. And feel good about it, too; proceeds from the event fund scholarships for working students.

Wander north on Kirkwood Avenue and you hit campus, its entrance marked by the architectural prowess of the gothic Sample Gates. Through them rests the Old Crescent, the oldest part of campus, where the brick and limestone buildings are guaranteed to make you nostalgic for your own college days on the quad, whatever your alma mater.

Fuel for the Road
Before you take off on the way home, brunch at the quirky Runcible Spoon Café (runciblespoonrestaurant.com), beloved by locals for its whimsical vibe, all-day breakfast and fresh coffee, roasted on site since 1976. When in doubt, order the corned beef hash and an Irish mimosa, an oddball but delish mix of orange juice, champagne, and Guinness. Uptown Café (the-uptown.com), another neighborhood hotspot, does mornings with Creole soul—think Andouille omelets and cornmeal pancakes—while FARMbloomington (farm-bloomington.com)brings seasonal bounty to the table. For an afternoon bite, stop by The Laughing Planet Café (thelaughingplanetcafe.com), a colorful eatery dishing up California-style burritos and house-made veggie burgers packed with local produce, or grab a gourmet slice and old-fashioned cola from nationally acclaimed Mother Bear’s Pizza (motherbearspizza.com).

Originally published in the April 2012 issue