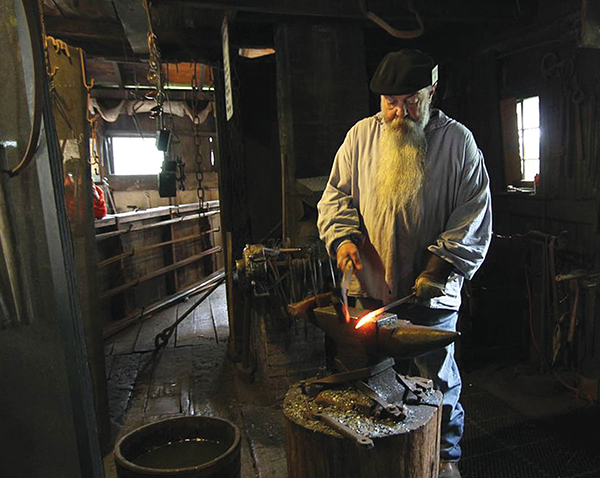 Madison, Indiana
A stroll down Main Street in Indiana’s largest historic district makes for great sightseeing, but be sure to stop along the way in shops like Village Lights Bookstore, Main Street Antique Mall, and Madison Table Works (makers of handcrafted custom tables of all types). Madison is home to several Antebellum-era structures, including the Lanier Mansion, a National Historic Landmark built in the 1840s to be the grandest residence in Madison. It’s still called “the crown jewel” of the historic district. Guided tours of the Greek Revival–style mansion—with an interior fully restored to replicate the original, a view overlooking the Ohio River, and an extensive garden—are offered year-round.

The town is part of Indiana Freedom Trails, a group that works to identify and preserve Underground Railroad sites. Follow a 66-mile Madison-to-Versailles loop, stopping at former safe houses along the way, or take one of several walking tours through Madison’s downtown. The trail leading to the lesser-known Georgetown district, one of the early free black communities in Indiana, offers some of the best sightseeing. You’ll also pass the much-acclaimed Bistro One, a local favorite run by longtime owner/chef Nick Izamis. Stop in for the hummus platter or lemon shrimp.

Roscoe Village, Ohio
Along the banks of the former Ohio-Erie Canal in Coshocton, Ohio, sits Roscoe Village, an 1830s canal town turned living-history village, replete with costumed guides in 19th century garb.  For a hands-on historical experience, take the self-guided Mudlarked in Roscoe tour (offered Memorial Day weekend through mid-September), and help “villagers” with an array of old-fashioned activities—from candle-dipping to tin-punching to rope-making—along the way. Just over a mile from Main Street you’ll find Coshocton Lake Park, where visitors can take a 45-minute tour of a restored section of the canal in the Monticello III, a horse-drawn canal boat replica. Prefer a more active tour of the old lakefront? Register for the park’s Indian Mud Run (June 21), a Warrior Dash–style 5K obstacle course through Coshocton.

To experience present-day Roscoe, visit Medbery Marketplace—four stories of grocery, deli, antique, and specialty items, and a B&B. Or scope out summer festivities such as the Coshocton Hot Air Balloon Festival (June 6 & 7). Nearby Pearl Valley Cheese, an award-winning 80-year-old cheesemaker that churns out 20,000 pounds of Colby and Swiss daily, will delight the lactose tolerant. Need a place to put all that cheese? Just 20 minutes outside Roscoe is the Longaberger Homestead, headquarters of the legendary basket-making company.

ShakeRag, Kentucky
Most folks know Bowling Green as the hometown of GM’s Corvette and cake mix maker Duncan Hines, but there’s more to the city’s history than cars and cakes. Tucked at the end of Bowling Green’s historic State Street (it dates to at least the early 1800s) you’ll find the ShakeRag district, one of the first free black communities in Kentucky to support a burgeoning professional and middle class, and the city’s only African-American district that has maintained its historic integrity.

The district—so named, according to legend, for the “rag shaking” that occurred every Monday, the neighborhood’s designated wash day—was added to the National Register of Historic Places in 2000. Many of the original businesses and homes, both elaborate and bungalow-style, are still accessible by walking tour. The opening of the new African American Museum, slated for June, will offer visitors an even more in-depth look at the city’s heritage, with a collection of photos, artifacts, and other vestiges of the district’s past—and they’re kicking it off with their second annual Juneteenth celebration next month.