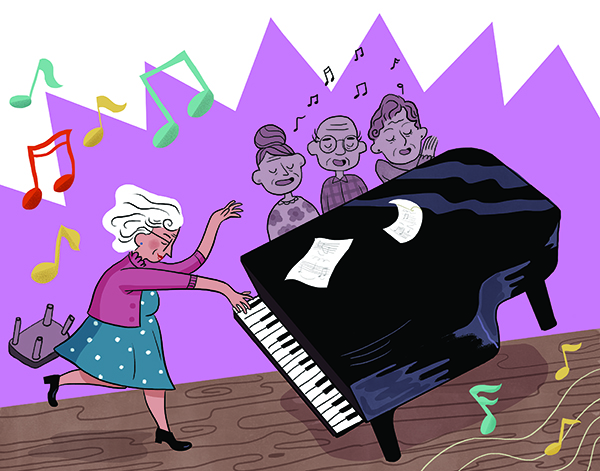 Mary Lou Boylan plays the piano with such ease and energy and enthusiasm that it’s hard, at first, to recognize what a phenomenon she is. Not only does she appear to know every popular song ever written, she can play them in any key, the better to accommodate the amateur voices that frequently cluster around her. Like any strong pianist, she has her own inimitable style, and the sound of it—as upbeat as it is unpretentious—combines with the remarkably physical nature of her playing to rouse audiences to participate.

One second she’s sitting down, then she’s standing up, her foot on the pedal, pounding the keys and peering out at her listeners, playing with one hand and miming a conductor with the other, all the time singing along—all to motivate. “Tap those toes,” she implores a group of seniors. “It’s good for your circulation!” Or: “This is a polka. You know what you gotta do. One, two, three—kick.” Stepping to the side, she demonstrates a strong kick of her own then snaps back to the keyboard without missing a beat.

She is a virtuoso in a red jacket, white collared sweater, and gray slacks, the picture, in a way, of the 87-year-old Hyde Park mother and grandmother that she is. Except that description sells her short. She is an under-the-radar Cincinnati institution.

I first encountered Boylan at a sing-along several years ago. Struck then by her sheer ability to keep her fingers flying from one request to the next, I quickly learned that the lady is something of a legend on the east side of town. She has a long history of music directing for variety shows at Christ the King and St. Mary’s Churches, and at the Hyde Park Country Club. She has done fund-raisers at Ursuline Academy and musical shows with the Irish American Theater Company. If an institution can afford to pay her, she will accept remuneration, but if it cannot (and most cannot), she’s not in it for the money. “My tax accountant just laughs,” she told me. “‘How much did you make this year?’ he’ll say. And maybe it’s $3,000.” The point for Boylan—or perhaps, the mission—is to stay as busy as possible and to spread her spirit as widely as she can.

She does a number of pro bono songfests in homes for the elderly on weekday mornings. For 18 years, she has conducted nearly two dozen volunteer singers, the Queen City Songbirds, rehearsing and performing with them once a month at evening recitals. They have appeared at most of the tri-state’s retirement communities, nursing homes, and Alzheimer’s facilities. A smaller group, the Oakley Voices, rehearses at the Oakley Senior Citizens Center and performs monthly.

“I do it because I love doing it,” Boylan told me recently. “There’s something about music that’s good. I’ll be in an Alzheimer’s unit, and I’ll play ‘Name That Tune,’ and a lot of ’em will get the songs. There’s something about music that connects.” Then in the next breath, “When you get right down to it, I’m a ham. When I’m with the Songbirds, we laugh a lot and we have a good time. I have 22 volunteers. If they don’t want to have a good time, I don’t want ’em.”

Boylan doesn’t say it—she may not even recognize it—but there’s something else going on here. People with the kind of passion, talent, and charisma that she radiates are essential to creating what we like to call “community.” They are some of its most crucial binding elements. Boylan doesn’t just connect in the Alzheimer’s units. She connects all over—and she has all her life.

Born in Hyde Park, she says she “had a knack” for music inherited from her mother and her grandmother, both of whom played, and her father, who loved to sing. She took lessons through grade school, and in college studied classical music. “Classical is the best basis for everything,” she says. “It gives you skill and dexterity.  I played Chopin, Beethoven, and Brahms. This was at Mount St. Joseph. I started as a math major because I love numbers, but I missed music so I switched.” She studied harmony, sight-reading, musical dictation, orchestration, and conducting. In 1949 she graduated with a B.A. in music.

Soon married, and raising her family in Hyde Park, she became a teacher to grades three through seven at Guardian Angels School—“I taught everything”—while giving piano lessons on the side. The memory isn’t pretty: “It drove me crazy. I wanted to take those kids and put their fingers where they belonged!” She later volunteered to teach singing to grades five through eight at St. Mary’s School, presumably a more satisfying endeavor if only because of personal preferences: “In my mind, the highest form of music is a choral group. I love instruments, but what is better than the human voice?”

Attrition, she says, eventually spelled the end of her teaching, but not of her affiliation with schools, where Christ the King’s annual Hits and Mrs. Variety Show needed a music director. “I love the joy of a show,” she says. “I love working with people.” She directed the show for 20 years, playing the piano, teaching the music, handling the arrangements, directing the chorus—which she describes as “sing, dance, carry on—you know.” Sheila Benner, emcee for the Songbirds, has had a unique view of her friend’s effect over the years.  “Tens of thousands of lives have been brightened by the upbeat repertoire of music and choreography created and arranged by Mary Lou,” she says. “If Cincinnati would adopt its once-proposed slogan, ‘The City That Sings,’ then surely Mary Lou Boylan is its Pied Piper.”

On a cold Friday morning in March, Boylan is in the activity room of the Hyde Park Health Center, surrounded by nearly 50 elderly listeners. None of them look robust. Most wear the glazed expression of someone not totally present. On the blue walls are large cutouts of snowflakes, each one framing a picture of a resident. They bring to mind a kindergarten bulletin board.

“Any Marys in the house?” Boylan asks. “We’re going to sing to you.”

A George M. Cohan sampling is imminent, with the song “Mary’s a Grand Old Name” up first. “You can do a little soft shoe while you sit there,” Boylan says. She breaks into “I’m a Yankee Doodle Dandy.” This is when she tells them to tap their toes, and as the progression moves on to “You’re a Grand Old Flag,” one octogenarian stands up and salutes. Another lady taps her feet. “You kept it going. That was good!” Boylan says. “Music should make you happy.”

The banter is non-stop. “I like to talk,” she told me. “My husband said, ‘You’ll be dead three hours before you stop talking.’ I should have smacked him, but I was laughing too hard.”

With St. Patrick’s Day just around the corner, she rolls into an Irish roundup, advising, “You gotta jig while you’re sittin’ there.”  Anything to spark participation. She stands up, she bounces up and down, she sings—but she keeps playing. There are trills and arpeggios and fortissimo (but not much pianissimo) as the music cascades through the room.

“I make it up as I go,” she tells me later. “I’m never sure what’s going to come out. Most music is written too high, and most of the time I’ll have to transpose it down. Transposing is becoming a lost art. It’s a mental discipline; it makes you use your brain. But I think about it all the time. If I’m walking, I’ll be thinking of arrangements. If there’s a commercial on, I’ll get up and play the piano. And then I write some music, too. I write some of the songs the Songbirds sing.”

Today, at the Hyde Park Health Center, she focuses on nostalgia. A World War II set (“Don’t Sit Under the Apple Tree (with Anyone Else but Me)”) gives way to Broadway (“Hello, Dolly!”) and then to early 20th century (“Daisy Bell (Bicycle Built for Two)”). When it’s over, Boylan walks around and says good-bye to each person in the room. “Glad to see you,” she concludes, and the glazed expressions dissolve into gratitude.

Six weeks later, I catch up with Boylan again, this time at the New England Club nursing home in Anderson Township. There with the Songbirds, she tells me that a scheduling glitch has left her unannounced; the audience is small. No matter. “Sing along,” Boylan says. “Join us whenever you feel like it.” With that, the ladies launch into “Sing (Sing a Song),” then “Say It with Music” and “It’s a Grand Night for Singing.” There can be no mistake what the next hour will be about.

“You get into something they don’t really know,” she says of her audiences, “and you kind of lose ’em. So you give ’em what they want.” These precepts are instinctive with Boylan. In small groups around a piano, her entire thrust is to get people to sing. She teases with familiar introductions, she calls out suggestions, she piggybacks onto the slightest show of interest from the assembled. “People don’t sing around pianos as much as they used to,” she says. “But if you get the ones who love it, it doesn’t take much to get them started.”

For the past 12 years, following 48 years of marriage, Boylan has been widowed. Her two children live close by (neither of them plays the piano), but her time to see even them is limited by the endless succession of engagements, whether those she seeks or the many that seek her. Only in July, when she goes to Michigan, is she schedule-free. Already older than many of those who gather in the venues she graces, she stands out among them as a paradigm of how loneliness and purposelessness need not accompany advancing age. She is on a tear, but it’s a beautiful tear, elevating the lives of countless others through her good fortune. “I received a gift,” she says. It’s a gift she’s paying forward.