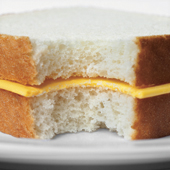 You’re holding in your hand my least favorite issue of this magazine: the annual review of the best restaurants in town. When this issue arrives in our mailbox, my wife, Angie, tears into it as if there were a $100 bill hidden inside. She oohs and ahhs at the beautiful photography, dramatically licks her lips, and even kisses a page here and there. These theatrics are for my benefit. That’s because Angie’s a big-time foodie. I am not even a small-time foodie. Angie enjoys cooking gourmet meals and trying new restaurants, while I regard food pretty much the way I regard oxygen: I know I need it to survive but I have no interest in talking about it. This month, however, I’m making an exception because I feel morally obligated to stand up for my kind: the non-foodies. We’re mad as hell and not very hungry and we’re not going to take it sitting down anymore!

I see that look on your face—don’t try to hide it. Foodies are dumbfounded by non-foodies. So much so that foodies will sometimes react with shock and horror if you inform them that a steak from Ponderosa isn’t that bad, or that much different from a similar cut at Morton’s. They take it personally! As if you just verbally assaulted their beloved grandmother or something!

At first they think you’re joking. Then they think you somehow mistook Ponderosa for Jeff Ruby’s. When they realize that you were neither joking nor mistaken, they will try to convert you. They’ll ask: Have you ever had steak prepared in such-and-such a way? Or served alongside this-or-that? Have you ever eaten a steak here or there? When you answer in the affirmative but continue to claim that food worship is way overrated, they wonder if you have some sort of medical condition. Could it be that your taste buds don’t work, giving everything the flavor of tofu? When I explain that my taste buds and olfactory nerves work just fine, thank you, the foodies get really agitated and assume that the problem must be mental. My in-laws have come to this conclusion.

Whenever my wife’s family gathers, food is the honored guest. Weeks before the actual event, e-mails begin to bounce back and forth as each person shares a lengthy list of dishes she is thinking about preparing so that the others can weigh in and help her make the decision. This triggers other suggestions and dozens of links to various recipe sites. Then the delicate negotiations begin as each person tries to steer the others in a specific culinary direction. One may write: Julie, instead of whipping up that beef tenderloin with gorgonzola, how about making that Cajun beef brisket? We all remember that from Easter ’94 and would LOVE to savor it again! If my in-laws put as much time into, say, studying foreign languages as they put into their menu planning, they would each be fluent in six different tongues.

I mostly stay out of these e-mail exchanges, but I can’t resist the urge to speak up now and then. I like to suggest fancy-sounding pizzas, and in lieu of a recipe place the phone number to the neighborhood Domino’s. When the group seems to be gravitating toward a chicken dish for the entrée, I hop on the meal wagon and suggest KFC, reminding everyone that we can eat off of paper plates and won’t have to bother with washing the dishes. Mostly, my in-laws ignore me; occasionally, they tell me—despite all the previous failed attempts—that whatever dish they’re going to prepare will so delight and amaze me, that (finally!) I will become a foodie, and a die-hard one at that. Within minutes of this culinary conversion, they suggest, I will start raving about glazed ginger-soy chicken or East Indian roasted rack of lamb. Not likely.

When feeling really pressured, I jokingly tell them that I have embraced a new faith that strictly forbids the eating of anything prepared by one’s kin. As irritating as they find this, it’s not until we actually gather for the event that their real displeasure emerges. That’s because I rarely eat their food. It’s not that I have anything against them or the dishes; usually, I’m just not in the mood.

When the in-laws ask what I am in the mood for, they don’t like my answers. Snacks are my primary food source, which means my diet mostly consists of soft pretzels, chips, and candy. (I’m a big fan of Sno-Caps.) When I do sit down to the table for a real meal, my favorite dishes are pancakes, ham and Swiss sandwiches, and pizza. For dessert, I mostly eat ice cream, though cookies will also do the trick.

This rubs foodies the wrong way because they want everyone to love their dishes and rave about them. Oh, Natalie, I don’t know what you could have possibly done with these deviled eggs, but they are out of this world! Out of this world!

I don’t have such enthusiastic responses. In fact, I’m well known for having no response. The family foodies take my silence personally, as if it’s an indictment of their cooking and their character. They feel compelled to probe, to pull a comment out of me in much the same way that, say, someone who got their hair cut may ask a spouse who didn’t notice what they think.

“Steve, did you try my Belgian egg rolls?” one of my sisters-in-law will ask.

“No, but they sure look great.”

“Go ahead and try one; you’ll love ’em. There’s a hint of cinnamon in them.”

“No, thanks. But, again, they sure look great.”

“You’re not even going to try one?”

“All you ate was turkey and potatoes.”

“That’s all I wanted. I had three helpings.”

“That’s OK. Would you like dessert? I’m headed to the fridge for a Klondike bar.”

“But what about your wife’s New York-style cheesecake?”

“No, I don’t think so. Ice cream sounds better to me.”

When it comes to my disinterest in food and my unconventional eating habits, it’s not just family that I need to manage, it’s my colleagues and clients, too. My work in advertising frequently takes me to New York. After a day of meetings or shooting a television commercial, everyone else is eager to relax over a fine meal in one of the town’s countless stellar eateries. I couldn’t care less. While they debate where to eat, I zone out. I can follow the conversation, really, but they might as well be speaking in Finnish.

Second foodie: “Sounds yummy, but I heard Freddie Newsome’s Café has a new chef and he’s taken the place all fusion—Hawaiian and Eastern European.”

Third foodie: “We can’t be in New York and not eat at that new Russian place.”

Once, a conversation went on so long I stepped out of the hotel and bought a soft pretzel and Coke from a street vendor and returned, only to find my colleagues still debating. Making matters worse, they had invited the concierge into the discussion, which only resulted in another 25 options being placed on the table for consideration. I told them to get me when they made up their minds; I’d be at the bar.

From my point of view, dining out with work friends becomes even more frustrating when the handing out of the menus at the restaurant initiates another 30-minute round-robin about what looks good, who recommends what, and which items on the menu remind anyone of anything else they have ever eaten in their lives. I do my best to redirect the conversation, usually to little avail. I’d rather talk about the wallpaper. Which makes sense, since I’m usually hungry enough to eat it.

Early in my career, I felt pressured to participate in the “Where shall we dine tonight?” debates and felt compelled to order one of the fancier dishes on the menu. I worried if I played it safe with, say, a straight-up filet or a club sandwich, that I would be perceived at best as not adventurous, and at worst, uncivilized. I mean, after all, isn’t the ability to prepare and enjoy duck breasts with peaches and tarragon what separates humans from apes?

I also used to pretend that I liked golf and that I enjoyed sports. But I finally matured to the point where I could accept myself for who I am: a happy vulgarian. Besides, my colleagues and clients look to me (hopefully) for my advertising talent, not for the caliber of my palate. So now I just order what I want. Sometimes that’s something fancy enough to be the cover shot on a gourmet magazine. But most of the time I choose to go heavy on the cocktails and stick to bread and pasta, or bread and steak, or bread and more bread—never a bad choice, if you ask me.

A few years back, I so enjoyed the pumpkin soup at a five-star restaurant (whose name I can’t remember) that when it came time to order dessert—and, I must say, they had an impressive selection—I ordered another bowl of the pumpkin soup. The waiter assumed I was kidding. He chuckled and asked again what I wanted for dessert. I told him I wasn’t joking. My colleagues, by that point used to my oddball eating habits, nodded and shrugged as if to say, He’s not kidding—and don’t ask us to explain.

When the waiter came back with our desserts, he ceremoniously placed my soup in front of me, smirking, while several other waiters and one of the chefs looked on. I have no idea how many rules of fine dining etiquette I violated, but you would have thought I was eating through my ears. One of the waiters even snapped a picture with his cell phone. I ignored them all and ate my soup—which I enjoyed as much as any cheesecake or crème brûlée I have ever had.

So, all you foodies out there: Give us non-foodies a break! We don’t begrudge you your tomatillo gazpacho or your chicken Florentine artichoke bake topped with a homemade glaze made with Nepalese cucumbers. So please don’t begrudge me my simple cheese sandwich.

And finally, a note to my in-laws: Next time we get together, I’ll be fasting—for religious purposes, of course.

Feeling odd or left out? Contact the author via his Web site: stevekissing.com