If you regularly cross the Daniel Carter Beard Bridge, permit me to assume a few things about you. Of course, you call it the Big Mac Bridge, as it resembles the inviting golden arches where drivers grab a morning McMuffin that they—you?—eat with one hand. And as you curl around your ramp on the Cincinnati side, I’ll bet you’ve noticed the work progressing on the retaining wall that stretches along the western base of Mt. Adams. It’s hard to miss. It was—is?—the world’s most expensive retaining wall. Nobody has ever been proud enough of that to give it a cute nickname.

The wall is currently getting a faux stone-masonry facing, allowing it to display a little style instead of simply looking like a giant box of gray Crayolas. It’s also receiving some tweaks to its interior network of cables, plus a few repairs. Everything should finish up by this summer. Finally, the Great Wall of Mt. Adams will look like a completed project. Finally. As far back as 1969, we were so excited about getting a new highway and bridge between Newport and Cincinnati that the Department of Transportation put an exit sign on I-71 that read: 471 South – Newport – right lane. Didn’t matter that there was no exit, no bridge, and no I-471. Not even any finished blueprints. Just the sign. That’s how excited we were!

It wasn’t until 1973 that several tons of earth beneath Kilgour Street in Mt. Adams were dragged away to make room for the ramps that would extend from the future bridge. Engineers had tested soil samples of the hillside’s base and given the thumbs up. The job would be done, roughly, by about 1977. Richard Nixon had just begun his second term; he too expecting smooth sailing throughout this same timeline. Both he and Mt. Adams failed to grasp their approaching collapse.

Nixon actually got off easy by comparison. His ordeal lasted 18 months instead of 12 years. His four-member family was evicted, versus about 60 Cincinnati families who got the boot, with no warning. The White House, and several other nearby homes, never risked being demolished, nor did the whole surrounding neighborhood face disintegration and extinction, but that’s exactly what happened to Mt. Adams. Cincinnati found itself uncomfortably close to becoming the City of Six Hills.

Things started going south—literally—soon after the toe of Mt. Adams’s western slope was removed in 1973. On Baum Street just above Kilgour, cracks began growing inside people’s houses and down their front steps. Ruptured gas and water lines prompted a swift shutoff of utilities. All highway work was halted. Building inspectors arrived, checked things out, and abruptly told 15 families to get the hell out; you no longer live here. Have a nice day.

New experts came in to explain what the landslide’s previous experts had not foreseen. A thorough investigation pointed to three prime suspects: the Ohio Department of Transportation’s engineers, the contractors doing the actual construction work, and God. To be fair, God’s mysterious ways can most certainly include a landslide that occurs just as heavy construction begins on a massive structural hillside. These things happen. Besides, there was no time to waste pointing fingers—we had to decide what to do next! That bridge wouldn’t be worth much without exit ramps on both ends!

Two plans were proposed in 1974, each estimated to cost about $6.3 million. One was very simple: purchase, and then raze, every single edifice on Baum and Kilgour Streets. Done! This would allow construction of a modest wall to hold up the rest of the hill. Drivers along the new exit ramps could gaze upon the empty hillside and contemplate the first time a new Cincinnati highway destroyed a historic neighborhood populated by white people instead of black people. The city decided instead to go with the other plan, one that would leave most of the buildings intact but require a larger support structure: a 1,280-foot long, 100-foot deep retaining wall that would essentially act like the world’s largest and most supportive bra. As the calendar turned over to 1975, the cost had grown to $10 million, but it meant that remaining residents could stay, the new bridge would finally get its connectors, and most important, nobody would be fired or sued over the landslides. A finished design and a call for bids did not occur until late 1979, however, by which time the budget was $18.9 million. These things happen.

Four bids were submitted, the lowest being $4 million over budget. Oh, well. That bid was chosen, and work on the wall began. A full-page article-pictorial in The Cincinnati Enquirer from June 1980 sported the confident headline: “Mt. Adams Isn’t Going Anywhere!” It showed the massive pillars, the steel cables winding through them, and the enormous tunnel where constant monitoring and cable-tightening would occur. The wall would be completed in late 1981, at which time the construction of the bridge’s exit ramps—remember them?—could resume.

Unfortunately, most of this newspaper article turned out to be fake news. Four months after that sunny headline, Mt. Adams did indeed go somewhere: down. Everything suddenly happened all over again— landslides, cracks in homes, pipe breakages, shut-off utilities, and sudden evacuations. All construction work stopped, inspectors evaluated everything, about 30 more families were told to have a nice day, and once more, nobody was held responsible. These things happen. Residents of the hillside cried foul, having complained for weeks that the relentless pile-driving was rattling dishes and knocking pictures off walls. It also was driving them crazy. Experts countered that everything had been done by the book, and hey, don’t forget that our prime suspect, God, gave us an unusually wet spring and smote our fair city just a few weeks before with a rare earthquake, his wonders to perform.

OK, so now what? The Big Mac Bridge had been finished and was open to Ft. Washington Way, but still didn’t have the other crucial connections. Those approaches and ramps, originally budgeted for $22 million—the amount already spent on the retaining wall—were now seven years late, and work had barely even begun. A report from the U.S. Geological Survey predicted that the Mt. Adams landslide “will be one of the most costly to date in the history of the United States.” Boy, what a disaster.

Hey, wait a minute, there’s an idea! Ohio Governor Jim Rhodes wrote to FEMA, asking that all of Hamilton County’s landslides be declared a disaster and the county be eligible to receive federal funds. Local officials were not optimistic: They predicted FEMA would decline, since it defines “disaster” as a single catastrophic event, and not an increasingly laughable series of blunders made worse by their attempted solutions. As all this was going on, three more buildings on Baum Street, housing 10 more people, were voted off the island. These things happen.

It was ultimately decided that the best way to stabilize Mt. Adams would be to just finish the damn wall. That work was done very carefully, and it seemed to do the trick. The construction of the Big Mac Bridge’s approaches and ramps—hey, remember them?—could now resume. They were rescheduled to be completed by 1984. Okay, fine, summer 1985. Finally, it actually happened: traffic flowed in all directions on all the approaches and ramps that had been designed more than a decade prior.

So things ultimately worked out for everyone, except maybe the people who had been living at 357, 359, 361, 363, 365, 367, 369, 371, 373, 379, 381, 383, and 385 Baum Street. The city’s purchase of those properties, along with several on Kilgour, plus the cost of providing emergency housing after both landslides, are not even part of the project’s final tally: $32.4 million. That’s a bit higher than the original estimate of $6.3 million, a figure that, you may recall, included a choice: Completely demolish all of the homes in exchange for a modest wall, or save most of the homes but build a larger, uglier wall. In the end, we got the larger, uglier wall and still lost almost all of the homes anyway. But, all together now: These things happen.

Of course, maintenance has been ongoing. The Great Wall of Mt. Adams is only now almost finished, receiving its final (right, God?) outer surface as we speak. The inner miles of cables and caps will require adjustments and vigilance forever. But traffic between Newport and Cincinnati now sprays in all directions, and most of Mt. Adams’s western slope has been reinforced and rebuilt. And even if it all bears no resemblance to what used to be there, the same can be said of just about everywhere you look in this town nowadays. Time slowly forgives, and even forgets. Somewhere, Richard Nixon is laughing. 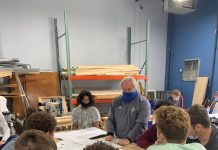