Oh, for the days when the United States Senate debated really important issues! Like, for instance, chili.

It is generally acknowledged that the Great Chili War of 1974 commenced when Senator Barry Goldwater (R-Ariz) took umbrage at the menu of the National Press Club in Washington, D.C. Press Club president at the time, a proud son of the Lone Star State named Clyde LaMotte, who also served as president of the Chili Appreciation Society International, had slipped “real Texas chili” onto the club’s menu.

On learning of this culinary affront, Senator Barry Goldwater (R-Ariz) proceeded to lay some kittycumbotty on both NPC President LaMotte and Senator John Tower (R-Texas).

[Footnote: A truly useful Spanglish word found in the rougher regions of Texas, “kittycumbotty” is the Anglo rendition of “¿Quire combate?,” Spanish for “Do you want to fight?”]

According to UPI, Goldwater angered Tower when he fired off a note to La Motte, expressing dismay at this Texas delicacy’s appearance on the menu. Goldwater’s note said, in part, “Texans can’t tell real chili from leavings in a corral.”

This of course raised the dander of Senator Tower who, according to the Cooperative News Service, responded in kind, “Comparing Arizona chili with Texas chili was like comparing Phillis Diller to Sophia Loren.”

Sensing a debate of significant import, a number of other Senators rushed to plant their own states’ flags in the midst of this battle. Jostling to the front lines was Senator Robert A. Taft Jr. (R-Ohio), who put both Texas and Arizona in their place with a 7 February 1974 speech on the floor of the upper house, “Each (Tower and Goldwater) likened the other chili to barnyard apples and possibly both spoke truly. The only real chili comes from Cincinnati, Ohio.”

Taft waxed eloquent on the virtues of Cincinnati Chili, enduring disdain from his colleagues and derision from columnist Frank X. Tolbert of the Dallas Morning News. Tolbert said, “Taft’s was the most verbose and pointless of all the chili speeches. Mr. Taft caused more than 9,000 words to be printed in the Congressional Record all about the cinnamon-flavored chili served over macaroni or spaghetti or in hot dogs by the ‘Balkan’ café operators of Cincinnati. Much of this was a reprint of a silly article about Cincinnati chili in Holiday Magazine.”

The author of that  “silly article” was a young history professor at Princeton University named S. Frederick Starr. Professor Starr, a Cincinnati native who later went on to become president of Oberlin College, did, in fact, publish an extensive paean to Cincinnati’s favorite dish in the May 1973 issue of the very upscale Holiday Magazine. That article was subsequently reprinted in the Princeton Alumni Weekly of 29 October 1974 and the Cincinnati Enquirer Sunday Magazine of 9 September 1973.

Among Starr’s claims in his article, “It is no secret that Cincinnati chili surpasses that of Texas, but it’s a well-kept truth, notwithstanding the fact that the genuine article is available locally at some two dozen establishments. One reason for the world’s ignorance is that those addicted to the fare at the Empress or Skyline chili parlors in Cincinnati rarely leave town long enough to spread the word.”

Senator Taft did his best. After Taft’s stirring oration at the Senate, Goldwater and Tower agreed to put the question to a vote, with representative samples of each state’s chili served during an ecumenical “Chili Week” at the National Press Club. In addition to Texas, Arizona and Ohio, Senators Joseph Montoya (D-N.M.) and Peter Domenici (R-N.M.) threw their hats into the ring on behalf of New Mexico. Senator Henry Bellmon (R-Okla) stood up for the Sooner State (claiming that a seven-course meal in Oklahoma comprised a bowl of chili and a six-pack of beer). Representative Lindy Boggs (D-La) of Louisiana talked her way into the competition, opening up the debate to the lower house of Congress as well as the distaff side of the political arena.

The Cincinnati Enquirer’s long-time political reporter Robert Webb, reported [1 April 1974] on an auspicious start for Cincinnati’s entry, “If it’s any indication of the quality of Cincinnati chili, the National Press Club (NPC) received more than its managers wanted—only to have to confess to Sen. Robert Taft Jr. (R-Ohio) demand was so heavy the club ran out before the city’s ‘chili week’ did. The big test comes Thursday night at the ‘chili cook-off,’ with Taft expected at the NPC to defend his hometown’s brand against that of Sens. Barry Goldwater (R-Ariz), John Tower (R-Texas) and champions of other recipes.”

Alas, Senator Taft and Cincinnati did not triumph, and were ridiculed mercilessly. The editor of the Princeton Alumni Weekly lampooned Ohio’s entry in his introduction to Starr’s article, “The Cincinnati team arrived in an immense limousine with a huge tub of chili that slopped over the edges onto the floor of the car and onto its shoes. It did not win.”

George Kentera of the Detroit News recorded the following exchange:

“‘You can’t even get close enough to get any of that Ohio chili,’ said one taster.

“‘They’re all jammed around there to give it back,’ said another, disenchanted with chili served with spaghetti and cheese.”

Although Cincinnati was an also-ran in the Great Chili War of 1974, we shall leave Professor Starr with the last word on this topic.

“What do Jerry Rubin and Robert A. Taft, Jr., have in common? Precious little, of course. But both know that without question the best chili on earth is made in their home town, Cincinnati. And only in Cincinnati. Thirty miles down the Ohio, in Rabbit Hash, Kentucky, Cincinnati chili is unknown. The same distance up stream, in Moscow, Ohio, it is alien as Peking duck.” 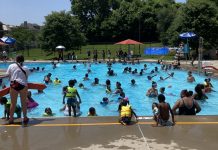