Photos of Cincinnati’s National Theater From Historic American Buildings Survey, circa 1934 Digitized by Library of Congress

At Cincinnati’s National Theater, the upstairs action was much hotter, even in the 1840s. The “third tier” or gallery was reserved for “Femmes du Pave.” In other words, prostitutes.

The National Theater was located on the east side of Sycamore just north of Third Street, where the Great American Tower now rises into the sky. The National was not unique in setting aside a balcony for ladies of the evening. According to Claudia Johnson, writing in the American Quarterly [December 1975], most American theaters had reserved the “third tier” for prostitution since the mid-1700s.

“By the nineteenth century the third tier had become an understood theatrical appendage. Femmes du pave were welcomed into the gallery of New York’s high-class Park Theater from the time of its opening in the late eighteenth century. Its lower-class counterpart, the Bowery, opened in 1826, reserving the gallery for the same clientele. By the 1830s and 1840s, the relinquishing of the third tier to prostitutes had become an established national tradition, not only in New York, but in most large cities, including Boston, Chicago, Philadelphia, St. Louis, Cincinnati, Mobile, and New Orleans, among others.” 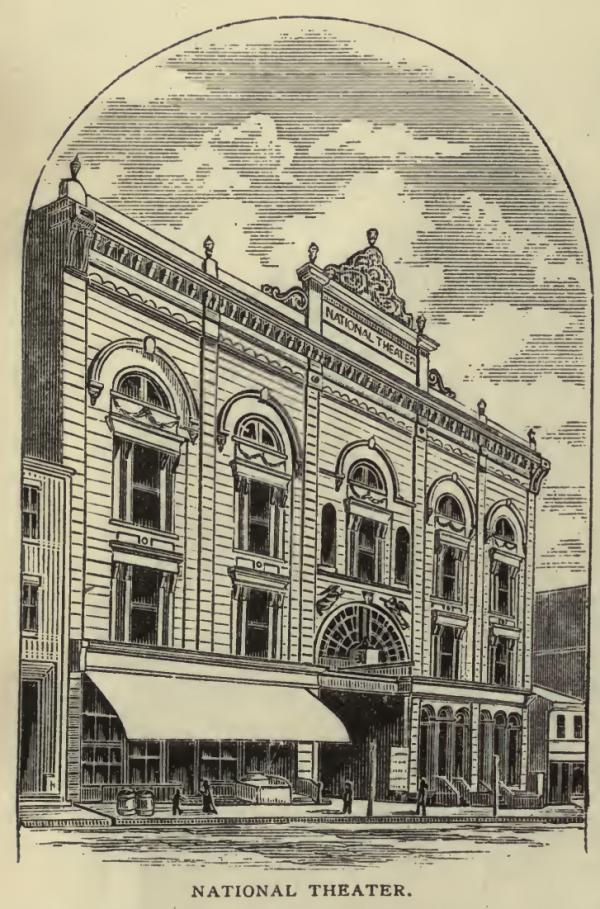 The ladies of the third tier were usually of the lower class of prostitutes, according to Johnson. Most theaters had a separate entrance for the third tier so that respectable patrons did not have to associate with the riff-raff. Higher class prostitutes found ways to meet clients in the dress circle, or the parquet:

The Cincinnati Enquirer [7 November 1845] described an effective ruse employed by the “Cyprians” of the National Theater’s third tier to invade the lower levels of the theater.

“At concerts, and all other respectable places of resort, it is the custom to exclude ladies who are not accompanied by gentlemen. In order not to come under this ban, the girls of the pave, we learn, have resorted to the expedient of hiring the children of poor parents, dressing them in good apparel, and taking them to places of amusement, and promenading the streets with them—thus passing for widows or ladies with absent husbands.”

Having gained entrance to the respectable parquet or dress circle, these faux widows made their assignations and took their clients off to a nearby hotel or brothel, while the children—no longer needed—were sent home.

Parents who rented their children for this purpose, according to the Enquirer, received as much as five dollars a day—handsome wages at that time—and new clothes for their children. The prostitutes, it was reported, were excellent baby-sitters and treated the children well.

The notoriety of the National Theater was such that a mere reference to the third tier became an insult in the days when Cincinnati battled several competing daily newspapers. One day, for example, the Enquirer gave a good review to a coffee shop that provided a “splendid lunch” on Sundays. The competing Cincinnati Commercial huffed that any place that would serve lunch “on the Sabbath” probably also provided “extras” and that they hoped the police were watching. The Enquirer [30 August 1853] replied in kind:

“The city editors of the highly scented, moral sheet from which the above is taken, we presume, are sufficiently refreshed nightly at their favorite saloon in the third tier of the National Theater, where they enjoy the lascivious luxuries and caresses of its frequenters, to be envious of any establishment that is conducted upon principles that are not consistent with the morals of those who labor incessantly on the Sabbath-day.”

Prostitution was not the only snare residing on the third tier. Petty thieves and pickpockets hung out in the gallery to fleece the enamored and the sozzled. The Enquirer [20 November 1845] gave a warning:

“We are informed that a young gentleman visited the National Theatre on Tuesday evening and had his pocket picked of some small articles. He should have kept out of the third tier. If a man meddles with soot he must expect to get begrimed.”

The National Theater survived more than a century. First opened in 1837, it was Cincinnati’s top theater for many years and witnessed performances by Jenny Lind, Lola Montez, and the entire Booth family (Edwin, John Wilkes and Junius) until it fell out of favor in the 1880s and resorted to burlesque, circuses, and other lowbrow amusements. By the 1920s, the big old auditorium was rented out as a tobacco warehouse. The National Theater was demolished in 1940.