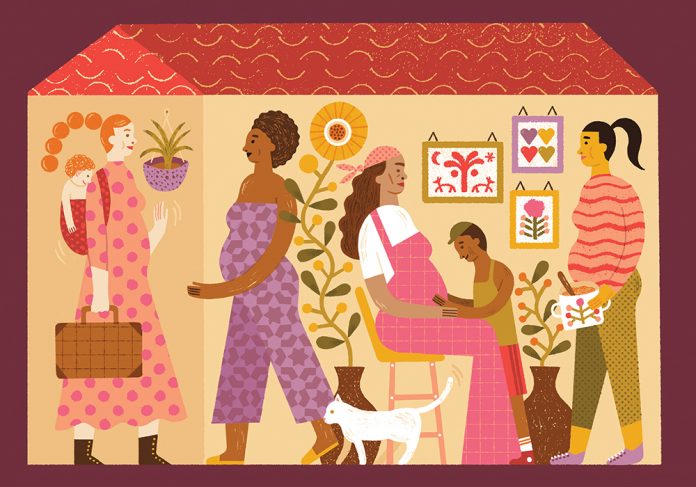 Meridith Owensby rings the dinner bell right at 6 p.m. The kitchen counters sag with donated food—a glazed ham, baked potatoes, corn, fruit, and homemade sliders left from the night before. Shardey Munden tucks her five-month-old daughter, Sage, into a high chair and fills plates for herself and her 7-year-old daughter, Sheena. She lived at Lydia’s House for about four months in 2017, and returns often for meals, outings, and to catch up with old friends.

“I still practically live there,” says Munden, recounting her journey from West Palm Beach, Florida, to a nondescript, life-saving house in Norwood.

In Hollywood, Harvey Weinstein’s victims launched the #MeToo Movement. In New York, women in media took down Matt Lauer and Charlie Rose. On the day after the inauguration and its first anniversary, women wearing pink hats and waving angry signs joined marches across the country to share their rage over discrimination, harassment, misogyny, marginalization, and outright assault. Meanwhile, in a rugged corner of Norwood, Owensby and Mary Ellen Mitchell are waging their own kind of #MeToo battle. For the past four years, they’ve taken in some of Cincinnati’s most marginalized women—mostly young, black, poor, pregnant, and without a place to live—and given them a home. Using donated dollars and largely donated help, their organization, Lydia’s House, has rescued 71 “guests” and their children from homelessness. It is, they believe, one of the few shelters in town where a woman with children can live while pregnant and just after giving birth.

Munden is among the graduates. Newly pregnant with Sage in early 2017, she left Florida to live with the baby’s father and his step-mom in a local hotel room. The father ended up in jail for physically abusing her, leaving Munden with the step-mom. “It wasn’t good. I was ready to leave,” she says. A week of fruitless phone calls proved what Mitchell and Owensby already knew: Munden had few options. “Everybody was booked out,” she said. “I was going to be in the Drop Inn Center.” She finally got in touch with a caseworker who gave her a brochure for Lydia’s House and told her to call the number. There happened to be an open room, and Mitchell talked her through the online form. Munden moved in that May. “God opened the gates of heaven, and Lydia’s House came through.”

In short order, Munden, now 24, had a plan of action. With the help of Lydia’s House staff, she enrolled Sheena in five summer camps, enrolled herself in a medical assistant program, and prepared for her baby’s birth. She abided by the house rules: no alcohol, no drugs, wake up early, be home by the 10 p.m. curfew. After about four months, she was able to move into to her own subsidized apartment in Camp Washington. When Sage arrived soon after in October, Lydia’s House staff and friends rotated in and out of her hospital room to help. Munden has no family in Cincinnati—“just me and my girls”—but Lydia’s House remains the backbone of her support system.

Munden has much in common with many of the women who have landed at Lydia’s House over the past four years. The average guest is African-American, about 25 years old, with a child under 3 and another on the way. Half have spent time in foster care. A third have been abused by a partner. Half have been diagnosed with a mental health issue. One young woman, who had her second child while a guest in 2016, grew up in a chaotic and abusive household and spent her teen years as a ward of the state of Nebraska. She moved constantly, looking for stability, before finding it at Lydia’s House. Another came to Cincinnati from Milwaukee at 17 and wound up pregnant and alone at 20. She found refuge at Lydia’s House after sleeping on random people’s couches and then in her car. She detailed her story in the organization’s newsletter under the pseudonym Olivia, writing: “Complete strangers were loving enough to open their doors to me and my daughter.”

Mitchell, 36, and Owensby, 37, met in college in Atlanta. Owensby was recruiting for 5:45 a.m. Monday breakfast duty at a homeless center, and Mitchell happened to volunteer. They’ve been friends ever since.

Mitchell grew up in Anderson Township and Northern Kentucky. She majored in anthropology at Emory University and later got a master’s in theology at Xavier University. Raised in a Pentecostal home, she lived and worked in Ghana; Mexico; and Washington, D.C., before settling back in Cincinnati. She and Ben Eilerman, her husband of a decade, have three young children. Owensby was originally from Atlanta, where she earned a mechanical engineering degree from the Georgia Institute of Technology. After college, she worked at a Washington, D.C., home for homeless women with AIDs or HIV. She got her master’s degree in rehabilitation and ended up in Cincinnati, initially living with Mitchell and Eilerman in their Norwood home before settling into her own apartment in the neighborhood. Both women volunteered at Grace Place, a shelter for homeless women in College Hill, and even considered seeking management roles there. “It didn’t work, but it made me realize how much I missed that work and that life,” says Owensby. Together, they recognized the need was great enough to do something similar in Norwood.

By May 2012, it was decided: They would create their own home for homeless women and  name it for Lydia, after a woman in the Bible’s New Testament who welcomes the apostles into her home. The house would welcome children and be located in their community, near bus lines, shopping, medical services, schools, a public library, and a YMCA. They’d give women the help and encouragement they need to get back on track—as quickly as possible—and then they’d help send them on their way. As women of faith—Mitchell is a member of Bellarmine Chapel at XU; Owensby is a former member of the Episcopal Church of the Advent in Walnut Hills—they would use Lydia’s House as a source of ministry and raise funds for it as a nonprofit.

Things moved fast. The duo spent nights and weekends pitching the project at churches and social service agencies around town. In January 2013, all of that evangelizing paid off at their inaugural fund-raising event, a standing-room-only affair at Owensby’s church. They raised $17,000 that night, with an anonymous donor kicking in another $20,000. A month later, they bought a run-down, 113-year-old house in west Norwood for $40,000. By April 2014—after more than a year of renovation under the direction of Eilerman, an architect, and a team of regular volunteers—Lydia’s House welcomed its first guest and her son. The house, zoned to accommodate four women (with up to six total children) and two associates, has been full ever since. Referrals come in from all over town, especially via former guests and local caseworkers. “When we send out an e-mail saying we have a room, in a day, we might get 18 calls,” says Mitchell.

Guests of Lydia’s House must follow a set of rules if they want to stay there. They are expected to be at home for dinner Sunday through Thursday, and must be in for the night by the 10 p.m. curfew. They are asked to keep their rooms tidy. They cannot use drugs (they are screened); if they’re 21, they can drink outside the house, but they must return sober. They are required to work or enroll in school or another educational program, all things Lydia’s House will help them with if they need it. If they work, half of the income goes toward house expenses. They have to sign any children up for childcare or school, and must be physically ready to deliver the babies they are carrying. They are expected at house meetings and invited to house worship. Within the first month, they are expected to create a plan to leave, typically, by the three- or four-month mark. In exchange, Lydia’s House helps with all manner of life issues: scheduling doctor appointments, counseling, securing transportation. The aim is to help women create the framework for a better life. “We engage in a lot of interventions,” says Mitchell.

A year after the launch, she and Owensby bought a second house, also in west Norwood, to serve as an office. In their first 18 months, they raised $265,000, which went toward buying the properties and maintaining the houses. Neither woman took a salary.

Among the organization’s key fund-raisers is Maria Krzeska, a cancer researcher at the University of Cincinnati who heard one of the pitches for Lydia’s House at Bellarmine. Despite having no prior connection to homeless or women’s charities, Krzeska and her husband, Robert, a local pediatrician, now host upwards of 80 Lydia’s House supporters at their annual Women For Women event each fall. Friends and family cook, men are servers. They set up a buffet line in the garage of their Avondale home. Women stand elbow to elbow in the yard listening to guest speakers and the MUSE Cincinnati Women’s Choir. Over five years, the Women For Women events have generated nearly $200,000 in donations.

Krzeska missed the traditions of her upbringing in Poland and was enthusiastic about the prospect of starting her own in Cincinnati, specifically one that would bring more women into her life, which had long focused on her husband and two young-adult sons. It’s a sentiment at the root of Lydia’s House and its overall mission, where guests are encouraged to build relationships with the all-female staff and each other. It’s a luxury that many have never had before. “A lot of our women come in and say, ‘I have no one,’ ” says Owensby. “[Now] we have people who say, ‘I left here knowing I can make friends.’ ”

On a rainy Friday in late March, Ben Eilerman walks through the cavernous halls of a vacant Norwood structure that once housed eight apartments, stepping around puddles and ducking through drips. Located near the Vineyard Central church, the 108-year-old building is the yet-to-be-named second location of Lydia’s House. Mitchell and Owensby bought it for $130,000 last year and intend to use it as a low-rent housing option for the women of Lydia’s House. They’ve already raised about $700,000 of the total $1 million budget for the project. Individual donors remain their go-to for dollars—they have 676 names on their donor list, with a typical gift amount of $150—but this year, they added their first-ever government dollars in the form of a $50,000 Community Development Block Grant from Hamilton County.

The demo work finally behind them, Eilerman and volunteers began renovations this spring, with hopes of a late 2018 opening. Eilerman stresses that everything will be new—kitchens that open to living rooms, bathrooms and bedrooms, walls and fixtures—and in good order. “The families have gone through so much disruption already,” he says.

Plans for the space on the first floor are fluid. A common gathering space for residents? A childcare center? Regardless, Eilerman, Mitchell, and Owensby say Lydia’s House graduates are eager to get in, but that apartments will be open to others as well. “We’ve essentially already started that waiting list,” says Eilerman. “We’re going to be very intentional about who moves in here. We want this to be successful.”

Shardey Munden is among those on that waiting list. She’s aiming for the three-bedroom apartment—one room for her and each of her two daughters. When she talks about the new location, she jokingly suggests it be advertised as seven apartments instead of eight, so no one else gets the one she wants. “I want to be closer to them,” she says of her original Lydia’s House friends and supporters. “They’re my family. They are definitely my family.”