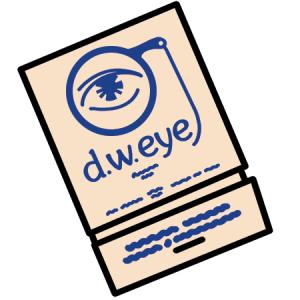 Clifton was a hippy town, a mini-Haight Ashbury, but smaller and a bit cleaner. It was the University of Cincinnati’s campus and during the ’70s the area was alive with bars, boutiques, head shops, and restaurants like Zino’s Firehouse Pizza, In Cahoots (with its mile-high Reubens), and the Beacon-sized Bogart’s.

Hidden on the corner of West Clifton and Calhoun—under a giant black and white sign in the shape of a monocle—was a nondescript hole-in-the-wall called d.w. eye.

Saturday night. My debut. The crowd—yes, an actual crowd with 30-plus and counting—filed in. In the back, near the bar, comics fidgeted. Waiting was unbearable and jokes and bits buzzed in my brain like etymological mayflies. I killed time by hiding out in the eye’s cellar.

Drew Hastings was in the bathroom throwing up. Drew was far and away the tallest, best-dressed, best coiffed comic at the eye. “Out in a sec,” he yelled, gargling and splashing water.

Drew opened the door, shook out his mane. In his hand, he cradled a petite coffee cup.

Two friends of mine sat at a small table close to the stage. I noticed mini-cassette recorders—like little transistor radios—on a lot of tables. Comics recording their acts. The room, which had grown to 45 to 50 people, felt like a full house. They seemed like a nice crowd, mellow with low expectations. In the back, Roger—the emcee and captain of our ship—laughed a clear, strong, fake laugh, as if to say: It’s my show folks, if they go down I go down.

Suddenly I heard him say these words: “Next up is a young man who’s been writing for WAIF radio. Let’s give a warm welcome to Alex Barn-stein!”

And I was on stage.

Bonus! Bernstein tried out many, many jokes at d.w. eye. Some killed, others died. You be the judge of this one: My mom’s a terrible cook. In our kitchen we haven’t got a timer, so she uses the smoke alarm. She made steak the other day. I said, “Make mine rare.” To my mother “rare” means “unique.” It came back burnt and covered with glue.