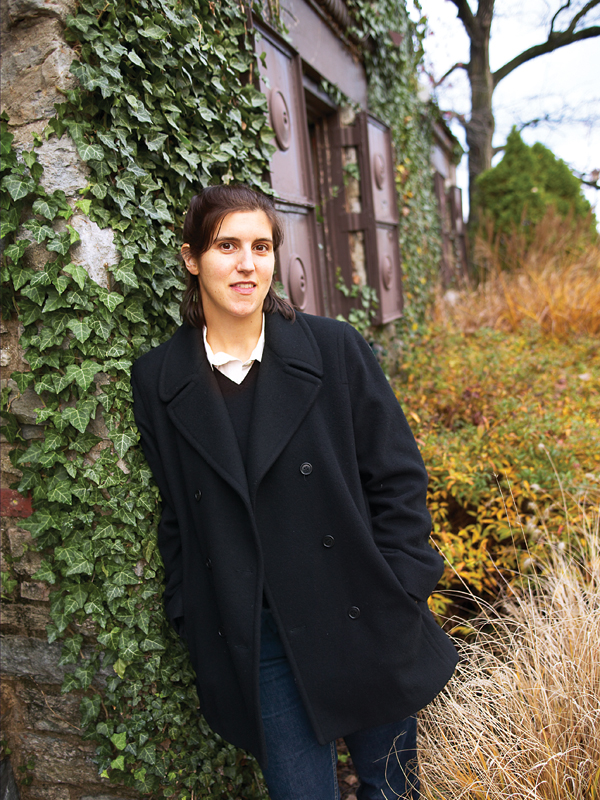 Cincinnati acts as Curtis Sittenfeld’s time machine: She’s 29 now, but feels like she’s 14 every time she comes home to her parents’ house. Fourteen happens to be the age at which Sittenfeld left home for Groton School, in Massachusetts, and her tenure at boarding school is what inspired her first novel, Prep (Random House, $24.95), published this month. Now living in Washington D.C., where she teaches high school English (yes, at a prep school), Sittenfeld took a break to establish that Prep is a work of fiction (not nonfiction, Mom and Dad), and that Graeter’s black raspberry chip is a work of art.

Curtis, I’ve known you since you were 16, in boarding school at Groton, and I was an old woman of 23 working at Seventeen magazine. So when I read Prep, I kept finding myself thinking: This stuff is so racy, I had no idea! Is this what happened to Curtis and she never let on?
I think it reads as much truer than it is. Lee [the main character] reveals a lot of embarrassing things about herself and you might feel like, why would someone write this if not to exorcise some of their own demons? And the more I deny it, the more true it seems. I can’t really fault people for thinking that.

The family in the book is so different from your family, as I know them—which is to say, as the friendly people who used to answer the phone at your house in Cincinnati when I called for various magazine business. But in the book, the relationship between Lee and her dad is so tense.
The bad news for my parents is that I am sure I will write a book about them someday. The good news is, this isn’t it. My biggest concern with this book was making my family feel strange. My parents haven’t read any of it yet. I am giving them a copy this weekend.

They haven’t seen any of it?!
Would you want your parents reading stuff you had written about sex?

One of the things that I loved so much about the book was the parody level of the WASP names of the kids, girls with first names like Gates and Aspeth, and boys named McGrath Mills and Cross Sugarman.
When I went to Groton, there were so many girls with boy’s names, and so many boys with a last name as a first name. Piper and Brantley were girls there, and there was a boy named Ware. All my life and ever since, I’ve been asked about my own name, but never once when I was at Groton.

You teach ninth-grade English at St. Albans, an elite private school in Washington, D.C. Are you worried about your students or their conservative parents reading the book and being scandalized by its sexiness?
The thing is, we’re reading The Odyssey, and there is so much sex and violence in it, and Great Expectations, which is driven by Pip’s obsessive desire for Estella—which is not to say Prep is The Odyssey or Great Expectations, but there are some common themes. I was teaching a section about the publishing process and brought in some galleys, and [my students] found some swear words and were shocked and excited. After they found the raciness, I told them I try to depict what this girl’s life is like in a detailed way: There are sexual situations and they are depicted the same way as everything else. It’s not supposed to be titillating, it’s supposed to be accurate. It’s not supposed to be gratuitous. I asked one of the students if he knew what gratuitous means, and he said, “Enjoyable?”

The book may be about high school, but I think you need so much more perspective about high school, the kind that comes when you’re an adult, to truly appreciate Lee’s insight.
A friend of mine, a gay guy in his late 20s, said he overwhelmingly identified with the Cross Sugarman story line because he had recently been dating a shrink and they had just broken up. And I thought, if a gay guy in his late 20s can feel Lee’s pain, then anyone can. And a friend of my sister read it and she dreamed about sitting next to Cross Sugarman in chapel.

My friend David Rakoff [author of Fraud] read it and said he loved how all the boys, no matter how they were jerks to the girls, seemed like the most adorable, attractive high school guys.
I used to write things where my own bias against one of my characters was really apparent. And one of my teachers at Iowa, either Ethan Canin or Chris Offut, said you have to love all your characters.

Can we back up for a second? I had always thought you were from one of those families that sends all its kids to boarding school. I didn’t know you were the only one who up and left Cincinnati. How did that happen?
I went to Seven Hills School from pre-K through eighth grade, and my siblings went there from pre-K to senior year. When I was in eighth grade, a rep from the admissions office from Groton came to Cincinnati, and my father just wanted us to be exposed to the option of boarding school, and I became enthralled by the idea, not unlike Lee in Prep, based on what I’d seen on TV shows and books I’d read. Did you ever read The Girls of Canby Hall?

Was it like the comic strip Apartment 3G?
It was a series of books that was pretty big in the ’80s. I loved the books. They were at a girls’ school in Massachusetts, and they would meet a boy for a soda or something very wholesome. It wasn’t racy, but it seemed exciting, and I think in eighth grade I felt ready for a new adventure. My parents weren’t very eager to have me go. I was 13 and I lobbied for a long time for them to let me go.

Your family seems like the raucous, loving group that would make for a great series of books for eighth grade girls. I can’t believe you left.
I felt weird about leaving my family, because my family is close. I don’t think I understood what I was doing. I just really wanted to go, and made an argument that implied a greater understanding of the situation than I actually possessed. Prep school seemed glamorous.

Was it what you expected?
Part of being a teenager, or part of being a person in general, is a lot of times feeling really consumed by the situation you’re in, and having trouble maintaining a sense of perspective. I always did feel really consumed by Groton. And at the end of the book, Lee laments the fact that she hasn’t felt as all-consumingly interested in anything since.

What did you miss?
I missed my family, the daily household interaction where you end up watching 15 minutes of Jeopardy! together, or standing at the stove looking at food you’re not supposed to eat yet. My siblings were so young when I left, I look back and think, Oh my God, Jo was 9 when I left and P.G. was 5, and I feel like I missed their childhoods. I sound like a negligent parent.

Was it weird to leave the Midwest?
I know the grass is always greener, but when I was at Groton, there was a girl we knew who was invited to the prom at the public school she used to go to, and we were all overcome by amazement and envy and mystification. Here’s something else I missed out on: High school is the time that you get to know the city you live in on your own, with your friends and without your family. And I didn’t get that. To this day I don’t know the names of streets. When I come home I act like a 14-year-old. I might go rent a movie, but I’ve never gone out drinking for an evening. I didn’t have that experience people have in high school, like, this is where to go and get served alcohol, or this is the store that doesn’t ID.

And you lived at home this past summer, right?
Yeah, I was home for two months, the longest time since high school. All my siblings were home for a while, and we rediscovered Graeter’s. We had a few relatives stay with us, and we would go buy four pints and then dig in after we ate dinner. My dad was in the hospital for six weeks, and when he came home, we got out the ice cream and passed it around, and he was like, “Who are you?” We were all zestily digging into the pints with our spoons. It had become our ritual. To him, we looked like wolves.

Did you overlap with the cicadas?
My sisters and I would go running in the morning, and we would look down and there would be cicadas all over our shirts. It was sort of biblical.

With all your siblings back at home for several weeks, did you feel just like a sulky teenager again?
We all shared a car, my Taurus that doesn’t go faster than 50 miles per hour. We divvied up chores—I unloaded the dishwasher and did the grocery shopping at Kroger and Wild Oats. We definitely went to a lot of movies and ate a lot. And we had a lot of screaming fights. We know one another very well, and we’re all opinionated and not shy about expressing ourselves. When people say about us, “You guys are so close,” I say, “We fight all the time.” People think, Oh, ha-ha, you’re just self-effacing. And I think, No, we fight all the time.

In Prep, Lee’s father finds a magazine on her desk and starts making fun of it. Did you read trashy magazines back then?
I read so much, and so indiscriminately. My reading was a lot purer back then; I read it because I wanted to read it, not because people were talking about it, or because my friend wrote it.

Teenagedom is like that—no job, all kinds of vacation time.
And prep school makes it more isolated. You can watch TV or talk to people and read. There might have been one phone per dorm, and the TV was set to something you didn’t want to see. You once sent me a novel called Life-Size, by Jenefer Shute, and I read it and then, like, five other girls in my dorm read it. I miss that.

But maybe you could start a read-it-one-at-a-time book club?
I feel really pretentious saying this, but my time is structured in such a way that I don’t do things so spontaneously. I don’t think I’m managing my time that well, teaching and preparing for teaching and writing fiction and freelance articles—and staring off into space eating animal crackers.

Photograph by Ryan Kurtz
Originally published in the January 2005 issue.