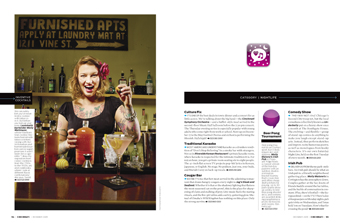 We can safely bet you’ve never tried a cocktail with tobacco in it. But before you turn up your nose, Lavomatic bartender Molly Wellmann, whose Marlboro Man cocktail features homemade tobacco bitters (along with Bulleit bourbon and homemade bourbon vanilla sugar), promises it won’t taste like a cigarette. “I draw my inspiration from classic cocktails from the 1700s to the 1950s, art, and cookbooks, where I look at different flavor combinations,” she says. Salúd. (513) 621-1999

It’s one of the best deals in town: dinner and a concert for as little as $10. We’re talking about the big band—the Cincinnati Symphony Orchestra—and a buffet-style meal served in the second-floor Music Hall ballroom before the 7:30 pm concert. The Thursday evening series is especially popular with young adults who come right from work or school. Next up on December 17 is the May Festival Chorus and orchestra performing the Messiah. Hallelujah! (513) 381-3300

Most Americans understand karaoke as a drunken rendition of “Don’t Stop Believing” in a smoky bar with strangers. Not so in Riverside Korean Restaurant’s private karaoke room, where karaoke is respected for the intimate tradition it is. For $25 an hour, you get a private room seating six to eight people. The 41-inch flat screen TV projects pop-hit lyrics in Korean, Japanese, or English. No stage. No podium. Just you, your buds, and Mariah Carey on back-up vocals.(859) 291-1484

Maybe it’s all that hot meat served in the adjoining restaurant that draws hungry cougars every night to Jag’s Steak and Seafood. Whether it’s that or the shadowy lighting that flatters the most seasoned cat on the prowl, this is the place for sharpening of claws and stalking of prey. Live music fuels the mating rituals, and the fire-pit tables add a sultry, quivering glow. Mutual of Omaha’s Wild Kingdom has nothing on this place: Only the strong survive. (513) 860-5353

They may not rival Chicago’s Second City troop yet, but the local comedians collectively known as Underbelly put on a funny show once a month at The Southgate House. The evolving—and flexible—group of stand-up comics do anything to make you laugh except stand-up acts. Instead, they perform sketches and improv, recite humorous poetry, as well as monologues from kooky characters. It’s our own Saturday Night Live, held on the first Tuesday of every month. (859) 431-2201

Deliver us from theme park-style bars. An Irish pub should be what an Irish pub is: a friendly neighborhood gathering place. Molly Malone’s in Covington has the atmosphere down. Couples gather at the bar, knots of friends huddle around the bar tables, and the burble of conversation is constant. (Plus, there’s football—the European kind—on the TV.) There’s also a bluegrass jam on Monday nights, pub quiz trivia on Wednesdays, and Texas hold ’em on Tuesdays. How’s that for crossing the pond? (859) 491-6659

There are more contemporary bathrooms; there are bathrooms that provide you with novel entertainment or free toiletries. But for sheer cool elegance, nothing outclasses the ladies’ restroom in the lobby of the Cincinnatian Hotel. Heavy mahogany doors shutter three individual stalls; two deep glass sinks are etched with a whirl of tulips; the marble floor features a compass rose. A laundry basket is provided for cotton hand towels, and the lovely lavatory is always spotlessly clean. Talk about a royal flush. (513) 381-3000

There are some local boys who know how to take the inherent cheese of a cover band and spread it onto a golden cracker of rock. Man Halen, which consists of current and former members of The Chocolate Horse, Caterpillar Tracks, The Murder Junkies (seriously), and Mellow Gold, plays “Sammy-free” vintage Van Halen only, which, in case you haven’t noticed, takes talent. These guys have it, and they know how to wrap it tightly in spandex and use it to blow your mind. www.manhalen.blogspot.com

We hope you know, but can’t assume, that at 2:30 each Sunday afternoon throughout the deep fall and winter months behind the wood burning stove in the Rabbit Hash General Store, you can see and hear some of the best bluegrass (and other) musicians this region has to offer. Store owner Terrie Markesbery’s “Behind the Stove” concerts always feel like a long-lost family reunion. Please tell her we sent you. (859) 586-7744

For those of you who must inhale, do it at The Avenue Lounge in Covington. A former strip club transformed by co-owner Damien Sells in 2006, The Avenue has high ceilings and powerful ventilation—even the over-compensating cigar-smoking crowd is welcome. (859) 261-6120

To elevate your palate beyond that flavorless, light American lager you relied on in college, head to Dilly Café Wines & Gourmet, where you can begin your path to enlightenment. Dilly Café always has at least three Belgian-style brews on tap, like Tripel Karmeliet (a pillowy three-grain blond ale), Duchesse de Bourgogne (a sour ale), and Chimay Blanche (a Trappist blond ale with eight percent alcohol); nine by the bottle; and nearly 70 varieties for takeaway sale. Bartenders here serve each beer in its own brewery-specific glass, which helps oxidize the beer and open up each of its complex flavors (yes, beer actually has distinct flavors!). Once you go Belgian, you won’t ever go back. (513) 561-5233

Tron. Dig Dug. Joust. Ms. Pac-Man. Tetris. If you’re a gamer who grew up in the late ’70s or early to mid-’80s, these names meant something to you. Scratch that, they meant everything to you. You spent every waking hour at the arcade wasting quarter after quarter on these and other classic joints. Here’s your chance to reclaim your youth at Arcade Legends. For a miniscule fee—$10 Sunday through Thursday; $12 Friday and Saturday—this Fairfield shop lets you play until your heart’s content. You get the cheesy (Michael Jackson’s Moonwalker) and the outstanding (Galaga), all in one spot. And don’t worry: They also have Xbox 360, Playstation 3, and Wii for you youngsters. Game on! (513) 874-8766

A night at Adonis the Nightclub is like stepping inside an episode of the defunct Showtime series Queer As Folk—pulsating house and techno music, writhing bodies, and lots and lots of hair product. Located in what used to be Michael G’s Restaurant, this sprawling complex was named one of the “60 greatest gay bars in the world” by Out.com in August. And with three bars, a pool, a cabaret room, and one massive dance floor, we certainly can’t disagree. Watch out for the cougays! (513) 871-1542

Andy’s Mediterranean Grille is a Lebanese wonderland, full of overflowing plates of shish tawook and cups of Lebanese coffee. But the best part? The hookahs—water pipes loaded up with flavored tobacco. For $12, pick one from the selection that lines the bar room wall, add tobacco (there are three types to choose from; apple’s our favorite), and light it up. That and the Middle Eastern music pumping throughout the dining room make for one trippy experience. Put that in your pipe and, well, you know the rest. (513) 281-9791

Imagine you’re in a theater watching Quantum of Solace when, as Bond takes the first taste of his Vesper Martini, a waiter quietly hands you your own Vesper, which you sip contentedly as you recline in your soft faux leather chair. All of this is possible at the Showcase Cinema De Lux in Florence, where “lux level” guests can enjoy drinks, food, and a premium view of the show (the Springdale location does not offer in-seat drink service). Now that’s entertainment. (800) 315-4000

Cincinnati Observatory. There’s public viewing most Thursday and Friday nights, as well as one Saturday evening each month. www.cincinnatiobservatory.org

* Please note that the information listed in this section was accurate at the time the issue went to print in 2009 and that addresses, menu items, company status, etc., may have changed. Please contact the companies to confirm details.