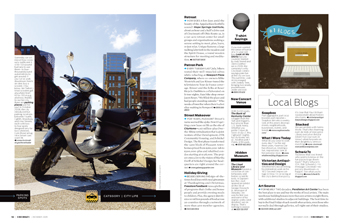 Someday we will realize how colossally inefficient it is for 150-pound humans to use three- to four-thousand pound automobiles to get around. If you live or work downtown, here’s an idea: buy a scooter. (You know, like Tarbell.) Most scooters get anywhere from 60 to 100 m.p.g., and now, thanks to our fair city, there are parking places just for you! In October 2008, the city introduced five parking locations between Fourth, Eighth, Broadway, and Vine Streets, each with two to four spots designed only for two-wheelers. Even those smug little Smart cars won’t fit. www.cincinnati-oh.gov/twowheeler

How does a few days amid the beauty of the Appalachian foothills sound? Hope Springs Institute, about an hour and a half’s drive east of Cincinnati off Ohio Route 32, is a 130-acre retreat center for small groups and organizations seeking a serene setting to meet, plan, learn, or just relax. Unique features: a large walking labyrinth in the meadow and the Spirit House, a round wooden structure for meeting and meditation. (937) 587-2605

Every Tuesday last July, bikers rested their well-muscled calves while refueling at Newport Pizza Company, where co-owners Mike Westrich and Lee Kinzer tuned the television to Tour de France coverage. Kinzer and the folks at Reser Bicycle Outfitters collaborated on le tour nights. Says bike shop owner Jason Reser, “We filled the place and had people standing outside.” Who needs a PowerBar when there’s a hot slice waiting in Newport? (859) 261-4900

For years, Pleasant Street’s name seemed like a joke. Now it’s getting a new lease on life as the site of CityHome—a $7 million-plus Over-the-Rhine revitalization that’s a joint venture of Eber Development, OTR Community Housing, and Schickel Design. The first phase transformed the 1400 block of Pleasant: townhomes priced from $260,000-ish to $300,000-plus and rehabbed condos starting at $128,000. The project owes a lot to the vision of Martha Dorff of Schickel Design; her headquarters are right around the corner. www.gatewayquarter.com

Besides serving the sign-of-the-times food lines with meal giveaways at Thanksgiving and Christmas, Freestore Foodbank runs a plethora of programs that clothe and house people and provide evening meals to children. Plus, the agency distributes 10 million pounds of food across 20 counties through a network of more than 400 member agencies. (513) 241-1064

For nearly two decades, Pendleton Art Center has been the best place to see and buy the works of local artists. The main warehouse building houses more than 200 artists on eight floors, with additional studios in adjacent buildings. The best time to buy is the Final Friday of each month when artists, even those who normally deal through galleries, sell right out of their studios. (513) 559-3958, ext. 1257

If you ever wanted the sense of humor of a 14-year-old boy, Look At Me Shirts has you covered. Started by Josh Sneed and Darin Overholser in 2006, the company’s witty Cincinnati-centric sayings poke fun at the city we love. This summer, Look At Me merged with Donkey Tees, bringing two snarky powerhouses under one roof. (859) 371-1231

With 9,400 seats, The Bank of Kentucky Center is bigger than the Taft and Bogart’s, but smaller than U.S. Bank Arena. Whether you prefer Cirque de Soleil or Jay-Z, this Highland Heights facility books ’em all. Another perk? Plenty of $5 parking. (859) 442-2652

The Lloyd Library and Museum houses a collection of con-temporary and historic scientific texts. In September, the Lloyd opened an exhibit on the life of George Rieveschl Jr., developer of Benadryl. Art was his first love, and some of his original works (and doodles!) are on display. That’s nothing to sneeze at. (513) 721-3707

What I Wore Today

What do you wear to work every day? For the last three years, Kasmira Oar has shown us, creating a fun, inspirational look at her personal style. www.whatiwore2day.blogspot.com

Whether he’s documenting his restoration work on his 1872 Second Empire cottage in Knox Hill or railing at the city’s demolition policy, it’s clear that Paul Wilham is passionate about historic structures. victorianantiquitiesanddesign.blogspot.com

We are smitten with Nemo Wolfe. That’s the charming nom de Web of Mercantile Library executive director Albert Pyle (our own Dr. Know) when he posts on their delightfully omnivorous blog. www.cincinnatimercantile.wordpress.com

* Please note that the information listed in this section was accurate at the time the issue went to print in 2009 and that addresses, menu items, company status, etc., may have changed. Please contact the companies to confirm details.