Home Things To Do Nightlife 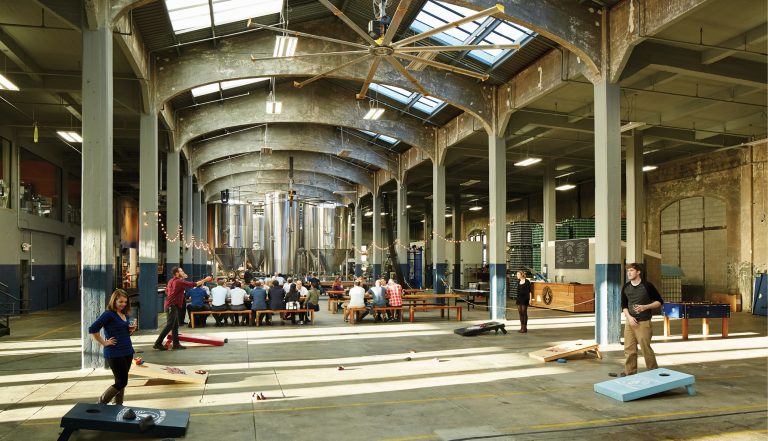 Cornhole Spot: Rhinegheist
The unofficial alcohol-friendly sport of Cincinnati, it was only a matter of time before local bars started featuring cornhole sets on site. Rhinegeist Brewery does it best, putting their 250,000-square-foot OTR space to good use and pairing the wooden boards and bean bags with their mighty popular house brews. There are usually multiple boards going at once, so you rarely have to wait long for a game, and keeping it indoors allows patrons to play year-round. One caveat: Please toss responsibly. 1910 Elm St., Over-the-Rhine, (513) 381-1367, rhinegeist.com

Rooftop Bar: Cocktail Terrace at 21C
 The idea of a rooftop bar brings with it a hoity-toity, let’s-be-like-Sex-and-the-City stigma. That’s what makes the relaxed atmosphere at 21c so refreshing. Sure, the terrace has the requisite oversized modern furniture and painted glass railings, but the tunes are laid-back and the cocktails are reasonably priced (not to mentioned cleverly named). Sip on a refreshing Cuke Skywalker (gin, lavender, cucumber, and lime) or a real Slim Shandy (Pilsner, grapefruit shrub, lemon) and take in panoramic views of the east side of town. 609 Walnut St., downtown, (513) 578-6600, 21ccocktailterrace.com

Bar With A View: Incline Public House
 A 1,400-square-foot deck offers a macro view of Cincinnati: its neighborhoods and downtown, industry and riverfront, hills and flats. Soak up some rays and a cold brew on a sunny afternoon, or sip a cocktail at dusk as the lights sparkle across the city. Even the farthest corner table indoors offers a panorama. 2601 W. Eighth St., Price Hill, (513) 251-3000, inclinepublichouse.com

Intimate Music Space: Symphony Hotel
 Nestled among the 1870s row houses that line Washington Park, the Symphony Hotel lounge on a weekend night recreates the urbane intimacy of Europe’s historic cities. In warm weather, the large doors behind the music stage are opened onto narrow 14th Street and the looming edifice of Music Hall. The lounge only holds about 50 seats and live acts are typically polished duets, such as Drew Lanius and Jay Aronoff, or Billy Larkin and Amy McFarland. The wine list is outstanding; the cozy audience becomes family. Excuse me, am I on the Left Bank? 210 W. 14th St., Over-the-Rhine, (513) 721-3353

Pinball Joint: Porter’s Pinball
The best use of quarters since you left college, but a more charming setting than your dorm room floor. Owner Brian Porter is a passionate pinball collector and historian who posts a little lore above each game, has a shelf full of pinball-related books, and offers plenty of cans of pop for sale. Porter, who had a stroke in 1998, has rigged all of his games (including Indiana Jones, Terminator 2, The Shadow, and a don’t-miss Playboy classic) so they can be played either right or left-handed. 1334 Main St., Over-the-Rhine, (513) 381-2136

Jimmy Buffett Experience: Ludlow Bromley Yacht Club
Looking for that frozen concoction that helps you hang on? Try LBYC. Just around the western bend in the Ohio, this floating bar and restaurant (with its own dock; welcome aboard, pirates!) offers a nautical-meets-tiki-bar decor that would make the Son of a Son of a Sailor feel right at home. Come Monday for the grill-your-own-steak night, or sample the ribs on Thursday. It’s the perfect place to tie off, kick back, and disappear. Hey, it’s 5 o’clock somewhere. 860 Elm St., Ludlow, (859) 291-8132, ludlowbromleyyachtclub.com

Bar Game (Darts): Hap’s Irish Pub
Hap’s isn’t big on pomp and circumstance. It’s a cash-only establishment that prides itself on strong whiskey, cheap beer, and televising as many European soccer games as possible. It also has the highest dartboard-to-square-footage ratio in the city. Stop by and join one of the weekend tournaments ($5, random teams) or throw a few games after work. The side room alone has three dartboards across a single wall, so invite as many friends as you like. Loser buys the shots. 3510 Erie Ave., East Hyde Park, (513) 871-6477

Hidden Art Gallery: Reed Gallery and Meyers Gallery at DAAP
We love our local museums, but for value and variety, you can’t beat the two free galleries on UC’s campus, where director Aaron Cowan curates shows that reflect all of DAAP’s disciplines (design, architecture, art, and planning). Both present student works in January; in February, see modern paintings by Cincinnati-born Joseph Marioni at the Reed, and an exhibit on Ladislas Segoe, the pioneering urban planner who worked on our 1925 city plan, at the Meyers. Reed Gallery, 2624 Clifton Ave. (Fifth Floor); Meyers Gallery, 2801 UC MainStreet, (513) 556-2839; Clifton, daap.uc.edu/galleries

Movie Deal: Omnimax Club Card
Whether you want to relive the films of your youth or introduce your kids to the wonder that is a five-story, 72-foot-wide, 180-degree screen—and the light-tunnel intro—it just got a lot cheaper to do so. As in $25 annually for adults and $20 for kids—for unlimited visits. See new films every four months like Island of Lemurs and Jerusalem, or go on weekends to catch classics like Shackleton’s Antarctic Adventure and Stormchasers. Added bonus: You get invited to special screenings of mystery films to help decide what plays next. 1301 Western Ave., Queensgate, (513) 287-7000, cincymuseum.org

The Edge Inn
The cheapest beer anywhere, a conversation-encouraging U-shaped bar, and a varied mix of customers: the gold standard. 3935 Edwards Rd., Oakley, (513) 841-9030

Bar to Hear Bands: Northside Tavern
The place is as expansive and diverse as Northside itself. Groups play every night, and there’s no cover charge. With a stage barely bigger than a Frisbee, it’s harder for the band to ignore you calling for them to play “Sister Christian,” and even when they do, you can always sing it yourself at the regular live-band karaoke the bar offers. Two rooms, two bars, and a courtyard out back for winter bonfires. Put your hands together. 4163 Hamilton Ave., Northside, (513) 542-3603, northsidetav.com/cincy