The average anterior crucial ligament of a young adult male (ages 20-35) is 1.33937 inches long, according to the one study I found that appeared to be written in English. 1.33937 inches of tendon, muscle fiber, and connective tissue is all that stands in the way of reducing a menacing hulk of a specimen to a hobbled, sorry human.

Last Thursday evening, under a warm South Florida night sky, the ACL of our beloved Geno Atkins was stricken from this world. It was a cruel twist of fate in a very little sense of the phrase, with Atkins right knee buckling under the pressure of an offensive lineman. When such tragedies befall our heroes, we look for someone to blame, someone to take our frustrations out on. But there is no one to blame here, Bengals fans. Not John Jerry, the Dolphins right guard that Geno was engaged with when it happened. Not Roger Goodell nor the league as a whole. Not even the ruthless football gods that struck down yet another recently extended Bengals star. Remember, my dear Bengals fans, blaming someone isn’t going to make Geno return to the field this season.

There are two ways to cope with the injury. You can wallow in pity and no one would blame you. The injury is made worse when viewed in the context of the season as a whole. Leon Hall, ace cornerback and the team’s second most important defensive player, is out for the year. Rey Maualuga, no matter your feelings about the quality of his play, was still a starting linebacker and is likely out until week 15 or 16. Just when the offense seemed to be clicking on all cylinders, the one indispensable defensive player goes down.

Or you could see this as an opportunity. Brandon Thompson, a promising defensive tackle who has shown flashes of dominance, now gets an opportunity to show what he has learned from studying Geno and prove he has the ability to take over for Domata Peko in a few years. Perhaps Andy Dalton and A.J. Green, who most certainly will have to score more points in the coming weeks than normal, will thrive with heightened expectations. Maybe Mike Zimmer can devise even more devious and creative blitz packages between cleaning his rifle in preparation for the upcoming hunting season.

And maybe, just maybe, this is the conflict, the obstacle that needs to be overcome in the story of Geno Atkins: Football Destroyer, a sweeping epic rivaled by only the works of Homer and Tolkien. Not only is Geno now faced with the reparation of his ACL, he now must conquer those that doubt he can return to his otherworldly self. It would fit his narrative perfectly. The undervalued college star is humbled by being a late-round draft pick, vows to seek vengeance on all that did not believe in him, develops into one of the game’s best defensive players, signs a record-breaking contract extension as his team prepares for a season in which they are expected to challenge for the division, conference, and even Super Bowl championship, yet is tragically injured during an unexpected play. I believe he will return and strike down upon thee with great vengeance and furious anger, those who attempt to destroy his ACLs. AND YOU WILL KNOW MY NAME IS GENO WHEN I LAY MY VENGEANCE UPON THEE (Link contains some bad words. But it’s Sam Jackson, so when he says them, they aren’t that bad.)

But for now, let us remember the happy times that we spent with Geno’s natual right anterior crucial ligament, all 1.33937 inches of it. 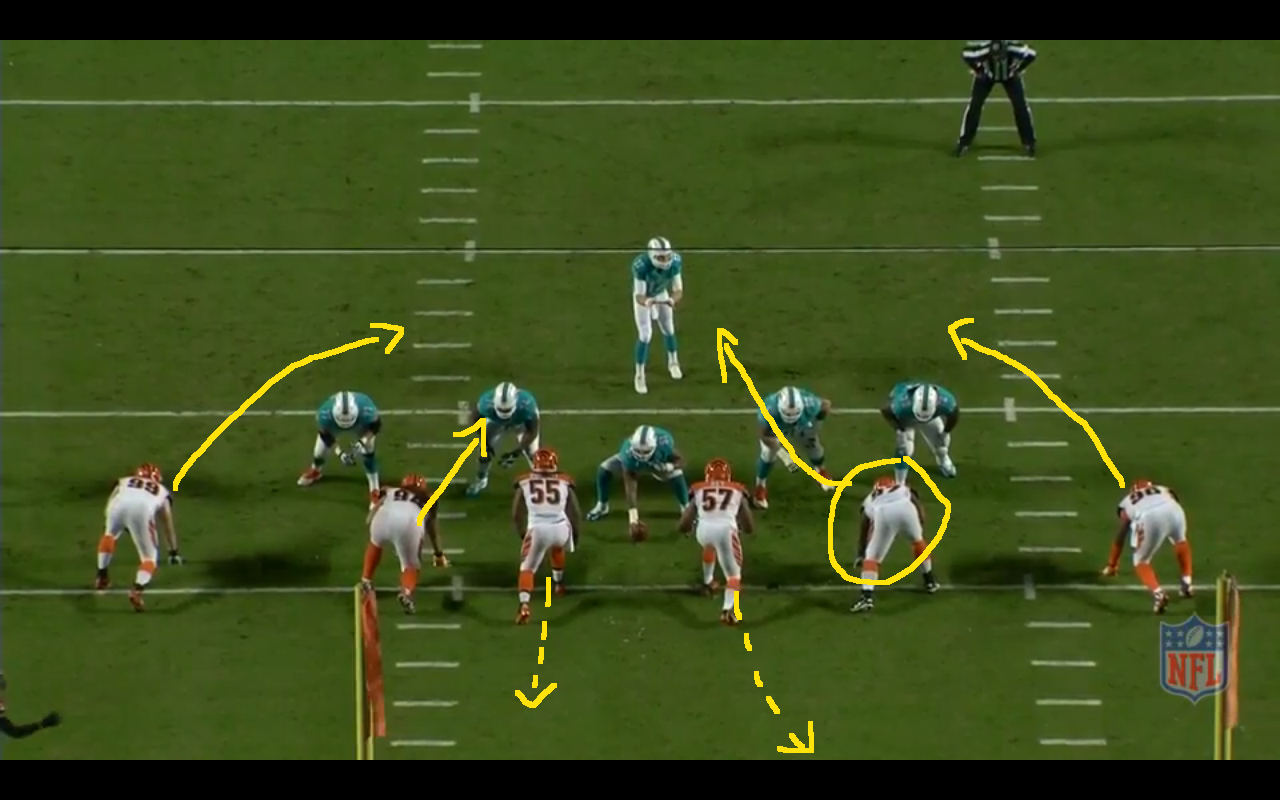 Look at that ACL. So young and full of life.

Here, Geno uses his leverage and power to drive guard Richie Incognito back into his quarterback. After recovering an Andy Dalton fumble, the Dolphins have the ball at the Cincinnati 21, looking for the game’s first touchdown. Geno does a great job of preventing a big play by throwing off Ryan Tannehill’s timing on the play. 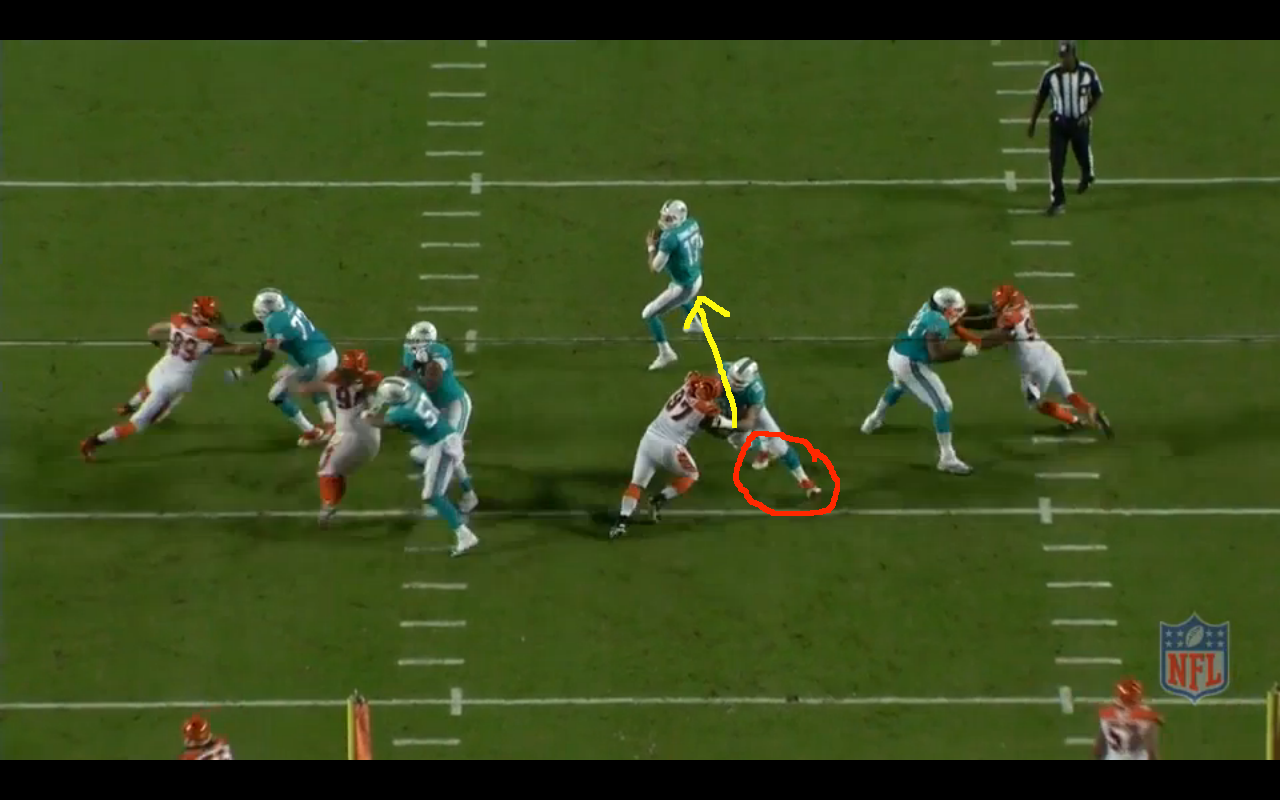 Take a look at Incognito’s feet on this play. (Hint: it’s going to be a bit of a theme.) You can see how off balance Incognito is by how far apart his feet are and how almost all his weight appears to be on his back foot. When Geno gets someone in this position, it’s over. You ever watch a good MMA fight where Joe Rogan talks about how susceptible fighter X is to an arm bar based on a certain position? Well that’s what this is like. Incognito has no shot of stopping Geno once he is in this position; his only hope is that Tannehill can get rid of the ball before Geno gets there.

Tannehill does end up getting the pass away, but he can’t step into the throw because he has over 600 pounds of man backing up into him. The throw, an ill-advised one that likely wouldn’t have been complete had he been able to throw it accurately, ends up sailing harmlessly out of bounds. The defense holds again on third down and the Bengals hold the Dolphins to just a field goal following the turnover. 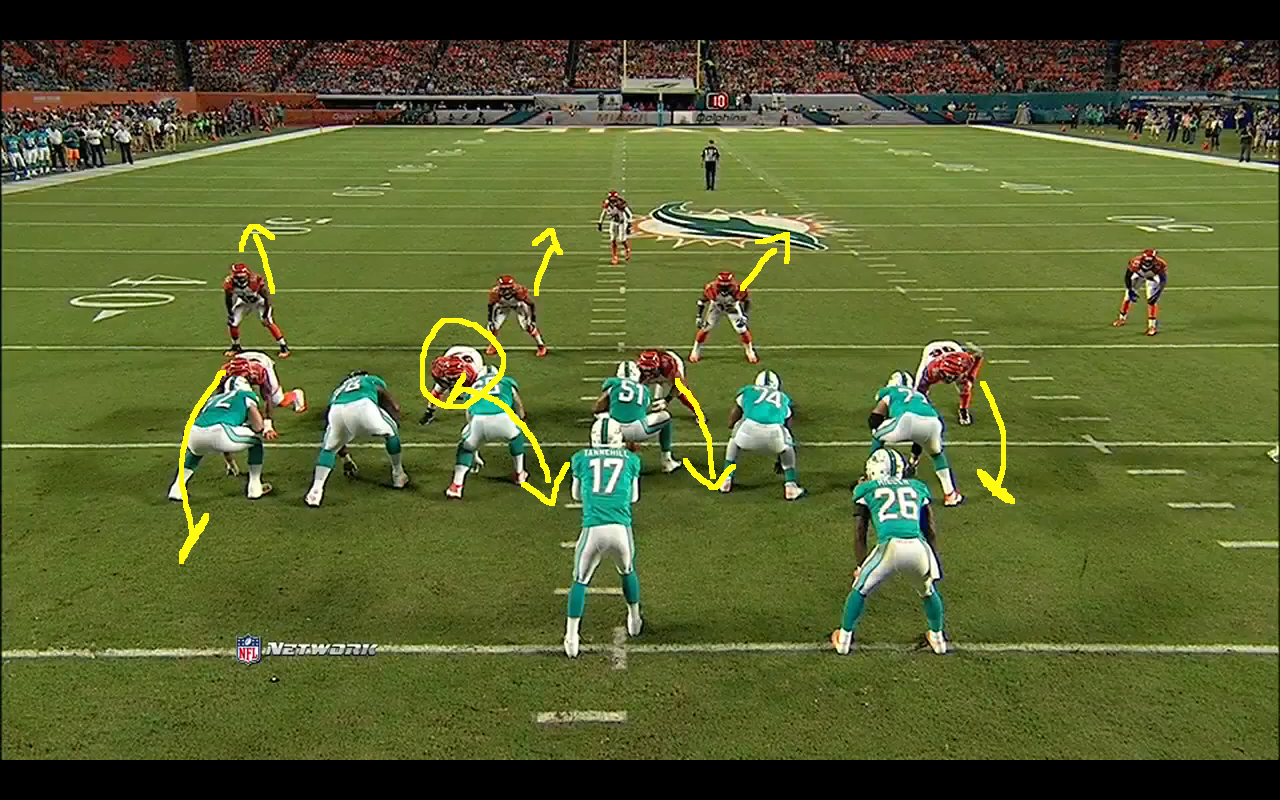 This is what we’re really going to miss from Geno and his dearly departed right ACL. The dominance. The quickness. The embarrassment. When he’s dominating like he does on this play, it’s a beautiful thing to watch.

Here he once again takes on Incognito, who has come under fire for his despicable bullying act aimed at teammate Jonathan Martin. Incognito has been called a lot of names this weekend, but for this play, the most accurate description of the guard would be simply slow. We saw how Geno’s quickness burned Incognito on the previous play… 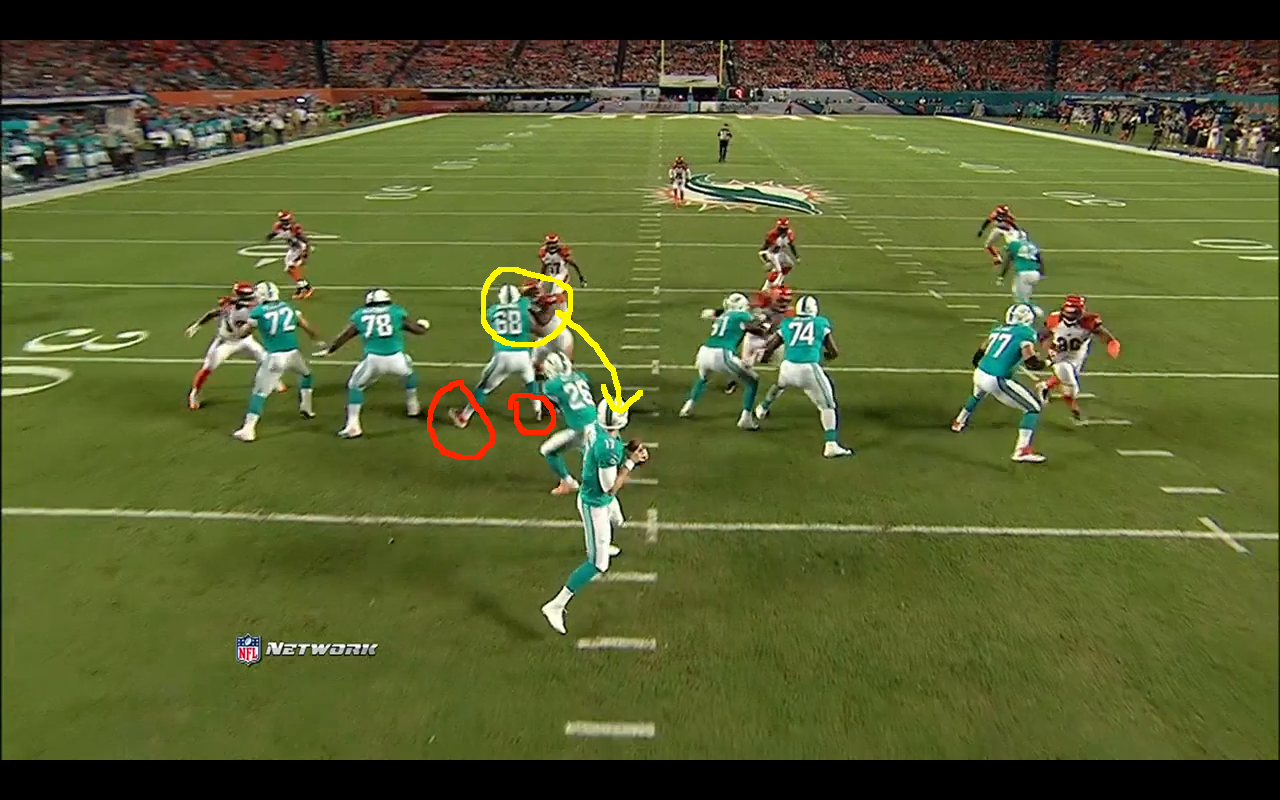 …and he does it again. Check out Incognito’s feet again. He’s essentially holding on to Geno to avoid falling down. Geno has him completely off-balance, making it easy to breeze past him for an easy sack. (It also helps that Lamar Miller decides to help against the defensive end who is actually in containment rather than a rush.) 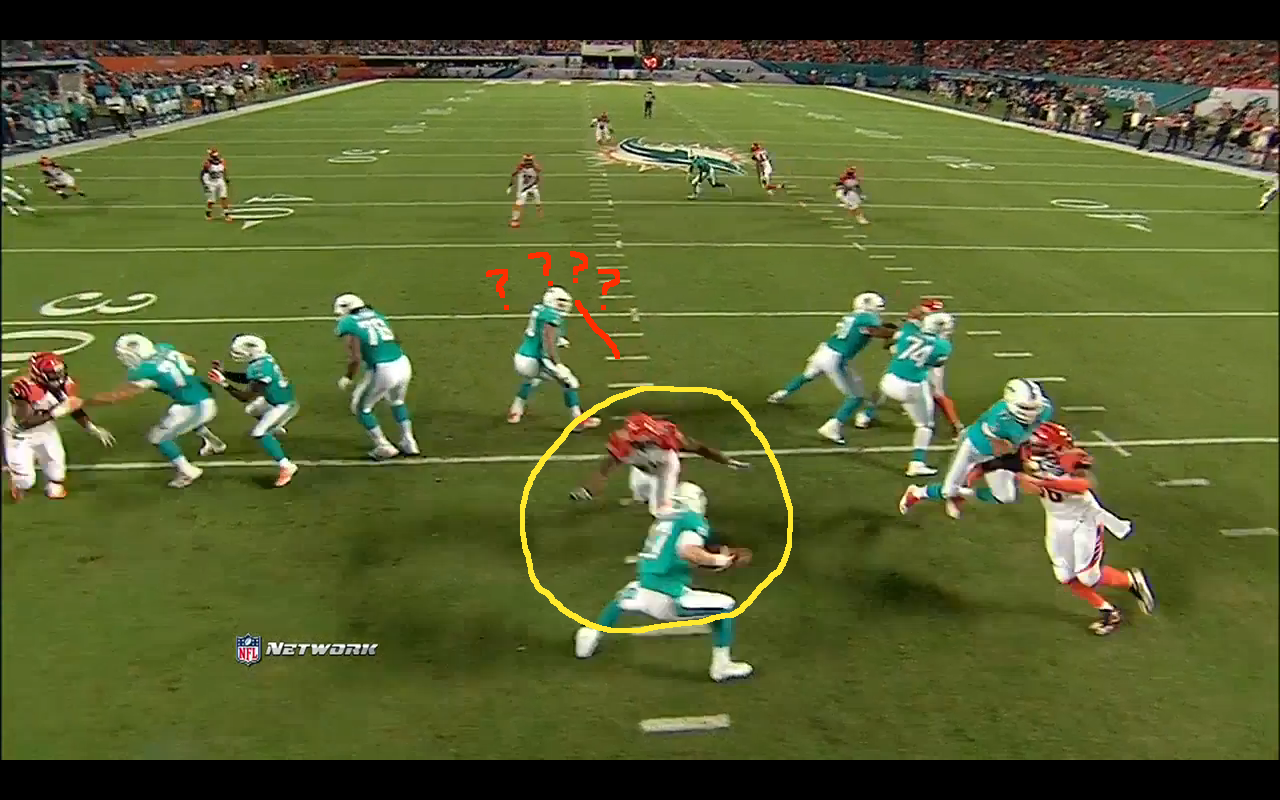 THAT’S how you bully someone, Incognito. Geno leaves him looking lost and confused and takes down Tannehill for his sixth and final sack of the season.

Over the last 15 weeks of Bengals football, I’ve been breaking down Geno’s exploits here. And even though he’s out for the year, his spirit must continue to live on. I’ll be using this space instead to show some good and/or bad things that stood out to me each week. Send suggestions on which players to break down to @adam_flango on Twitter.