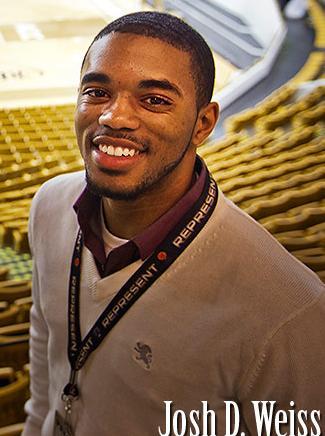 This past offseason, ESPN hired beat reporters to cover each team in the NFL for ESPN.com’s NFL Nation blog. That brought Coley Harvey to Cincinnati, joining the legion of Bengals reporters covering the team on a daily basis. A Northwestern University graduate and former college football beat reporter, Harvey started the ESPN gig just a few days before the team’s Week 1 game against Chicago. With a little more than half the season now under his Worldwide Leader belt (standard-issue to all ESPNers), I chatted with Harvey about Bobby Hebert, UDF, Jesse Jackson, and Domata Peko’s wardrobe.

So give us your background before landing the gig with ESPN.
I’m from Atlanta. After high school I ended up going to Northwestern for college, in Chicago, and while I was there I had a few internships—I covered the Braves for one summer as an intern with MLB.com, and then the next summer I was in San Francisco covering the Giants. Baseball, as far as the sports I actually played, that was my main sport growing up. Obviously I paid attention to football too, and being in Atlanta, I followed the Falcons, even when they weren’t very good. They had Deion Sanders at one point, so that was a highlight.

More so than Bobby Hebert?
Haha, yeah, more than Bobby Hebert. Way more than Chris Chandler. Jamal Anderson though, that was a great year, when they went to the Super Bowl in ’98. But that was few and far between. But I covered a lot of baseball in college, and then I interned for the Macon Telegraph in Macon, Georgia. And I was really fortunate when it was time to graduate college that they had an opportunity I could apply for, so I actually ended up back in Macon right after school. Wasn’t the easiest time to break into the journalism business, so I definitely think about that opportunity a lot and realize how blessed I am that it came open. But I stayed in Macon for about three-and-a-half years. When I first got there, there was an opportunity to cover Georgia Tech. So I covered Tech for four seasons, and then an opportunity opened up at the Orlando Sentinel to cover Florida State, and the last two seasons I was in Tallahassee covering them. I enjoyed that, but this opportunity [with the Bengals] opened up, and that’s how I ended up in Cincinnati.

What knowledge or opinions did you have about the Bengals before you got the job?
I’ll be honest, the Bengals, when I was a kid, those were some of the dark days. Carl Pickens, Boomer Esiason—I knew about what those guys meant to the city and the organization itself, understood what legacy those guys left. But I didn’t know too much about the rest of it. So it took some studying, and it still does. I’m still having to make sure that I’m going back and double-checking and triple-checking my historical facts more than anything. And even just talking with some of the fans, it’s been an opportunity to get to know the fanbase itself. Especially with how it’s been the last few years, pulling for this team that finally looks like it’s beginning to turn that corner.

You started the job during the week of the first game—what was it like coming in at that moment?
That whole month before I actually got here was a challenge because I was juggling both teams, getting to know the Bengals, finishing up the Seminoles, and then also looking for a place to move. So it was a little sudden and it was a challenge, and there were some sleepless nights there during August and September. But at this point I think the transition finally smoothed out. I’ve gotten into the flow a regular NFL week, because it is a different animal covering the NFL as opposed to college. I also think I’ve gotten into a good rhythm with Cincinnati. I finally know what “UDF” stands for.

What’s the biggest difference between covering an NFL team and a major college football program?
I think the biggest thing is the access. In college, coaches have so much of a say over when players can talk, what players can say, how they can say it. They have a much bigger impact on how their programs are constructed than I’m sure a lot of people realize. But when it comes to the NFL, players are getting paid millions of dollars. They’re able to say whatever they want. Of course you do have certain constraints, but for the most part, you have a lot more freedom to get things out of people. And the guys are not afraid to speak their mind if there is something they feel passionate about. I had a player the other day—we were talking about the bullying incident in Miami—and he was pretty open about how he felt. The fact that he was that bold and that open with what he was saying, you can tell you’re dealing with a different animal. In college, if a guy says that, he’s gonna get chewed out by the coach and you probably don’t get a chance to talk to him for the rest of the season. So it’s a different dynamic in that sense.

What’s the best press box food you’ve had so far this season?
That was actually Cleveland. Cleveland had a pretty strong spread. They had a really good halftime option as well. And it was healthy too.

And the best stadium?
I can’t lie, Paul Brown Stadium has a really nice view from the press box. You’re looking out, you can see the Suspension Bridge, you can see the big escalator in the corner of the stadium. And when you’re walking into the stadium you have that strong view of the skyline looking back at downtown. I’ve been really impressed with Paul Brown.

What about the players? Who among them has impressed you the most?
On the field—and I wrote about this early on—but Giovani Bernard continues to impress me. I had a chance to see him a lot when I was covering college sports there in ACC country while he was at North Carolina. He was electric then, too. He’s very quick, very shifty, makes plays seemingly whenever he wants. That touchdown run against the Dolphins was hands-down one of the best individual runs I’ve seen in the last few years. As far as in the locker room, you can’t go wrong with a guy like Andrew Whitworth. A veteran who has been around and seen a lot, he’s been in that locker room his whole career, so he’s the veteran you always turn to when you try to get that global perspective as far as what something means for the Cincinnati Bengals. This is actually a really good locker room overall. I think that this Bengals locker room may be the best in the NFL—definitely one of the best I’ve been around. You just have so many quality people that keep that locker room together, and I know a couple of years ago you couldn’t have necessarily said that. But now you have a really good group that goes out and works hard and wants to finally get this program over the hump.

Do you have a favorite locker room moment from this year?
Every Monday after film review, the Bengals have a Bible study for any players who want to participate, and sometimes they’ll bring in a speaker or whatever. And [this past Monday], Marvin Lewis brings in Reverend Jesse Jackson. When I was walking by, he stopped and shook my hand. So that was a fun moment just because it was totally random, totally unexpected. Another one, just because I’m a huge Walking Dead fan, was seeing Domata Peko after a game wearing a Walking Dead shirt, and we started talking about the show. It’s cool to have those connections. Especially for fans, it’s easy to forget that these guys are regular people, too. They’re not just the superstars that we write about and lionize and everything like that.

Give us your prediction on how the season will finish out.
I’m still thinking this team—even after a couple tough losses—I think they are gonna end up finishing 10-6, and I still think they will win the division. And you know, I’ve been having a feeling all season, this good feeling for the Bengals that they’re going to end up winning at least one playoff game this year. I’ve just had this feeling all season that this is a special year. I think with the injuries and inconsistency that Andy Dalton has shown these last couple weeks, it’s been a little bit tougher to see that. But I do believe this team will get it together.

Follow Coley (and send him random, ridiculous questions) on Twitter at @ColeyHarvey, and keep up with his coverage of the team on ESPN’s NFL Nation blog.