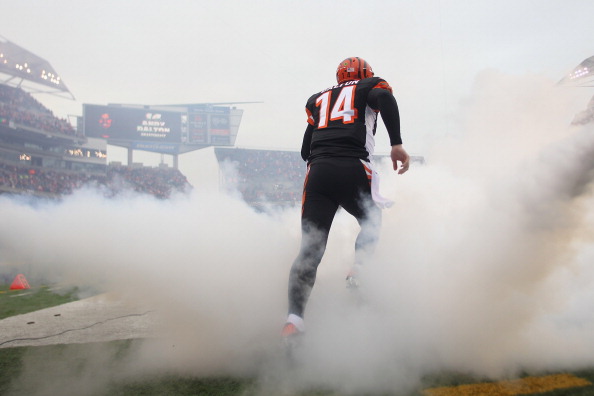 I’m not sure if y’all are aware of the website Spotrac.com, but it’s a very useful tool when looking at athlete contracts. If you fork over a little coin—and even if you don’t—you can get all sorts of detailed information about guaranteed money, previous contracts, average salary per position, etc. So as a better way to serve the fine readers of this blog, I forked over a little cash-ola for a deeper look into the contract world.

What the site didn’t disclose, however, is that it was prone to publishing pieces that would incite minor aneurysms in the brains of certain fan bases. Prepare yourselves, Cincinnati fans. Take a deep breath. Pop some Bayer aspirin. Maybe go on a retreat to one of those therapeutic spas in Lake Tahoe or Arizona or something.

On Thursday, the site published an approximate contract valuation for one Andy Dalton. They compared the quarterback to players the Bengals would much rather have under center and used their recent deals and performance to estimate how much money Andy Dalton would be owed after this season. (He is set to become a free agent in 2015.) The quarterbacks they use for comparison, by the way: Jay Cutler, Matt Ryan, Matthew Stafford and…Joe Flacco. Okay, maybe Bengals wouldn’t rather have the last guy, but we do live in a world where Flacco is the only one of those four to win a Super Bowl. (As always, football is stupid sometimes.)

I’ll save you the technical business and get to the meat of the piece. Spotrac predicted Andy Dalton’s next contract to be worth…$94,066,451!!!!!! THERE EXISTS A WORLD WHERE ANDY DALTON IS WORTH NEARLY $100,000,000. THAT’S SO MANY MILLIONS OF DOLLARS. IS ANDY DALTON THE YELLOW er RED KING?

Not that it matters a whole lot, but $31.8 million of that would be guaranteed based on Spotrac’s estimation. Either way, the idea of potentially giving Andy Dalton that much money is not in my realm of comprehension, and perhaps the Bengals feel the same way. In an interview with The Cincinnati Enquirer, owner Mike Brown was somewhat non-committal when asked if the team has made a decision about Dalton going forward. Said Brown, “We are going to try to get something done but I don’t know if we are going to be able to or not.”

I, however, have far too many thoughts that can’t accurately be conveyed in a string of all-caps sentences, so allow me to wrap my head around this in some seaside hut in Bali or something. I just can’t even.