Despite the Cincinnati Bengals AFC North-leading 8-3-1 record, inconsistency may best describe the 2014 season thus far. The secondary—except for George Iloka—has been exposed more than once and is a terrible tackling unit. The linebacker rotation is held together with athletic tape and Cortisone shots. A.J. Green and the receivers were a disaster in the Bengals shellacking of a loss to New England. The Colts physically/mentally/emotionally assaulted the offensive line. Mike Nugent’s inaccuracies forced a 37-37 tie with the Panthers. (Oh, don’t even get me started on Jermaine Gresham.) And Andy Dalton has a cold— much like the one Frank Sinatra had, except it reappears anytime the Bengals play at night, on a Monday or Thursday, in the playoffs, or in Tampa Bay.

That more or less leaves one man who’s been consistent the entire season, and he was brilliant again in Tampa. But first, a test: The Bengals would’ve suffered an embarrassing loss to the now 2-10 Tampa Bay Buccaneers if not for which of the following individuals?

A. Whichever Bucs player wasn’t supposed to be on the field for this play. 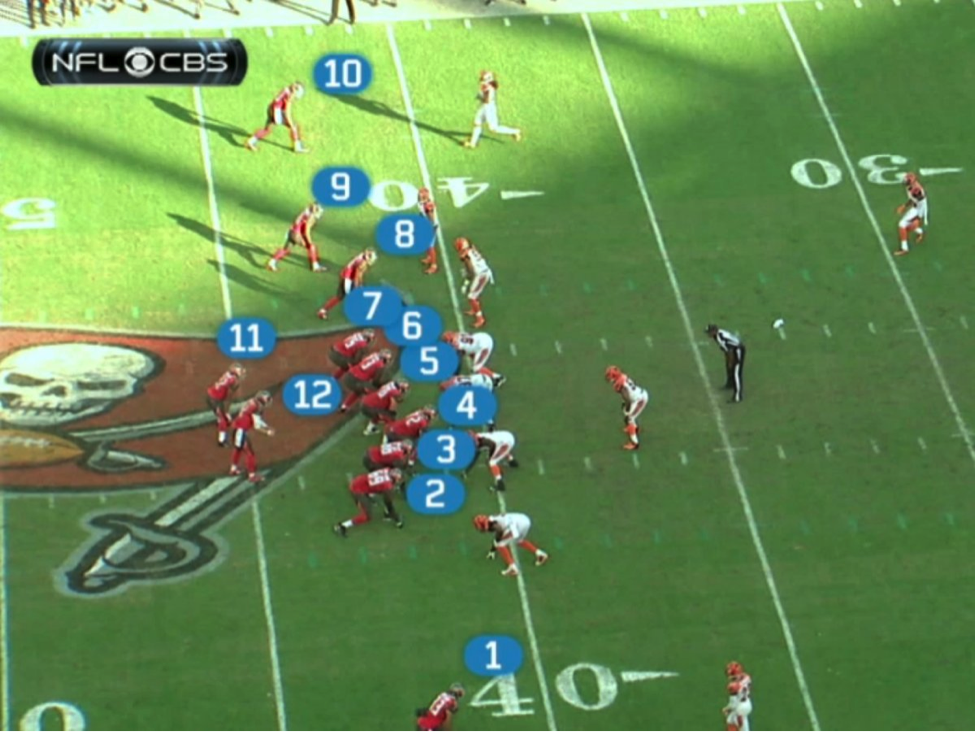 B. The Bengals trainer responsible for pulling the old “Bugs Bunny in Space Jam Secret Stuff Water Bottle Trick” in the third quarter on a flu-ridden Andy Dalton, who had thrown three interceptions in the first half.
C. Jason Licht, the Buccaneers General Manager responsible for assembling such a volatile mixture of players and personnel.
D. Bengals punter Kevin Huber.
E. All of the above, but Kevin Huber slightly more than the rest.

Clearly, the answer is E., as confirmed by a quick search of the Twitterverse on Sunday afternoon. 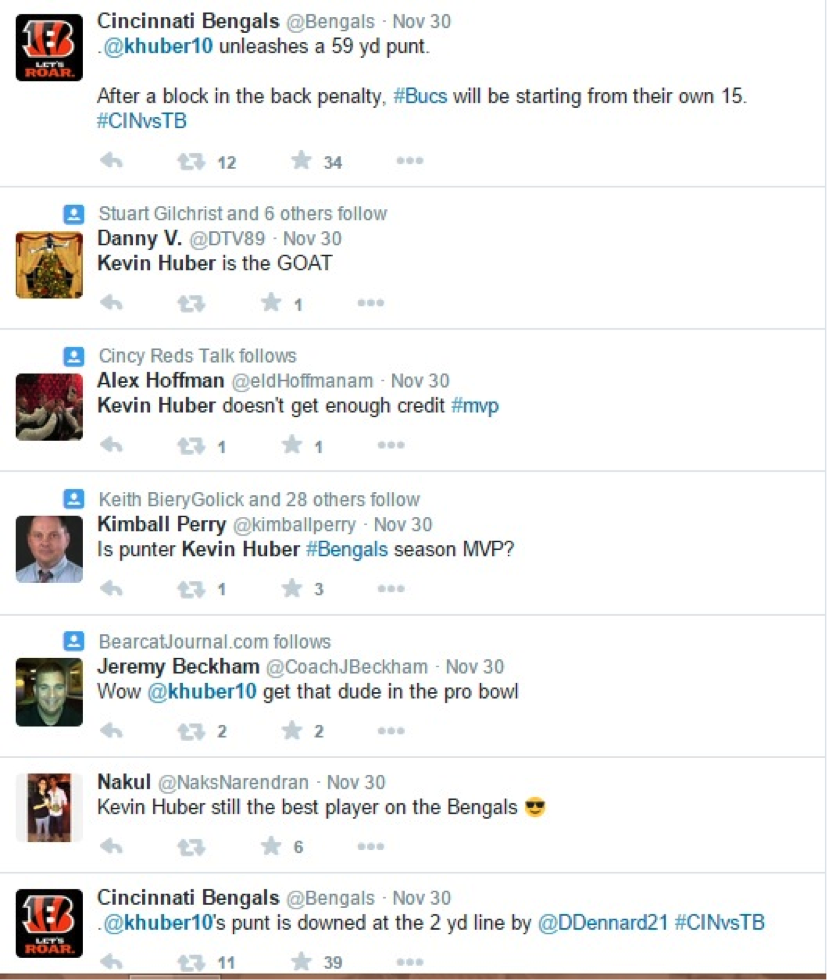 Huber has completed the transition from solid punter and hometown favorite known nationally for getting his jaw reconfigured by Pittsburgh’s Terence Garvin last season, into one of the best—if not the best—all-around punters in the league. And, as he displayed in Tampa Bay, he’s been more than consistent for the Bengals. He’s been a weapon and a lifeline.

In total, Huber punted six times Sunday, averaging 48 yards in the process. But his work in the second half was instrumental in the Bengals taking the lead and mercifully clinging to it. After a first-down sack of Dalton stalled the Bengals first drive of the second half at the Tampa Bay 39-yard line, Huber came on to make what was arguably the biggest play of the game. CBS Sports’ announcer Spero Dedes dropped this line on air, effectively deciding what I was writing about this week. “Kevin Huber, who’s had one of the great seasons we’ve seen from an NFL punter, maybe ever, on to boot it away, trying to pin it back inside the five.” Then Dedes paused briefly as the ball was downed at the 2-yard line, before adding, “And they will do just that.”

Huber’s punt negated the Bucs next drive, and, even after a 10-yard block-in-the-back penalty by Darqueze Dennard on Tampa Bay’s ensuing punt, the Bengals offense inherited a short field at the Tampa Bay 37-yard line. Special teams can win games because one punt can simultaneously eliminate an offensive drive for an opponent, while setting up an easy scoring drive for your own offense. That’s what Huber—who leads the NFL with 11 punts inside the opponent 10-yard line—brings to the table. With Dr. Andy Jekyll/Mr. Andy Hyde playing quarterback, easy scoring drives mean that much more to this current Bengals squad. Dalton connected with Green on for a 13-yard score 10 plays later, giving the Bengals a 14-10 lead that was somehow good enough for an eventual 14-13 victory. Huber’s day wasn’t done though.

The Buccaneers cut the Bengals lead to 14-13 with a field goal after Marvin Lewis’ inexplicable decision to attempt an onside kick after the Bengals took the lead. But the Bengals hung on for the win, in no small part because Huber flipped the field two more times in the fourth quarter, bailing out the Bengals’ offense after a slew of penalties and dropped passes led to just one first-down conversion in three fourth-quarter drives. Huber unleashed a 56-yarder from the Bengals 23-yard line with 12:22 remaining in the game, before drilling a 59-yarder from the Bengals 18-yard line, forcing the Buccaneers return team into an illegal block-in-the-back penalty and an eventual starting point at their own 15-yard line. On the Buccaneers trio of fourth-quarter drives, their best starting field position was their own 31-yard line.

But what’s to be made of Dede’s claim that Huber is in the midst of one of the “great seasons we’ve seen from an NFL punter, maybe ever?” Well, he’s not too far off. While none of Huber’s current stats are necessarily historic, he is having one of the most well-rounded punting seasons in recent history, and it’s almost impossible to argue that he isn’t the best punter in the NFL right now. Huber ranks in the top three of all four major punting statistics (yards per punt, net yards per punt, punts inside the 20, and punts inside the 10), while no other punter ranks in the top five of more than two.

Barring a complete drop off, it’s hard to fathom Huber not being an All-Pro at the end of the season. Until then, he’s likely to at least be one of the most valuable players on his hometown team. Hopefully for Bengals fans, that will be the case for many years to come.