With A.J. Green’s status for Sunday’s game declared as doubtful, it appears that Andy Dalton will be facing the Indianapolis Colts without his best receiver yet again. In the Bengals Week 7 27-0 loss against the Colts, Dalton had one of his worst performances of the year, second only to the infamous Thursday Night Game against the Browns. Dalton finished with only 126 passing yards, 3.32 yards per attempt, and a 7.9 QBR. This outcome wasn’t on Dalton as much, however. Aside from the worst performance of the year by the Bengals’ offensive line, the Bengals group of backup receivers couldn’t get open all game. Mohamed Sanu, Dane Sanzenbacher, Brandon Tate, and James Wright combined for only 74 receiving yards from 122 total routes.

Sanzenbacher and Wright will also miss this game, so it will be up to Sanu, Brandon Tate, and Greg Little to step up and make some plays downfield in the most important game of the year. Little and Tate have struggled to earn Dalton’s trust all year, combining for only 262 receiving yards. That means that the biggest burden is on Mohamed Sanu to make some game-changing plays, as he did in the first half of the year when Green was injured. However, in the last eight games, with Green as the focal point of the passing offense, Sanu has topped 23 receiving yards only once.

Sanu showed some major improvement as a deep threat this year, and unfortunately he is the Bengals’ best active deep threat with Green sidelined. Sanu recorded eight catches of at least 30 yards for the season after only two such catches in 2012 and 2013. However, you’d have to go back to the first half of the year to see Sanu making those deep catches.

In the first game against the Colts, Sanu made an incredible catch in traffic that counted for 25% of the Bengals passing yards. On 3rd & 4, Dalton saw that both safeties were within eight yards of the line of scrimmage, so he audibled to a deep go-route to Sanu. The Colts’ safeties switched out of this look at the last second, as they did all game, so that Sergio Brown had Cover-1 responsibilities when the ball was snapped. Sanu ran a simple go route on the Colts’ left cornerback Greg Toler. Sanu swipes Toler’s arms away at the line of scrimmage and doesn’t get much separation on Toler as he runs down the field. Dalton sees that Sergio Brown is now covering that side of the field, but launches the deep ball anyways. Sanu climbs the ladder and makes the catch over Toler as he is hit hard in the side by Brown. This pass is especially impressive considering Dalton was hit hard by Bjoern Werner as he threw the ball, and the throw landed in a window about one-square-foot wide. This play really was one of the most impressive offensive plays of the season, even though it was a meaningless one in the fourth quarter of a shutout loss.

In the next game, the Bengals again did not have Green on the field as they took on the Ravens. Sanu finished the game with five catches for 125 yards and another 27 rushing yards. Two of the catches were over 45 yards. You can read a breakdown and watch both huge plays in this post . One game later against the Jacksonville Jaguars, Green returned in a limited capacity. Again, Sanu made several important deep catches. In the second quarter, Sanu was lined up in the slot while Green was lined up on the outside as the X-receiver. The two run a combination route which momentarily freezes the deep safety. 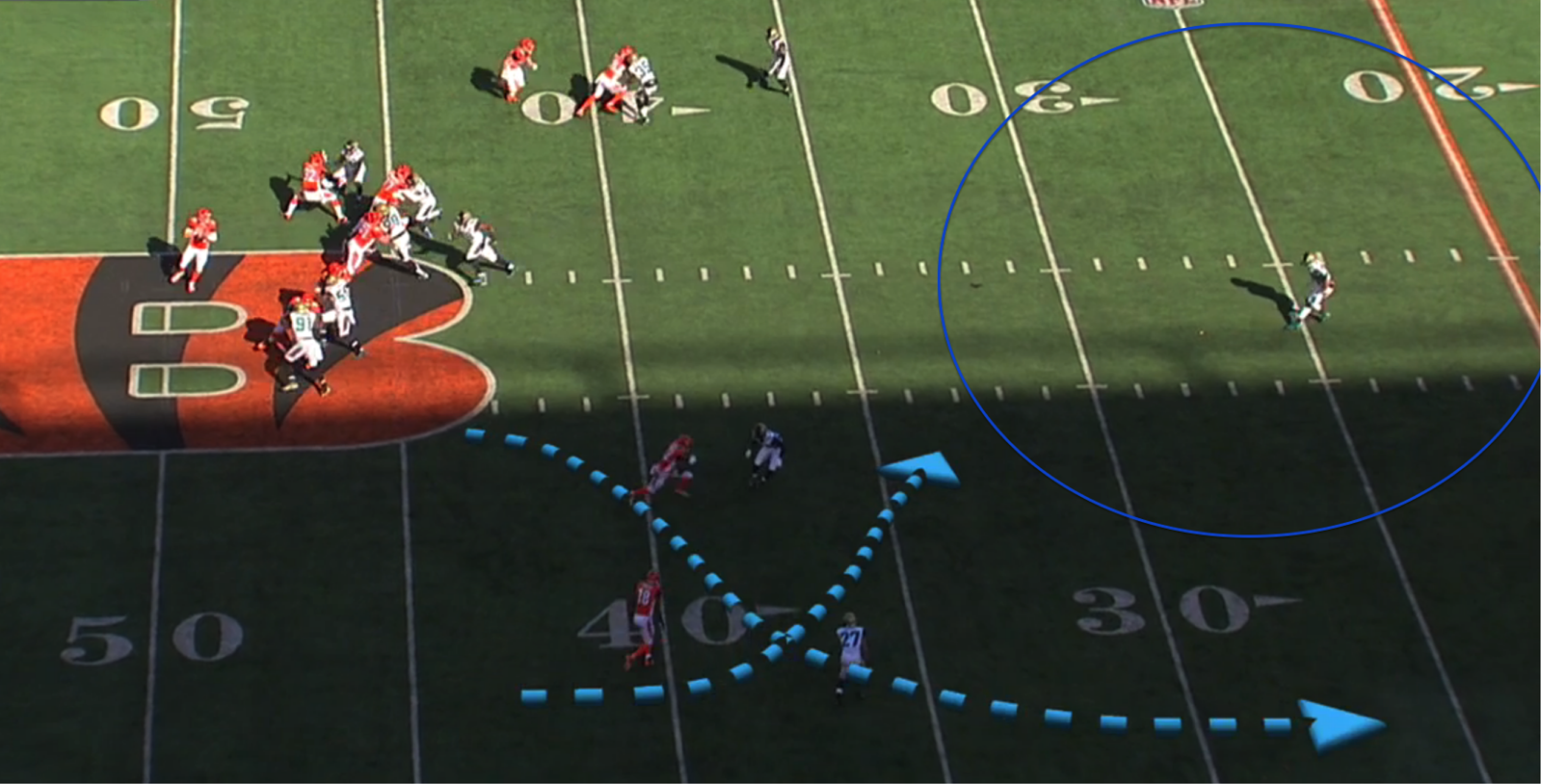 Dalton audibles to this deep shot when he sees the Jaguars in a Cover-1 look. The slot corner is giving Sanu five yards of cushion, so Sanu easily runs right by him. It’s just a simple go route with an outside release. The most impressive part of this play is Sanu’s adjustment to the ball. Dalton throws the ball to Sanu’s outside shoulder to avoid the safety, but the ball drifts to the right more than it should have. Sanu is looking straight up as he tracks the ball over his right shoulder, making an impressive Willie-Mays-style catch for a 33-yard gain.

In the third quarter of the same game, Sanu lines up in a bunch formation with A.J. Green right behind him. The Jaguars drop into a zone coverage, which means Sanu will be running down the field against a linebacker. 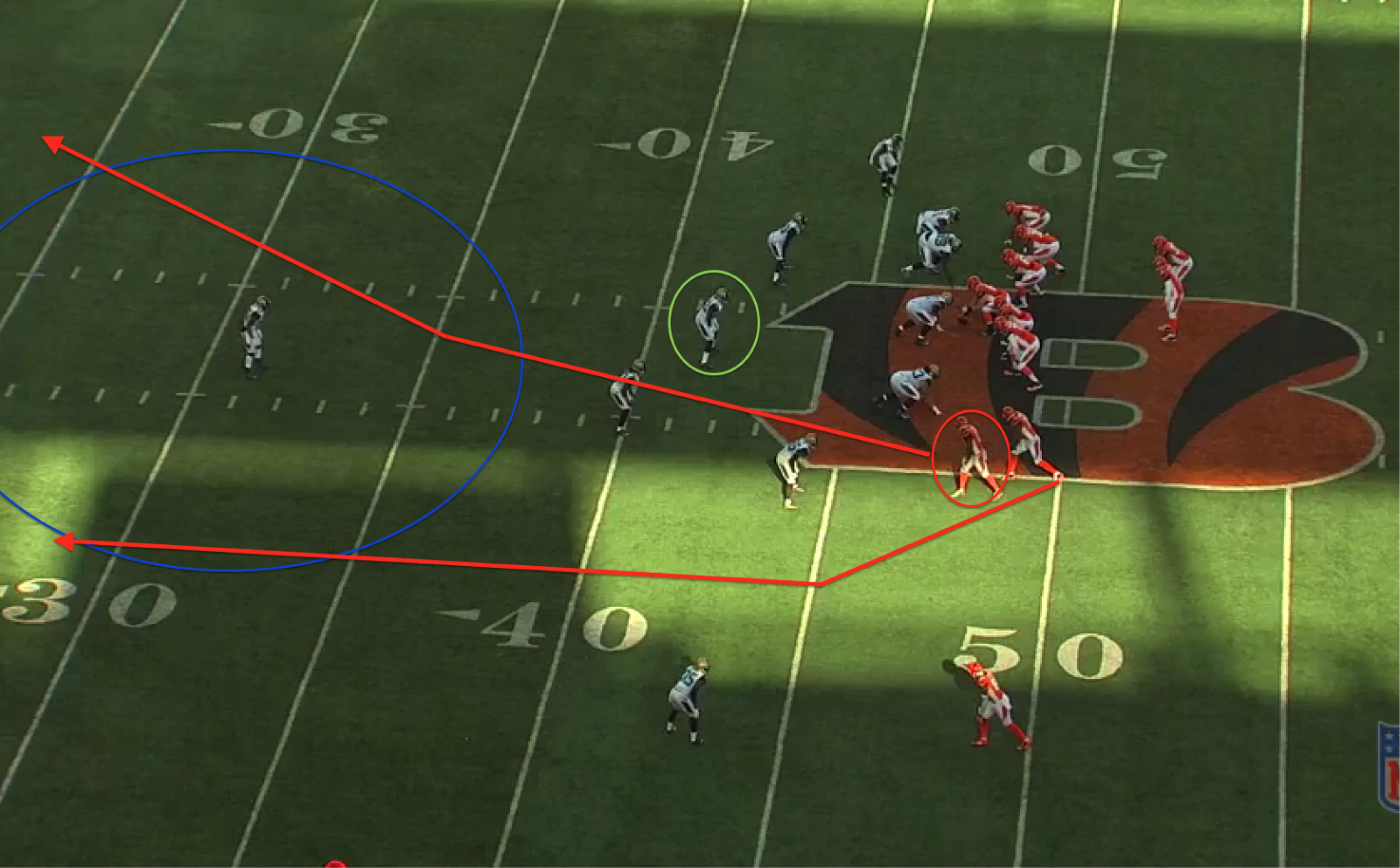 The linebacker obviously doesn’t keep up, while the deep safety breaks on the throw just a fraction of a second too late. Dalton’s throw drops perfectly into Sanu’s arms just before the safety hits Sanu.

Sanu must be able to get open downfield and make these type of splash plays when the Bengals face the Colts in Indianapolis on Sunday. In Week 7, the Colts corners pressed the Bengals receivers while the safeties didn’t respect the deep ball at all, often stacking the box against the run. Dalton must be able to land one of these deep shots to Sanu to keep the Colts secondary honest. This should give the Bengals passing attack more confidence and have a ripple effect on the running attack if the Colts secondary drops into more conservative Cover-2 looks.

There is a small chance that Green (concussion) plays in this game, but he hasn’t had much chemistry with Dalton lately anyway. If the Bengals are going to win their first playoff game since 1990, Mohamed Sanu needs to be the deep threat that he was in the first half of the 2014 season.