Home Culture The Yugos Return with a New Album 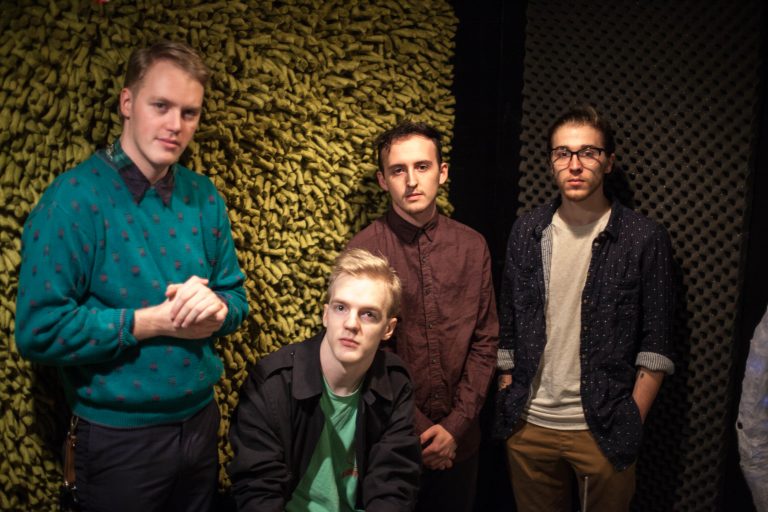 It’s coming up on four years since Cincinnati indie-pop band the Yugos released an album, a run that will mercifully come to an end this weekend. The group’s third studio record, Weighing the Heart, won’t get an official release until March 10, but there will be copies on sale at the album release show at Woodward Theater this Friday, January 27.

At one point scrapped and re-recorded, Weighing the Heart is a welcome continuation and evolution of the Yugos modernist new wave form. The four-piece Northern Kentucky outfit has long been likened—for good reason—to the Cure and New Order, influences immediately obvious in the kinetic build-up of the six-and-a-half-minute opening track “Glimpse of Life,” cresting with the charming and curiously British-tinged vocals of Christian Gough earnestly proclaiming, “Hold me tight / I don’t wanna die / But my head hurts so bad I think I might.” The energy of the Yugos’ familiar, throwback vibe has made them one of the more magnetic live performances in the local scene the past few years, and it translates well to the new album. “Steve French,” which CityBeat debuted last week, channels “Debaser” by the Pixies, and “Andopolis” feels like a long-lost Talking Heads track.

The record slows down, sonically, as it nears the end, perhaps a mark of the personal and collective maturation the members sorted through since the last album and the candid conversations that accompanied that process. It culminates with the wistful “Goodbye,” another six-and-half-minute track with lines like “There’s no blue skies in our friendship” and “I will always love you for the summer,” yet one that still manages to feel optimistic.

Weighing the Heart more than fills the Yugos-sized hole in our collective local playlist, and was well worth the wait—though Friday is long enough. Hold out for that extra month-and-a-half at your own peril.

The Yugos play Woodward Theater on Jan. 27 with Modern Aquatic, Sylmar, and This Pine Box.