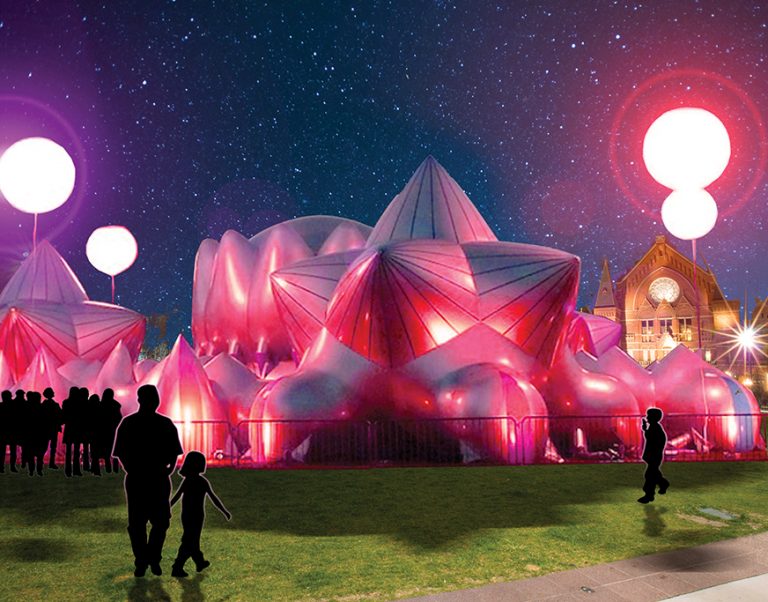 During three weeks from late May to early June, 2.33 million people descended upon Sydney, Australia, for the most recent installment of Vivid Sydney, an annual citywide projection-mapping meets South-by-Southwest light, music, and idea festival. The event, founded in 2009, is what inspired Haile Foundation president and CEO Tim Maloney to conceive of the initial Lumenocity in 2013 as a celebration for the Cincinnati Symphony Orchestra. “And the result just kind of blew the whole community away,” he recalls.

Ambitious and expensive, the intended one-time event blossomed into Cincinnati’s own postage-stamp version of an annual projection-mapping extravaganza, packing Washington Park to the hilt. It was an unqualified success; Maloney took it as a challenge to think bigger. “The experience was great, but it was time to move on to something else.”

Still bullish on the projection-mapping art form, Maloney began jetting off to Vivid and other large-scale, light-focused art events in places like London and Berlin with a small cadre of local creatives. It included Dan Reynolds and Steve McGowan, cofounders of Brave Berlin media production and design firm, who helmed the projection mapping for Lumenocity. Similarly invigorated-yet-unfulfilled by the show’s ardent response, they had been stoking Maloney’s widescreen aspirations. “When we came back from all of those other cities, we were always confident that we had the bench strength, the creativity here in Cincinnati to do something on that scale,” says McGowan. “We have beautiful architecture, we’re a walkable city, we have the streetcar. It reaffirmed we were on to something big.”

That something became BLINK, a four-day light and street-art event October 12–15 that will stretch from The Banks to Findlay Market. In the midst of the globe-spanning light-show research, Andrew Salzbrun, managing partner at AGAR branding agency, another Lumenocity partner, had pitched Maloney on a street art festival that would bring in international artists to commission original murals. Maloney decided to combine both concepts: 20 city blocks, featuring 22 projection-mapping locations—including the National Underground Railroad Freedom Center, Contemporary Arts Center, and Hamilton County Court House—and 20 new street-art murals near Findlay Market. The partners also teamed with ArtWorks to curate various light-based and sculptural displays throughout the event’s four designated zones, and host interactive inflatable structures on the Washington Park lawn. “This thing has gotten really massive for all the right reasons,” says McGowan. “There’s so much enthusiasm.”

All told, it’s a $3 million endeavor, which is why the agencies involved did their homework, securing the blessings of the mayor, city manager, and every major stakeholder before presenting to potential sponsors. They also wanted it to be diverse and inclusive, enlisting contributions from fellow artists, designers, and organizations in town—3CDC, Lightborne, Foster & Flux, We Have Become Vikings, Tommyink—and making the entire event free and open to the public. The hope is to attract half a million visitors over the four nights, and the potential economic impact for shops, restaurants, and hotels is massive. “We’re hoping the city’s natural attractions will be really active during the day, and then the show will go live each night,” says Reynolds.

Still, the motivation behind BLINK was never about a bottom line. There are plenty of less ambitious (and costly) ways to pack coffee shops and streetcars. “BLINK is a gift to our city,” says Salzbrun. “It’s an opportunity for our community to look forward to what we want our future city to be. That’s why this event matters. It’s going to put us on a global map with some of the world’s greatest artistic cities.”

To a seasoned Cincinnati ear, this rhetoric likely registers somewhere between delusion and hyperbole. Maloney and Co. are well aware of this—they’ve been spouting it for years. They also realize that it keeps getting louder. And if BLINK pays off in the way they envision, it could drown out every last bit of skepticism.

“This leadership team already feels like we are a city that’s ready for this,” says Reynolds. “Someone has to put a stake in the ground and say that Cincinnati is ready to host an event of this size. We felt like it was the right time.”