Home Things To Do Your Guide to Bockfest 2022

Throngs of people dressed as monks. Bock beer flowing like water. Goats pulling kegs (and doing yoga). These and other strange sightings can only mean one thing: Spring is upon us, and Bockfest has returned to herald its arrival.

Now in its 30th year, Cincinnati’s wonderfully weird festival takes over OTR this weekend with merrymaking, odd traditions, and that hardy, high-proof brew enjoyed by revelers at its eponymous fest. Legend holds that the name came from an epic bock drinking contest between two monks. One competitor fell over, likely due to the beer’s higher alcohol content, and blamed his slip on a pesky goat that wandered into the tavern. His opponent replied that the only goat around was in the beer they drank. However, it’s more widely accepted that the name and origin derive from the German city of Einbeck—which in a Bavarian accent sounds like “ein bock,” similar to the old German for “billy goat.” We think the legend makes for a much better drinking story. 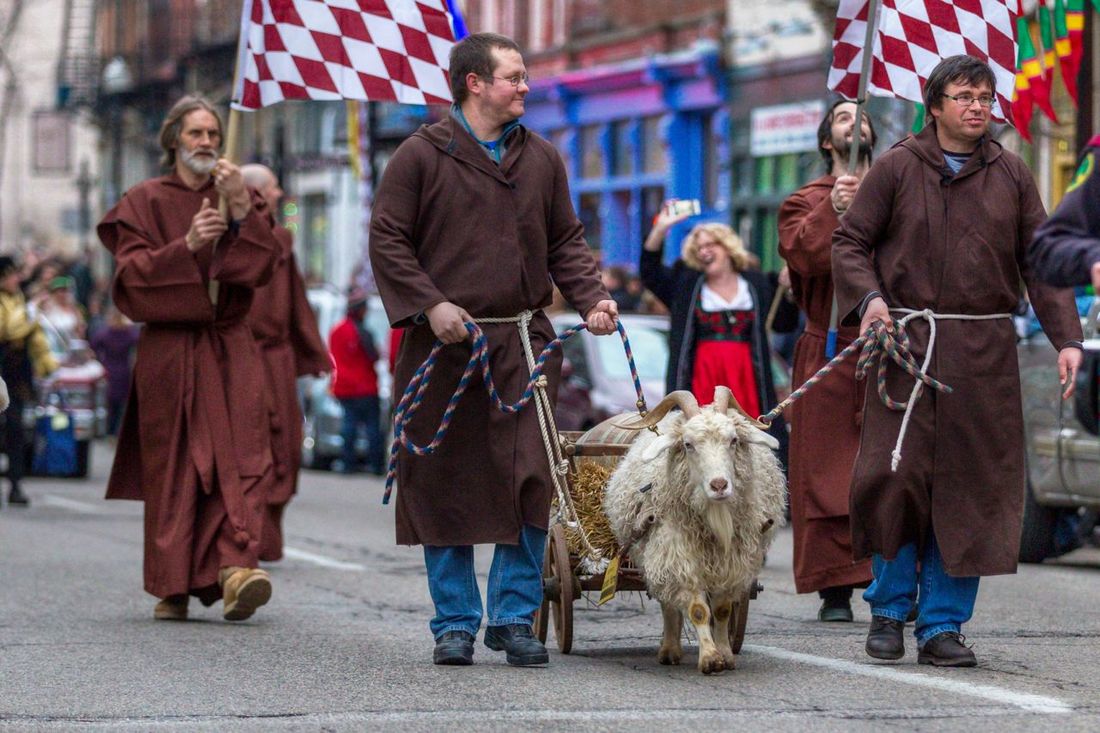 Don your cloak, grab your pet goat, and check out our rundown of the bock-analia to come this weekend.

Tapping of the Bocks

The weekend festivities kick off early at Arnold’s with the Tapping of the Bocks, the ceremonious opening of 17 different beers at once. Franciscan monk Brother Tim will be on hand to bless the booze, and River City Roustabout performs at 6 p.m. Find the full list of beers to be tapped here.

Bockfest starts with a happy hour at Moerlein featuring a slew of bock beer, followed by the Homebrew Competition Brewers Award ceremony. Stick around for a hearty Bockfest dinner: you can grab a bockwurst sandwich with apple dijon slaw, fried potatoes, and spicy mustard, or get the two-sausage Bockwurst Platter served with German potatoes, house-made whole grain spicy mustard demi, and apple bacon sauerkraut.

Past fests have been held at the now-closed Christian Moerlein MaltHouse, but the party goes on at Findlay Playground under a mammoth tent (conveniently located behind Cincinnati Magazine’s new HQ). Enjoy the food, bock beer, and live music from the Zinzinnati Bier Band and The Klaberheads. Parade awards and the Blessing of the Bock Beer start at 7:30.

Run (or, depending on how hungover you are, walk) past OTR’s historic brewing sites during this Saturday race. You’ll start and finish at Bockfest Hall, where a cold beer is sure to be waiting for you. Proceeds from the 5K, which is part of the TQL Beer Series, support the Brewery District and the Brewing Heritage Trail. Find out how to register here.

Saturday, 10 am, starts and ends at Bockfest Hall at Findlay Playground

Head to Rookwood Pottery, around the corner from Bockfest Hall, to learn about beer heritage from local historians and browse “breweriana” vendors offering beer signs, cans, steins, and more. Plus, you can take an Instagram-worthy picture next to the fest’s giant Trojan goat.

More than 30 bock beers will be flowing at this year’s Bockfest, and you can sample them all during Saturday’s Bock Beer Experience. One $45 ticket includes 4 oz samples of all bock beers on draft at Bockfest and a commemorative pint glass.

Immerse yourself in Cincinnati’s rich brewing history on afternoon tours of Hudepohl’s bottling facility and cellars, which have been closed to the public for many years. These exclusive tours are located around the corner from Bockfest Hall and are only available this weekend through the Brewing Heritage Trail.

Live Music at Bockfest Hall and The Billygoat Ball

Book it to Bockfest Hall for live music from Just Add Beer, The Turkey’s Duo, and My Brothers Keeper. Laginappe headlines the Billygoat Ball, which also features food, beer, and the culmination of the Sausage Queen competition at 9:30 p.m. The winner gets the honor of carrying the symbolic tray of Bockwurst sausage at next year’s parade.

Sunday is the best time to bring the kids out to experience Bockfest. The Little Links Pageant invites kids to dress in their “Welcome Spring” attire, whether that’s German lederhosen, goat costumes, monk outfits, and anything else celebrating the spirit of the festival. Pre-registration is required. The kids can enjoy the Good Green Earth Farm petting zoo at Bockfest Hall from 11 to 2 and free kids’ games from the Cincinnati Recreation Commission from 11 to 4, while the adults refresh their senses with a Bockfest Bloody Mary. Tickets for Goat Yoga at 10 a.m. Sunday have already sold out, but you can join the waiting list here. Don’t miss live performances by the Donauschwaben Dancers and The Hot Magnolias.

How far is 0.05 kilometers, exactly? It’s a 50-meter dash, or about 164 feet. Any way you measure it, athletes who complete this Sunday fun run will receive a limited-edition T-shirt, a medal that doubles as a beer opener, and a frosty beer to help you cool off.