Since 1990, Chuck Cleaver has made six records with Ass Ponys and seven records with Wussy. He turned 60 in June. But it’s only now, in 2019, that the longtime Cincinnati bandleader and songwriter will be eligible for a “Best New Artist” Grammy award.

That’s because of Send Aid, which is Cleaver’s first-ever solo record. (Spoiler alert: He won’t be nominated for a Grammy.) It came about at the encouragement/insistence of Cleaver’s label, Shake It, and also because it was an otherwise quiet year for Cleaver.

Although it’s only been 15 months since the Wussy’s last record, (2018’s What Heaven Is Like), the band has been on a bit of a hiatus, with limited touring in particular, due to a combination of family and day-job obligations, as well as Cleaver being diagnosed with spinal stenosis, a painful chronic back condition.

Send Aid (right) is not the sound of an artist freed from the shackles of his usual band, doing something he could never do—Cleaver’s songwriting voice is too distinctive for that. Whether it’s a sylvan, minimalist Ass Ponys song or a fuzzed-out Wussy rocker, he always leaves his stamp. But going solo still meant something different—a direct, lo-fi, almost demo-ish set of story-songs that are equal parts folky and experimental. “Somewhere between John Prine and Big Stick,” Cleaver says in the record’s press release, to which I’d add the New Zealand label Xpressway (this could easily be a cassette release) and Ass Ponys’ unpredictable still-at-it peers The Wolverton Brothers. Released on vinyl and streaming services July 19, it also finally hits the stores on compact disc (yes, they still exist!) this week.

Cleaver and his Wussy bandmates Lisa Walker and Mark Messerly recently wrapped up a short East Coast/Ohio tour that was a mixed bag of song-circle solo performances, storytelling, and collaborations. It’s a configuration Wussy may well tour in often going forward (along with Cleaver and Walker’s usual Wussy Duo). But the band itself is certainly not stopping. “I think the break has kind of—I can’t really say it’s revitalized Wussy, but the writing has somehow shifted again,” Cleaver says. “The stuff we’ve been doing in practice as a full band is pretty refreshing.” Cleaver spoke to Cincinnati Magazine about Send Aid, his back condition, Wussy, his love of collaboration, and how songwriting is not the same as memoir.

Is it basically true that Shake It broke down your resistance to the idea of a solo record?
I was being encouraged, by Billy Carter specifically, and Darren [Blase] to a certain extent. Once in a while, they’d be like, ‘When are you gonna make a solo record?’ And I was always like, ‘I don’t think about that. I like playing in a band.’

I wasn’t even gonna do it under my own name. I was going to make up a name. But Billy and Darren were both like, ‘You pussy, do it under your own name.’ I’m still not convinced it was the right thing to do.

Can you articulate why these songs weren’t for Wussy?
Some were written for Wussy at the time, then just didn’t fit the particular album that we were working on. But that’s only about half of them. The other half I wrote for this record, or had set aside.

I’m very fortunate. The people in the band are very truthful, and very good editors. They will basically call me on things, and John Hoffman will too. He’ll be like, ‘Eh, you know, that one’s not very good.’ And I write so much that it doesn’t matter. I’ve probably got 40 or 50 new songs. Certainly not all of them are good. They never are. But there are a few good ones in there. I can tell.

You’ve had a lot of time to write, and time away from Wussy, in part because you’ve been suffering from spinal stenosis. Was this rock’n’roll-induced or from your other work?
A little bit of everything. I broke my back when I was 19, in a car wreck. And then, a lot of people thought I was pretty stupid, but in my early to mid-30s, I took on stonemasonry, which is a really heavy job. I did that for 16, 17 years. It finally just got to the point where I was really having a lot of trouble at work, and I went to a chiropractor, and he basically said, ‘If you don’t quit being a stonemason, you’re not going to be walking by the time you’re 60.’ That was about five or six years ago. I just turned 60 and I’m still walking, so I must be doing something right. But it’s inevitable that I’m going to have to get an operation at some point.

My dad was always pretty clear with me that getting old blows. My parents were in their 40s when they had me. When you have parents that are grandparents age, you hear about death a little more when you’re young. So I’ve always kind of had this harbinger of doom floating over me.

Which explains a lot about your songs.
Oh yeah! My worldview is very much crafted by that, and where I come from. There’s hope, but it’s hiding behind things.

So how long did the record take?
Send Aid took three days, hours-wise. We didn’t do it in three consecutive days, but, y’know, an hour here, two hours there. We did it in a basement studio of John Hoffman’s. All the vocals were first or second takes, and most of the music, or at least my part of the music, were first takes. I played most of the instruments. Most of the tracks were recorded to a drum machine, and then real drummers came in on some things. And then guests and stuff.

It was pretty easy. It was pretty weird. I don’t know that I enjoyed it as much as I enjoy making a band record, because I enjoy the camaraderie, and I enjoy people who come in with ideas, things that I wasn’t even thinking of.

But including Hoffman, you still managed to get members of Lung, Vacation, Dawg Yawp, Swim Team, Notches, and Mardou on this record. I can’t think of many artists who are drawn to younger collaborators as much as you are.
I don’t know that that’s necessarily on purpose. If there were older folks that thought like me, I guess I would [work with them]. I don’t know. I’ve never thought much about that. I’m still interested in new stuff. I find sometimes that people my age have kinda quit that.
I mean, it’s not like I wouldn’t work with somebody that was into Joe Bonamassa or something. But most likely not. I mean, nothing against the dude—I know the guy’s a virtuoso or whatever. But I’m more interested in newer stuff, and for lack of another word, indie stuff. Home projects. There’s a certain type of creativity that I enjoy. One of my favorite bands ever is Big Stick, and almost nobody likes them. I really like a lot of New Zealand bands. I just like that sound, and younger people tend to make that sound more than old folks.

Some people just get comfortable, especially if they’ve had a certain amount of success. That’s not you.
Not at all! I don’t want to get comfortable. I want to keep challenging myself, and keep working. I’ve always kind of been in it for the words and the noise, but also just the immediacy of it. To me, the best parts of our songs have been the ones that are a bit more immediate and not worked on as much.

Like one of my favorite Wussy songs is “Little Miami.” And that’s a first take, where we didn’t know what we were doing, because we didn’t even have a song. We were just messing around. And then Lisa put words to it and all of a sudden it’s a song. That’s my favorite kind of stuff.

“Teenage Wasteland” was more or less that way too. I started playing that vibrato thing, just messing around in practice. And I quit, and Lisa was like, ‘Hey, keep doing that.’ Some people consider “Teenage Wasteland” to be their favorite Wussy song. It came about almost totally by accident.

Several songs on Send Aid clock in at under two minutes, and the whole record is no more than 30 minutes. Did being solo make the songs even shorter than usual?
Probably, yeah. When I make up songs, that’s kind of how they tend to be. And then a lot of times the band will flesh them out. Make up a middle eight or whatever. But when I write ’em on my own it’s like, yeah, get in and get out. For somebody who likes words, I don’t like more than two or three verses. Get it said. Be as compact as you can to get your point across. If you even have a point. Sometimes I write words together just because they sound interesting, which disappoints the hell out of people. Back in the Ass Ponys days, I wrote a song called “Hagged,” and the only reason I wrote that song was to get the phrase bolt upright into a song. When I tell them that, people [looking for more meaning in the lyrics] are like, ‘Goddammit!’ Heck yeah, whatever. It’s an exercise, dude!

And then they find out a lot of my songs are fiction. You know, Stephen King is not a moss-covered swamp monster. He just writes about that shit. But people never think that songwriters can be fiction writers. I remember back on the first Ass Ponys record, the song “Mr. Superlove,” people would come up to me and say, ‘Dude, I can’t believe you threw your wife down the stairs.’ Because I didn’t! It’s a fucking song! If I would have gone through all the shit in every one of my songs, I’d probably be dead.

Speaking of Stephen King, the new record has a song called “Children of the Corn” that is pretty directly inspired, yes?
Yeah. Just Malachi, the nut leader, you know? The one that takes everything way too far, and everybody kind of follows in behind him like sheep.

You’ve also said there’s political content on this record.
If that’s what somebody wants to put in there. I mean, that’s what I was thinking about when I wrote it, but you might be the first person I’ve said that to. I’d rather people insert what they want into the songs. I trust the people that like us to do their own interpretations. I’ve heard interpretations of my songs that I liked better than what was intended.

So now that this record is out, I feel like if somebody asked me, ‘What’s a typical Chuck Cleaver song title,’ I’d have to go with the closing track: “Folk Night At Fucky’s.”
Well, that’s what we’ve been calling the tour. Every night I’m like, ‘This is Mark. This is Lisa. I’m Chuck. And this is “Folk Night At Fucky’s.” ’ It just fits, you know? 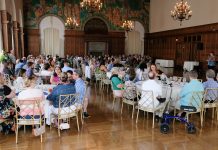