Home Things To Do Will DORA Lead the COVID-19 Recovery Efforts at The Banks?

Ever since it was announced back in December, the Designated Outdoor Refreshment Area (DORA) at The Banks—which essentially allows patrons to openly carry alcoholic beverages within specific areas—has been billed as a way to bring life back to riverfront businesses after the long hard year under pandemic restrictions. While poor weather conditions may have dampened turnout on the first days of operation last week, participating bars were more than pleased with the turnout over the weekend.

Daniel Scott, owner of Fishbowl at The Banks, says the Thursday start was beneficial for his business so his staff could get a test run in before serving the weekend crowd. He estimated that about 25 people took advantage of the DORA at his business on March 25, the first day. While he and his employees were prepared for a big turnout, Scott notes that weekend numbers were higher than they had anticipated. “The lines started for carryout drinks at noon and didn’t stop until midnight,” he says.

To help with wait times and long lines, Fishbowl added another outdoor station to buy beverages this week.

In addition to long wait times, patrons also noticed a lack of seating options. Tracy Schwegmann, a press representative for The Banks, says the DORA will incorporate more seating areas in the future, but the goal is ultimately to get people to move around the whole space to maintain effective social distancing. “I think you’re going to see some of the bars and restaurants modify their storefronts so that will better accommodate and facilitate serving into an outdoor environment like that,” she adds.

The Banks’s DORA isn’t the first in the area. Middletown started the trend among Ohio municipalities when it became the first to establish one more than five years ago. Middletown’s designated region has expanded to less than one-half square mile in size, which equals about 320 acres. In contrast, Harrison’s DORA is only five acres and encompasses its historic downtown. The Banks lies in the middle with 85 acres. 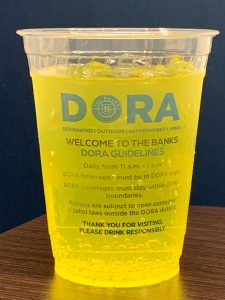 Unlike Middletown, The Banks provides DORA cups for free for anyone who bought a drink at an establishment in the designated zone. It is prohibited to bring any outside alcohol into the space, and Smale Park is not included in the DORA boundaries.

The Banks’ DORA incorporates similar rules as other DORAs in accordance with the Ohio Revised Code, but Schwegmann says what makes it unique is that more than a dozen bars and restaurants, four entertainment venues, and a multitude of green spaces and public plazas call the space home.

“The fact that it was designated as an entertainment district, the fact that there’s a DORA in place now as part of that, seems kind of like the natural next step,” Schwegmann says. “The natural evolution as The Banks is growing up and maturing.”

Schwegmann and Scott stress the importance of continuing to follow COVID guidelines to ensure a safe and enjoyable experience for everyone.

“I still want to urge folks to spread out, keep your distance and mask up when close to others,” Scott says. “We are all working to improve the experience. It’ll only get better.” 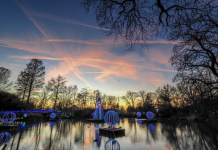