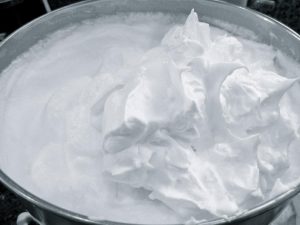 mixture of raw egg whites and granulated sugar. Normally at this early stage of making meringue I would be multi-tasking – folding whipped cream into the chocolate base of the soon-to-be mousse; lining up glassware to spoon the finished chocolate mousse into – but today I am lulled by the whirr of the heavy duty motor and the rotation of the whisk, so instead I stand. And stare. Soon, I no longer hear my radio resounding with a triple dose of Springsteen, nor the lunchtime activity of the restaurant kitchen above me. And even though this occurred in 1976, I’m sure to this day I did not respond to the dining room manager shouting a hello on his way to the subterranean wine cellar. I just stand and stare, transfixed by the wizardry of 30 translucent whites morphing into an opaque cloud. At that moment, it occurs to me that I had never seen anything so damn beautiful as this industrial sized bowl brimming with a billowing, gleaming mass of meringue, the peaks gently falling back onto themselves. I turn off the Hobart mixer, remove the whip, and roll up the sleeves of my chef jacket.

Long days in a basement kitchen can cause an otherwise responsible and clear-headed pastry chef to go a bit buggy now and then.

I plunge my bare arms down into the bowl, squeeze the meringue through my fingers, coat my arms, face, and neck; shove handfuls into my mouth. Had it not been for the cold dampness of the 19th century basement, I may have removed my jacket and…well, I did not. What I did do in my fugue state was deflate the entire bowl to a dull mess. Ruined. Unusable. And the remains of which plastered (*) mixer, prep table, skin, hair, and clothing.
Uh…Oh.  No chocolate mousse on the menu tonight. I hope the waitstaff will spare the diners of details.

(*) Plaster is a good word to remember should you be inclined to have your own meringue party. It dries like glue.

CHOCOLATE MOUSSE
This is the mousse I made as pastry chef of Mecklenburg Gardens in the late ’70s. I am indebted to Master Chef Eugene Bernard, a Frenchman, disciple of Escoffier, renowned respected chef, and generous teacher. It is a classic preparation using hot sugar syrup and therefore requires attention and a gentle hand. Your patience will be rewarded – to this day I have never found a chocolate mousse I like better than his.

METHOD
Whip cream until it holds firm peaks. Refrigerate. Melt chocolate in double boiler or in a bowl set over simmering water. Set aside (it should remain lukewarm). Combine ¾ cup of the sugar plus the 3 tablespoons of water in a pot over a medium flame to dissolve. Increase heat and bring to 230 degrees on a candy thermometer. While the sugar is cooking, place yolks in the bowl of a stand mixer and whip at high speed until pale yellow. When sugar syrup has reached 230 degrees remove from heat and – with speed at lowest setting – add to whipped egg yolks. Increase speed to highest setting and whip for 15 minutes or until they resemble butter. On low speed, add melted chocolate to whipped yolks and mix until just blended. Transfer mousse base to the large mixing bowl and wash the stand bowl well until no traces of yolk remain. Fold in a quarter of the whipped cream into the mousse base to lighten it. Fold in the rest of the cream along with the Grand Marnier. Place the egg whites in the stand mixer with a pinch of salt. Whip at high speed, gradually adding the remaining ¾ cup of sugar. When the whites produce firm (not too stiff) peaks, fold ½ in to the chocolate and cream base. Fold in the remaining meringue until no streaks remain.  Chill for two hours until set.