Home Food News Drinking News What You Need to Know About Bourbon from The Party Source’s Resident...

Father’s Day is right around the corner, and wedding season is upon us, too. A bottle of spirits makes for a unique gift for someone special in your life, as is concocting a favorite cocktail to mark a special occasion. Before you aimlessly peruse the aisle, The Party Source night manager and bourbon expert Eric Brown shares tips and myths about bourbon and what you should consider when buying a bottle.

Bottled-in-bond bourbon is a hot item

From recipe distinction to barreling rules, bourbon is highly regulated. One regulation dates back to the 1897 Bottled-In-Bond Act that was passed to ensure bourbon was pure. Today, Brown says bonded whiskey is defined by being at least four years old, distilled in one season (there’s two six-month seasons per year), distilled from one distillery, without any added coloring and flavoring, and aged in a brand new oak cask. Brown recommends New Riff’s Kentucky straight bourbon, a local distillery located in front of The Party Source.

Making a cocktail? Opt for rye whiskey or 100-proof bourbon

A classic Manhattan recipe calls for rye whiskey to balance the ingredients in the cocktail. Brown says rye is a little bit more aggressive in flavor and a little bit spicier than bourbon and recommends James Pepper barrel proof rye whiskey or Old Forester’s rye. “For an old fashioned or Kentucky mule, I wouldn’t use anything less than 100 proof,” says Brown. “I would use Old Forester 100 proof. And you can drink on the rocks—it’s my go-to, everyday bourbon.”

We all love a good bar cart or shelf to display fancy bottles, but it doesn’t mean the contents are superior when it comes to whiskey. “I try not to buy bottles that are really extravagant and over-the-top,” says Brown. “If you’ve got a good whiskey, you don’t need a good bottle to put it in. You can put it in anything.”

“I think if people are buying bourbon based on price, they’re really doing a disservice,” says Brown. “There’s a lot of things that are better and more attainable.” The Party Source receives very limited amounts of some of the most sought-after bourbons in the country including Buffalo Trace’s famous Pappy Van Winkle, W.L. Weller, and Eagle Rare. But Brown says there are plenty of other incredible options that are easier to find. Still, if you’re willing to take a shot, The Party Source offers raffles for rare bourbon releases. Another unique element to The Party Source is its barrel program. Team members visit distilleries, sample different barrels, and hand-pick what to bring back to the shelves at The Party Source. 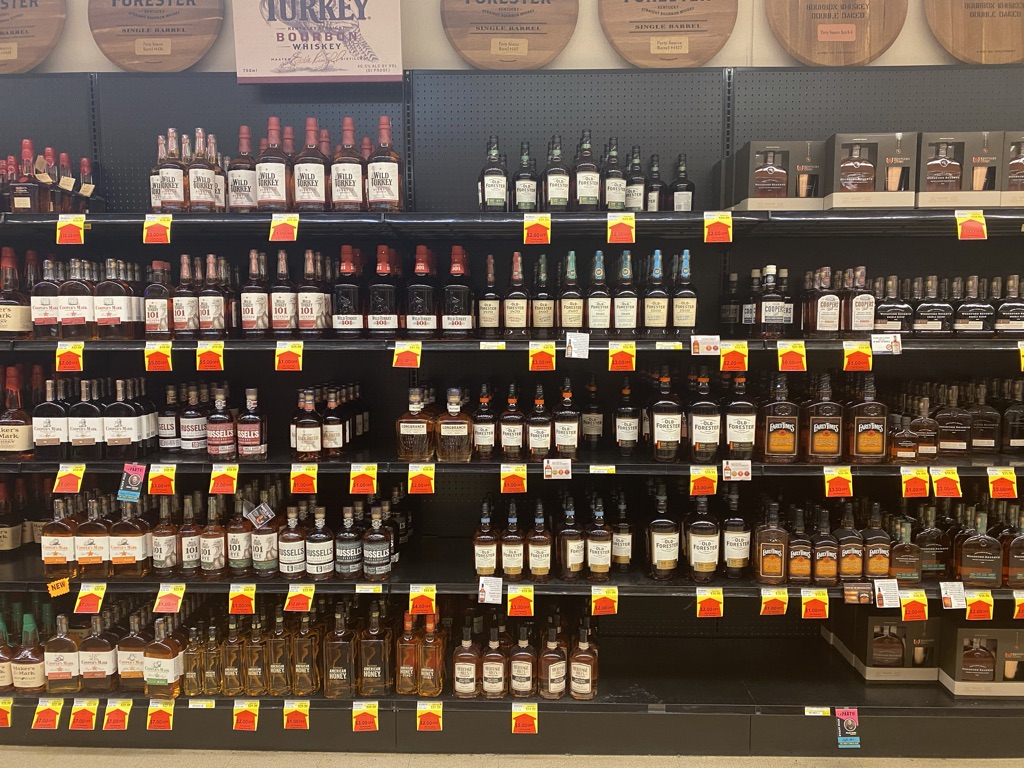 Ask someone in the bourbon aisle at The Party Source. Brown says people should always buy items like liquor from specialty places like The Party Source. “To ask someone for help in the bourbon aisle is my best advice,” adds Brown. “We can ask questions like: What do you like? What have you tried? Are you open to trying something new? Those are the questions we ask to determine what their flavor profile is to recommend bourbon or rye or scotch or Canadian whiskey or rum.”