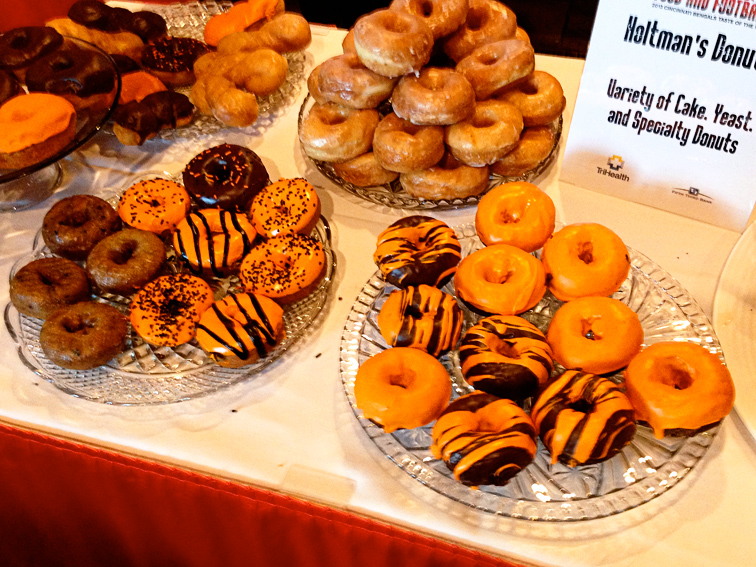 The Bengals wrap up their final pre-training-camp practice this afternoon. After last night, it will be a struggle for quite a few players to make it through those wind sprints.

The squad teamed up with Freestore Foodbank for the 11th annual Cincinnati Bengals Taste of the NFL. A murderer’s row of 40-plus local restaurants and food services set up shop in the West Club Lounge at Paul Brown Stadium, offering an amuse-bouche type dish to show off what each of their kitchens is working with. Those devouring the food were a mixture of local dining fans, football fans, and football players.

The Taste of the NFL is a now league-wide program consisting of individual team events that raise awareness and money for the hungry and homeless, the funds benefitting local charities and non-profits. Each year pairs a Bengals athlete with a restaurant/restaurateur as well, with the 2013 honors going to defensive end Carlos Dunlap and Chef David Falk (of the Boca, Nada, and Sotto triumvirate). Guests who purchased the $150 tickets were also welcome to attend, where they could eat like linebackers, bid on auction items, and even score autographs and pictures with their favorite Bengals players (between bites of food). All told, the evening raised $125,000 for the Freestore Foodbank, enough for 375,000 meals for needy families.

“I was honored,” said Dunlap of his inclusion in the event. “They hit me up and asked if I’d be interested in doing it, so I said of course.”

The standouts among the noshing options were impressive but far from surprising, including Senate’s “Boot & Belly” sandwich (pork butt and belly sliders with fried onions and slaw), the confit chicken salad from Jean-Robert’s Table (with orzo pasta, white beans, and arugula), Metropole’s quinoa fritter (with feta cheese and a creamy cashew puree), and the phyllo cups with potato and barbecue pork from Boquet. Holtman’s Donuts did a nice decorating job too, which I finally took the time to appreciate after eating about a million of them. Defensive tackle Geno Atkins, who headlined last year’s event, was a fan of the Senate, Keystone Bar & Grill, and Streetpops offerings.

Dunlap even managed to show off some dining knowledge regarding his culinary partner-in-crime for the evening. “I haven’t been to the new Boca yet, because it just opened, but I’ve been to [Falk’s] other places multiple times,” said the fourth-year defensive lineman, who also employs a private chef of his own. “I love Sotto. It’s authentic Italian. If you go, you have to get the bistecca. And make sure you bring a few big eaters with you. You won’t be able to finish it by yourself.”

(By the way, he’s not lying. Sotto’s bistecca is a 35-ounce porterhouse.)

Dunlap was happy with the overall showing as well. “I got a couple business cards from new places,” he said. “I like the little appetizers they had for us, so I’m gonna have to check them out.”

He might even get the chance to do so with the guest who shelled out a few thousand bucks during the auction for a chance to eat dinner with the Cincinnati Bengals defensive line. Or if they go to Sotto, they can just polish off that bistecca.