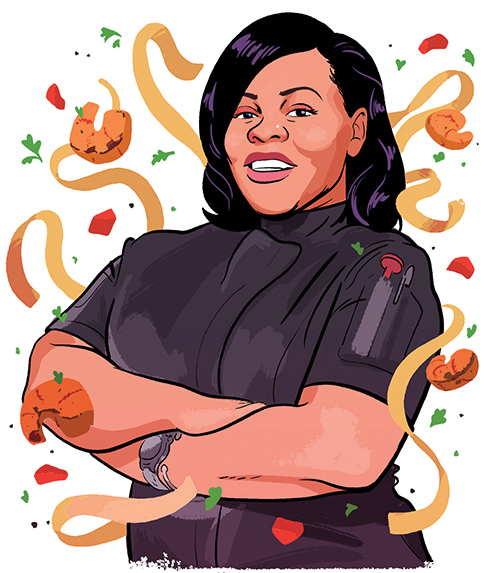 A lifelong love for food and spices and a business and economics education were the perfect pairing to bring this self-taught Cincinnati chef back to her culinary passion. Since launching catering company Soleil Kitchen in October 2016, her client roster has grown to include the city’s top corporate names, and now she’s eyeing her next move.

Why start a catering company?
I have always cooked. I’ve always had a passion for food and spices, as early as I can possibly remember. I opted out of going to culinary arts school because I went to school for business and economics, but life has a funny way of bringing you back to your passion.

I had left Cincinnati and moved to Atlanta, and it was funny, because when I came back to Cincinnati about four or five years later, I realized with a lot of the food in Cincinnati at the time there wasn’t really a source for healthy cuisine from different cultures. I wanted something that was going to be accessible and incorporate the multicultural options from each community. So that’s how I came up with Soleil Kitchen back in October 2016, when it officially launched.

How did you get started, and how have you grown your business?
Findlay Kitchen is an amazing start for so many businesses like mine because it’s the perfect alternative to jumping straight into a brick-and-mortar location. Instead of having to worry about overhead costs, any of your bills associated with that, it gives food entrepreneurs the space to go from ideation to launch.

I got started with Findlay Kitchen back in 2017. I went through the Mortar program that year as well. I love those guys—they’re super dope. After I went through the program, I mentioned to them that I was looking to get a space. We started to have a lot more corporate clients, like P&G and Cincinnati Children’s, and they were like, Maybe you should get into a space that will work around your schedule, so that’s how I came across Findlay Kitchen. It’s been a really great relationship ever since.

What services do you provide?
We offer private and corporate catering, and we also do private and traveling chef services. I work in other markets like Atlanta, Dayton, Columbus, and we’re looking to expand that to other areas as well. We also offer meal-prep services and do pop-up events.

What inspired the name Soleil Kitchen?
Funny story. Back in 2015 a group of my friends came together and we had this vision of where we saw our lives in three to five years. Some saw themselves in another state, and almost all of us said, Hey, I want to start a business. I was looking through all these different names and I was attracted to “sun,” because it’s like shining a light on different foods. I looked up sun in French, and it was soleil, and I liked it. Something about it resonated with me. And here we are in 2019, and it’s part of our business model: We are shining a light on different multicultural cuisine, one delicious bite at a time.

Could you describe your signature concept, Urban Cuisine?
Being in the center of intersectionality—I’m black, I’m a woman, I’m Muslim—I felt like foods in Cincinnati weren’t really diverse. Urban Cuisine encompasses the different seasonings and spices that each community has. We source organic ingredients as much as possible, local ingredients, less fried, less greasy foods. We don’t offer any food on our menu that’s actually fried. We incorporate a multitude of dishes. Whether it’s Cajun shrimp pasta or Southern food, like your traditional shrimp and grits that we add our own twist to. It’s not necessarily just soul food. We have Italian food, Indian food; we incorporate a lot of Caribbean food, whether it’s Jamaican or from the Bahamas. We incorporate a lot of multiethnic food.

With your food, do you think you’re clearing up misconceptions about ethnic cuisine being unhealthy?
Absolutely. Even with soul food or comfort food, it’s a lot of times associated with hypertension or diabetes. But it doesn’t have to be that way. Anything can be made to be a healthy alternative. Foods don’t have to be salty; they can be spicy, well-seasoned. Especially with Italian dishes, they’re usually very heavy, with a lot of sauces, dairy, and cheeses. Even with those foods, we still want you to understand the story of those dishes—so we don’t want to manipulate a recipe [so much] to lose that culture from where it originated, but maybe have more vegetable options. So if we’re making a pasta dish, adding sautéed spinach with it or broccolini, something that will balance out the heavier [elements] that those dishes traditionally have.

What’s the most rewarding part of your work?
Being able to bring [healthy food] to Cincinnati and bring it to the forefront. It’s like, Hey, there’s so much delicious food out here. You might look at some Caribbean dishes and think, I’m not going to like that, and I’m like, Trust me, you really will. It’s kind of like getting to know peoples’ palates.

What are your plans for the future of Soleil Kitchen?
We’re going to start hosting more pop-up events. We’ll be celebrating our three-year anniversary this December so we’re hosting an anniversary party just to get people more aware of Soleil Kitchen and all the things we have to offer. We’re considering a brick-and-mortar location, but just adding to our menu to be able to have a plethora of things to offer for people in Cincinnati. So whether you’re vegan, pescatarian, vegetarian—there’s something that Soleil Kitchen can offer you.