Home Food News Smash Into Me

It is certainly possible for the pairing of beer and burgers to be disappointing. Last night, 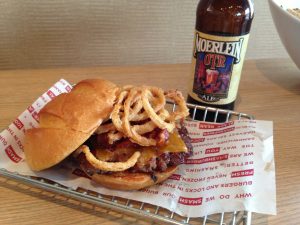 however, provided no evidence of this.

Smashburger in Highland Heights hosted a media event Thursday evening to introduce the “better burger” chain’s local partnership with Moerlein Lagers and Ales. The food and drink duo have worked together to create a pairing menu of seven burgers/sandwiches with five variations of Moerlein brews. Smashburger founder Tom Ryan and Moerlein brewmaster Richard Dubé were on hand to present and provide insight for each combination. The options ranged from the Classic Smash burger alongside the Lager House Helles to the Spicy Baja Black Bean Burger with a Northern Liberties IPA.

“Food pairing with beer is still in its infancy,” explained Dubé. “This is the vision of how our beautiful beers can pair with these beautiful burgers.”

Ryan, who earned a Ph.D. in Flavor and Fragrance Chemistry from Michigan State University and resembles a less cartoonish Graydon Carter, started Smashburger in Denver back in 2005. The burgers are made from certified angus beef, formed into meatballs and then smashed on the grill, providing the name for more than 200 installments of the chain spread across five countries. Five of those 200 are in the Cincinnati market, with a Hyde Park location coming soon.

The restaurants’ relationship with Moerlein developed out of Ryan’s desire to localize each Smashburger menu to its specific market, as well as wanting to couple his higher-quality burgers with a worthy craft beer. This was also evident via the menu’s Buckeye Burger option—available only in the Ohio market—piled with fried banana peppers and paired with the malty Exposition Vienna Lager. The crunchy, golden-brown kick of the banana peppers was a favorite appetizer of Ryan’s while living in Cincinnati during the 1980s.

By now, local imbibers are privy to the deliciously frothy beers of Christian Moerlein Brewing Co., but the Smashburger patties proved to be a more than admirable running mate. The Mushroom Swiss was my favorite of the seven, with the baby portabellas and aged cheese offering a melt-in-your-mouth steak hoagy taste that was perfect for the smooth and roasted flavor of the Barbarossa Dark Lager. The majority of those in attendance appeared to have the same response, including my girlfriend, who generally isn’t a “big beer drinker”—much to the dismay of a crestfallen Dubé—but contently polished off the lager, leaving only a hint of foam at the bottom of her glass. The BBQ, Bacon, & Cheddar Burger—with a mound of haystack onions and what Ryan described as an Oklahoma barbecue sauce, mixing the sweet and smokiness of Kansas City and Texas sauces—was a relatively close runner-up for me, playing nicely off the hoppy OTR Ale. If forced to pick a least favorite, it would likely be the still-enjoyable Avocado Club Chicken (though to be fair, I’ve never been a fan of avocados on my sandwiches).

And make no mistake, there was clearly a science to these concoctions, with both men putting a great deal of thought toward which beer would accompany each dish. Dubé described it as a “compare, contrast, or combine attitude,” whether that meant complementing the earthy, meaty flavor of the Mushroom Swiss with a rich-and-thick dark lager, or offsetting the heat of jalapeños in the black bean burger with the bitterness and citrusy notes of the IPA. No pairing tasted out of place, and the plan is to refresh the menu every now and then with a few of Moerlein’s seasonal brews. Ryan offered only a mild hyperbole when describing the courtship as “America’s best food created for the next generation, paired with the best beer re-created for that same generation.”

We were also able to sample a few of Smashburgers’ diverse side options, including the Smashfries (tossed with rosemary, olive oil, and garlic), the fried pickles, and the impressively tasty veggie frites—a basket of flash-fried carrots and green beans, for that cultured consumer who prefers a lighter side dish with their angus burger and craft brew. The shakes, made with Häagen-Dazs ice cream, were also on par with the evening’s culinary precursors.

Price won’t be a deterrent either, with no burger or sandwich on the menu running more than $7. Sides (purchased a la carte) range from $2-$3, and the Moerlein beers (which were all served out of the bottle) cost just under $3.50.

No doubt, Smashburger and Moerlein do burgers and beers the right way. If we’re lucky, forever the twain shall meet.