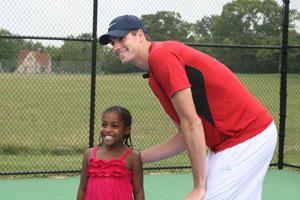 Before taking the court in Mason for this week’s Western & Southern Open, pro tennis player John Isner stopped by the newly refurbished tennis courts at the North Avondale Recreation Center. The renovation project is part of the nationwide Fresh Courts initiative by the U.S. Tennis Association and American Express to rebuild and improve damaged community courts. Isner, currently ranked 27th in the world, is known for his 11-hour, three-day match at Wimbledon in 2010—the longest match in tennis history. We asked the 6-foot-9 Isner about why the Western & Southern is the hardest tournament in tennis, the importance of youth tennis, and his ferocious serve.

How did you get involved with Fresh Courts? I’ve partnered with American Express the last two years, and it’s something that they are a part of. They asked me to help. Anytime you can get a community out and refurbish a center like this and get the kids out and get them active is phenomenal.

What’s so important about this program? I’m a tennis player, so I like the fact that they are refurbishing these courts and getting the community active. I know how important it was for my development as a player and a person growing up to have good facilities and good courts to practice on. That played a huge role in me playing professional tennis today. If you can get these kids out and playing this sport, chances are a lot of good players are going to come out of it.

Do you think that could help raise the game’s profile and appeal to a broader base of kids in this country? It seems that tennis in the U.S. is probably the fifth or sixth most popular sport. All the kids are playing football, basketball, and baseball. That’s probably one of the reasons why the U.S. isn’t doing really well in the game, like we did in the ’80s and ’90s. Getting more kids involved in this sport would be great.

Switching gears to the Western & Southern Open this week, how do you feel it stacks up to the other tournaments on the professional tour? Well, to be honest, there is no tougher field in the world. Like, 19 of the top 20 players [men and women] are here. It’s a smaller draw, which makes for tougher draws. In the Grand Slams, the draw is 128, and guys ranked 100th get directly into it. You have to be ranked pretty much inside the top 40 to get directly into this event. As far as comparing it to every other tournament, there are none tougher than this in our sport.

I’m sure you and the other players appreciate the cooler weather this year much more than the conditions in year’s past, too. The humidity is what kills me when I play. I sweat so much that I’m going through like seven or eight shirts. I just get drained. So this is perfect.

Have you been able to spend time in Cincinnati, either this year or in year’s past? I have a lot of friends here, so I’ve been hanging a lot with them, but also practicing quite a bit and trying to get used to the court. Pretty much any restaurant you could imagine is either in Mason or in Cincinnati. I guess my favorite would be Embers. But I’m really comfortable here. I enjoy playing in the States a lot more than I do in Europe or Asia.

How do you feel about your tennis game right now? I feel I’ve been playing well this summer. Very well. The first four months of the season were a bit of a struggle for me. I just wasn’t playing my best. Finally, I came around in the tournaments in the States. I’ve won 14 of my last 17 matches. I definitely want to keep it up. Obviously the goal is to peak at the U.S. Open [Aug. 29–Sept. 11], and that’s what I plan to do.

What do you feel is the biggest advantage you have in your game? Well, it starts with my serve, obviously. After that, it’s my forehand. When the ball is in play, that’s the shot I want to try to hit. It’s not that I shy away from my backhand, but if I have any chance to hit a forehand, I’m going to try to get my feet around it and hit it. Other than my serve, that’s mainly my finishing shot.

Have you seen the graphic where they show the release point on your serve as like 11 feet in the air? Is that something you work on? I’ve heard about that. But it’s not something that I work on. It just comes naturally because I’m so tall. With the ball toss, and me getting up in the air a bit, and with the racket being as long as it is, it’s going to come down at a pretty steep angle.

You’re obviously a big athletic guy. Did you play any other sports growing up other than tennis? Basketball. But I gave it up when I was 15 because the schedules conflicted too much. When I was about 17 or 18, that was when I started growing—a lot. Had I known, honestly, I probably would have stuck with basketball. I went from like 6-foot-2 to about 6-foot-8 in a year. I was getting the hand-me-downs from my brothers but I grew out of those. Fortunately for me, it didn’t really affect my tennis game too much. Once I started growing out instead of up, that’s when I started getting my coordination back and growing more and more comfortable on the court.

I’m sure you get this question all the time now, but how much has your life changed since that Wimbledon match in 2010? I guess I’ve gotten a lot of notoriety from that match. Everybody seemed to be interested in what Nicolas Mahut and I did over those three days. It’s kind of a freak thing. It’ll never happen again. You know I played him again this year at Wimbledon, and it took 9 hours less. When people see me walking around they assume I play basketball, but then they take a closer look and I’m that really tall tennis player that played in that match. But it’s good and I like it. I get a lot of support when I play in the States.