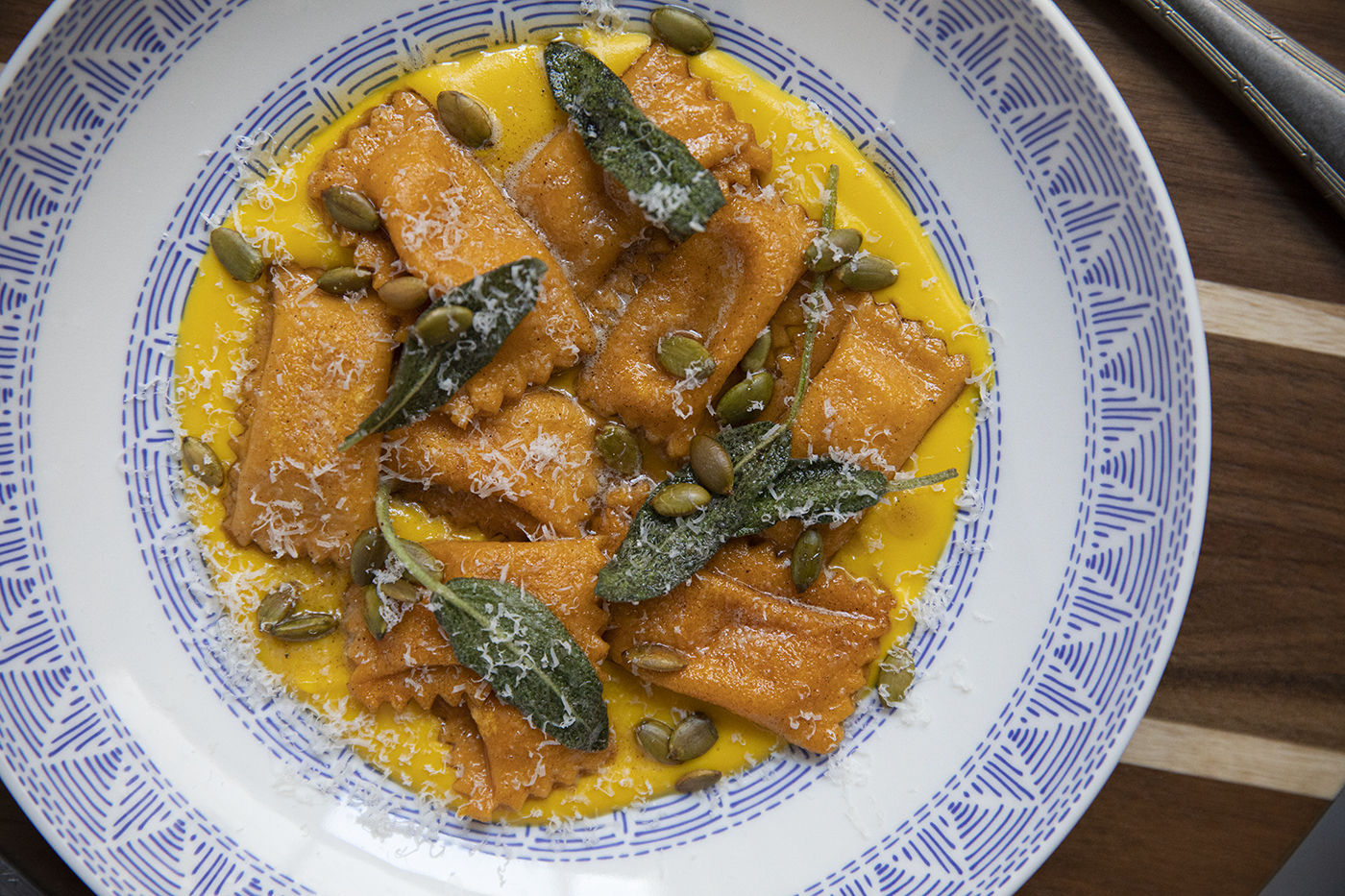 Opening at the corner of 15th and Vine streets in Over-the-Rhine is the ninth concept from restaurant juggernaut Thunderdome Restaurant Group (behind Bakersfield, The Eagle, Maplewood, and others)—and its Italian roots hit closest to home for its cofounders and owners Joe Lanni, John Lanni, and Alex Blust.

The restaurant is named after the Lanni brothers’ Italian immigrant grandparents Giuseppe and Addolorata—Pepp and Dolores to friends and family. Pasta is the starring section of the food menu, which also features pane (bread), cicchetti (appetizers), insalata (salad), and contorni (sides for the table).

“When we were kids, the pasta was the focal point of the meal,” John says.

As a tribute, they put a family favorite on the menu—what Joe calls a “true representation” of what the brothers grew up eating. The Sunday Sauce, bigoli pasta (long, thick strands with a firm bite) sauced with “Nonna’s red sauce,” served with veal-and-pork-blend meatballs, a hearty braised pork shoulder, and a fresh grate of Parmigiano-Reggiano, is a replica of one of grandma Dolores’s actual dishes.

“She had a dash of this, cup of that approach [to her recipes],” says Joe. “This is as close as we could come from talking to our mom and aunts.”

The restaurant’s culinary team, led by executive chef Justin Uchtman (former executive chef of Sartre), sous chef Gene Turner, and culinary director Matt Owens, along with the cofounders, crafted the rest of the dishes, spotlighting regional Italian classics and adding their own twists.

Among the pastas, the layering of flavors in the butternut and mascarpone, with filled agnolotti, brown butter, butternut squash puree, sage, pepitas, and Parmigiano-Reggiano, is nuanced and rewarding, demonstrating this culinary team’s prowess in the category.

All nine of the restaurant’s pastas are made fresh in house continuously through dinner service in the kitchen-adjacent pasta room. Diners—and passersby—can get a front-row view of the action through a sidewalk window.

Perhaps the most surprising standouts are in the vegetarian dishes, like the vinaigrette-marinated cucumbers, topped with ricotta and fresh basil leaves; the artichokes alla giudia: marinated and dusted in rice flour before frying—rendering the most delicately crisp crunch—and served with a lemon vinaigrette; and the eggplant involtini (what Blust calls “eggplant parm, but without the guilt”): eggplant slices filled with a seasoned ricotta mixture, served with house tomato sauce and topped with toasted breadcrumbs and Parmigiano-Reggiano.

The wine list is extensive for a casual eatery, with sparkling, white, orange, rosé, red, two reasonably priced house options, and sections dedicated to domestic and nontraditional Italian varieties. The cocktails center on Italian favorites, with a spritz, Tony’s Negroni (named after food and beverage director Tony Dornbusch), and a Fratelli Libre, made with house bottled and carbonated soda, among others.

There’s no true dessert course, though the cofounders are considering the idea. It’d be a first for the group since none of their restaurants serve dessert. They do, however, offer sweets by way of a housemade limoncello service and Lazzaroni amaretti cookies with the check.

Pepp & Dolores is divided into three main areas: a front bar, a full-size first-floor dining room, and a lower-level bar/dining room. The ground floor and lower level boast separate but unified identities: the first-floor, 50-seat dining room and bar has an airy upscale café feel (its large windows will eventually open with temperate weather) that’s versatile enough for a date night or a casual meal; and the 45-seat lower-level area, decorated with more than 200 photos of the cofounders’ families (Pepp and Dolores are prominently featured under a spotlight), is a dimly lit clubby spot with a swanky feel reinforced by the musical stylings of Frank Sinatra.

Of the interior design, John says, “We really wanted to make it a true period piece that was specific to them.”

While the restaurant is currently only serving dinner, it will transition to lunch service as it settles in. It does not take reservations.

True to Thunderdome’s approach at its other restaurants, everything feels affordable and casual, but without sacrifice. All of the pasta dishes are less than $20, and generally, you get a lot of bang for your buck—plus a fancy-feel atmosphere and knowledgeable and passionate staff to boot.

Dinner Tuesday–Thursday 4–10 pm, 4–11 Friday–Saturday, 4–10 Sunday. The bar is open until midnight on Fridays and Saturdays.