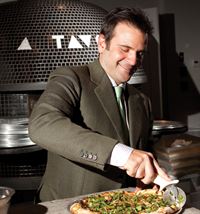 East-siders will enjoy knowing that they no longer have to trek down to OTR to get their Neopolitan pizza fix. Brothers Nick and Jared Wayne, co-owners of A Tavola OTR, opened a second location in Madeira last week with the same menu. They also installed an identical Ferrara wood-fired oven in the new location. A Tavola Madeira is the first American pizza joint to boast an Italforni Bull oven, designed specifically for making thin-crust, Roman-style pizza. While the second oven isn’t up and running just yet (they’re still perfecting the dough recipe), their signature favorites such as the cinghiale meatballs; the eggplant parmesan sliders; and the asparagus, artichoke, and feta pizza were all more than up to snuff.