It’s not hard to figure out why this 1892 East Walnut Hills home is nicknamed “the Swiss Chalet.” Designed by architect Lucian F. Plympton for industrialist Albert Day Fischer and his new bride, Alice Teasdale Fischer, the home was to be a life-sized reminder of the couple’s honeymoon in Switzerland. Since then, it has been featured in multiple magazines (once gracing the cover of Architectural Digest) and was named by architectural historian Walter Langsam in Great Homes of Cincinnati as “one of Cincinnati’s most unusual and influential dwellings.”

The elaborate exterior gingerbread, which listing agent Connie Greene says is painted with roughly 33 different colors, is just the beginning. Inside, there are so many striking features in this three bedroom, three bath home, it’s tough to focus on just one: the curved main staircase, where no two wood steps are exactly the same shape; a unique accordion-esque concrete, brick and beam ceiling in the front hall; arched accents throughout—even on a basement window; the wood-paneled kitchen; even the authentic Dutch-style front door.

Today the property is listed for $549,000 and includes a swimming pool, painted black to look like “deep, rich pond,” says Greene, plus a former pony stable, which now has a full bath and serves as a pool house. Perhaps most enchanting of all, the home also comes with a distant view of the “Kentucky hills,” says Langsam in Great Houses—“romantic, if not quite the Alps!” 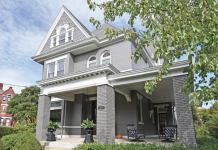 This Northside Revival Once Belonged to a Cincinnati Soap Mogul 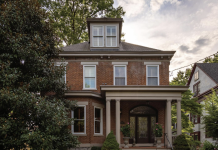