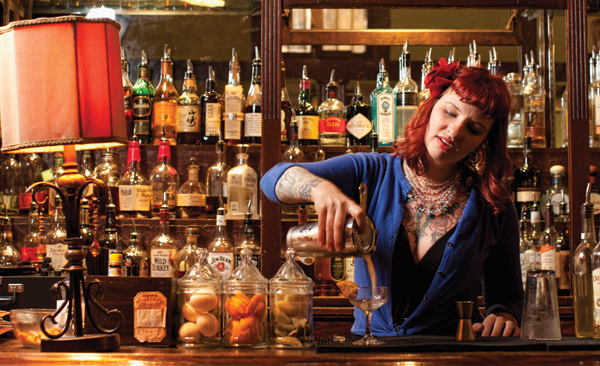 A tribute band’s work is admittedly more interpretive than creative, but done well it can also be a lot of fun. Long-time genre veteran John Stankorb’s current project, Signs of Life, pays nearly pitch-perfect homage to Pink Floyd. If you squint a little, Stankorb looks vaguely like David Gilmour. More to the point: If you close your eyes (though we don’t recommend it; you would miss the spectacular light show), your ears might tell you that it’s 1979. signsoffloyd.com

Like beer and laughing? Brew Ha-Ha lets you see a bevy of local and touring comics while sampling more than 140 different beers, all for the low admission price of $0 (well, you have to pay for the beer). Local comedian Josh Sneed, who booked talent for Brew Ha-Ha this year, says the goal is to offer top-notch comedy and show there’s stellar unknown talent out there. “Even if you don’t recognize the name, you’re going to laugh and have a great time.” cincybrewhaha.com

Head to Turfway from December through April or in September and watch the races outside, up against the rails. There, you can see the horses parade around pre-race, ask an old-timer for advice on making a bet, and feel the impact of their hooves as they exit the gate. No spinning wheel in the world can match watching your horse of choice thunder across the finish line. Florence,
turfway.com

Sure, it can be crowded, but Holy Grail is still the best hangout on game day. Plenty of TVs so you can catch all the other NL Central action. Great American is literally within spitting distance. You get advance notice of the lineup on the pillar at the bar—they show Mesoraco currently batting seventh, since he started the last game. And their beers are only $5 for a 20-ouncer during Reds games. Bonus: good wings. Downtown, holygrailcincy.com

Professional athletes will only be as accessible as they want to be, with the chances of striking up a casual conversation admittedly slim (unless you’re a college-aged female). Nevertheless, Lunar Lounge offers you the best opportunity to catch the city’s studs in late-night action. Reds and Bengals players (Brandon Phillips, Aroldis Chapman, Jerome Simpson, and more) frequent the tech savvy club in-season, mainly on Wednesdays (College Night) and Fridays. Just be cool, OK? Downtown, lunar-cincy.com

Once you step through the door of Straus Tobacconist’s Florence store and ogle the glass-walled walk-in humidor and the commodious lounge with dark leather club chairs, you know: This is the place to enjoy a smoke. With more than 500 different types of cigars from beaucoup top-name labels (Fonseca, Arturo Fuente, Por Larrañaga, Macanudo, and Onyx, to name just a few), you should set aside a little time. Choose a cigar. Have a seat. You’ve got nowhere more important to be, right? 8146 Mall Rd., Florence, (859) 647-8600

Build-a-Best: Seats in the House

With Scout seats, especially in section 123, you’ll have a batter’s-eye view of the game. Score a ballpark garage parking pass, and you’re mere steps from your seat (and the private Scouts Alley concession area). (513) 765-7500

Work your social network in real life by setting up shop at one of the tables by the front windows of this OTR bar. The ever-evolving street scene provides plenty of entertainment, and you’re close to the bar without the annoyance of being ordered over. (513) 381-0741

Here, you want a front row seat. If you can nab a reservation for the chef’s table, you’ll have it. Every dish takes shape right in front of you. It’s more than dinner. It’s performance art. (513) 542-2022

Please note that the information listed in this section was accurate at the time the issue went to print in 2011 and that addresses, menu items, company status, etc., may have changed. Please contact the companies to confirm details.