Did you know that the most famous chocolate covered cream egg in the world (or at least, 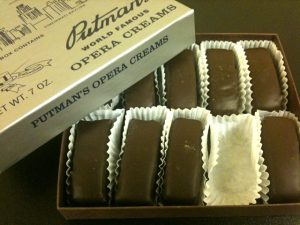 this part of the world) is made in Covington? Family owned and operated by the third generation, Papas Candies has been making cream filled Easter eggs for 86 years. Fun facts:

You can find both the Papas Cream Eggs and Putnam’s Opera Creams at Peter Minges & Son. (If you’ve never been in this store, don’t wait for a candy-filled holiday to get there. As the oldest candy store in Cincinnati, it’s not only architecturally interesting, but its floor to ceiling shelves are stocked with some old-school varieties. Who remembers Sky Bars?).  CVS, Walgreen’s, and Kroger all sell the Papas Easter Eggs as well. 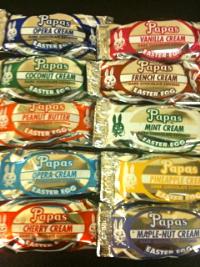 I like the singular flavor of the Putnam Opera Creams (and the vintage style box with the Cincinnati Skyline), and the purity of the ingredients. The Papas Easter Eggs do have hydrogenated palm kernel oils and corn syrup, ingredients I try to avoid when possible. But it was clear that after one bite of the pineapple cream egg—followed by the entire egg  (OK! OK! Followed by three more eggs plus one Putnam Opera Cream)— the only thing I would be avoiding was skinny jeans.