If it’s been a couple of years since you’ve been to Le Bar a Boeuf—Jean-Robert de Cavel’s fun-yet-refined French bistro located on the first floor of the Edgecliff Private Residences in East Walnut Hills—it may be time for a revisit. The restaurant has undergone dramatic (and welcome) changes since our initial review in 2015. The formerly burger-centric menu now approaches the full repertoire of bistro classics. The changes are so extensive that the restaurant’s name, which essentially translates to “The Beef Bar,” no longer fits, despite the numerous cow sculptures that grace its interior. Perhaps “Table Redux” would be more apt.

The closure of de Cavel’s beloved downtown bistro in 2020 is largely responsible for the changes. After Table’s closure, many of that restaurant’s kitchen and front-of-house staff, including Chef de Cuisine Jordan Brauninger, made the move to East Walnut Hills. Luckily, the eatery’s renowned hospitality and commitment to approachably exquisite French cuisine made the move, too.

Service starts with airy slices of warm, crusty baguette, accompanied by a small glass of creamy butter—the perfect start to any decadent deep dive into French cooking. The menu reads like a greatest hits list of bistro fare, with escargot, beef tartare, duck leg confit, steak frites, and French onion soup all making appearances. As France’s influence on American fine dining has waned, it’s refreshing to see a restaurant committed to not only preserving the French classics but reinvigorating them.

As appetizers go, the artichoke appetizer (a deceptively simple name) is highly recommended. The pungent, vinegary artichokes perfectly counterbalance the creamy poached egg, mushroom ragout, and creamy hollandaise, which, like all sauces at Le Bar a Boeuf, is brought to the table in a gravy boat that your server will happily pour over your dish at your request. This welcome option epitomizes the restaurant’s exceptional service; it extends the royal treatment without forcing it on you.

Le Bar a Boeuf has an extensive and thoughtfully curated specials list—one that featured a different array of items on each of my two visits. In true French tradition, the specials make creative use of scraps and trimmings. The fish cakes feature scraps of grouper and halibut, breaded and lightly fried, topped with capers, and served with a tart remoulade. It’s a meaty fish cake, with just enough filler to hold it all together, its briny flavor deeply craveable. De Cavel says that he expects the specials to rotate frequently based on seasonality because most of his meat and produce come from local farmers and purveyors. The freshness of said produce is best typified in the salads at Le Bar a Boeuf. The “Trio of Grapes” might be a bit of a misnomer since the grapes serve more as garnish. The base itself is arugula and cauliflower, supplemented with creamy goat cheese and almonds and drizzled with a red wine vinaigrette. 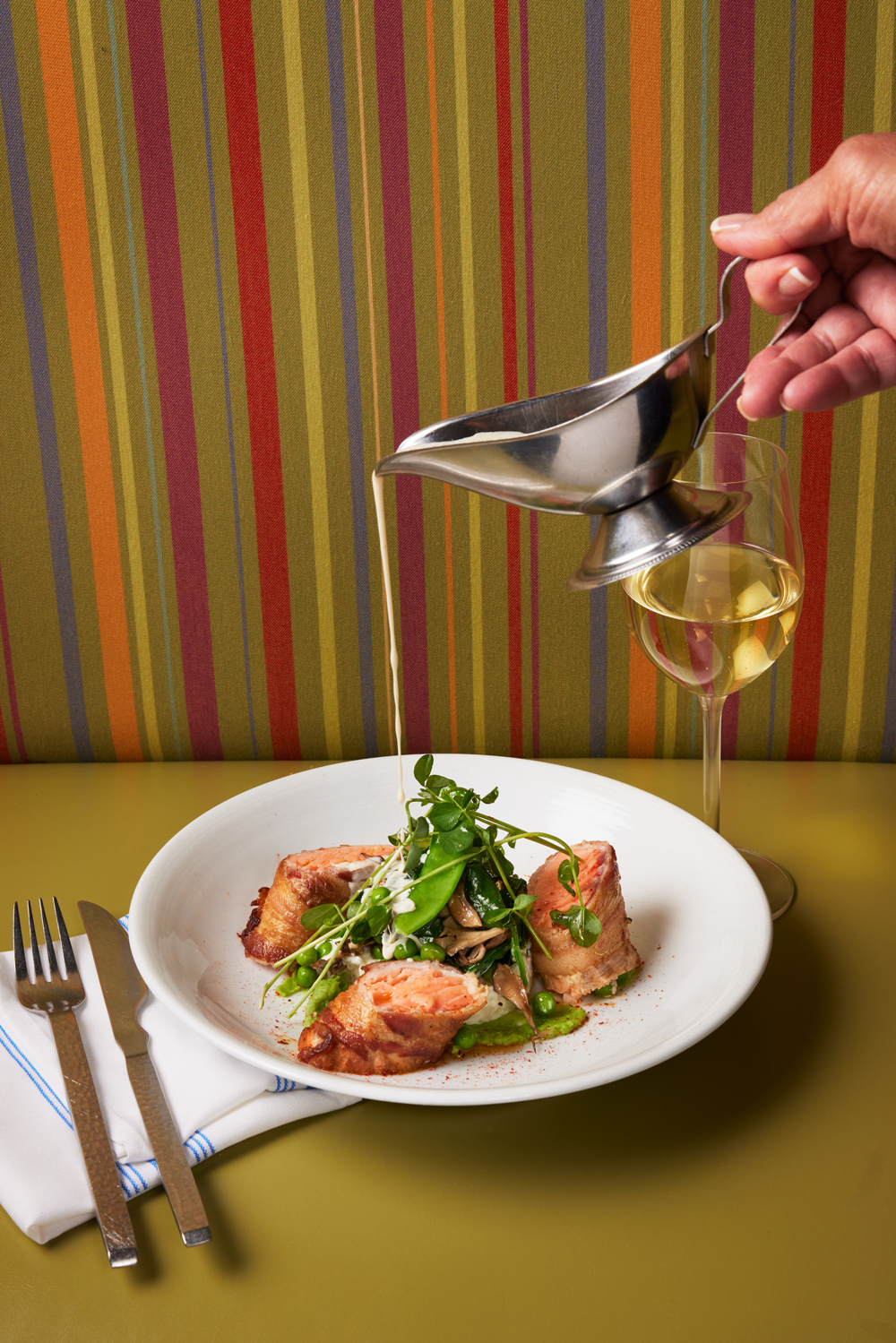 The entrées are soul-warming French comfort food. The “local chicken”—served with soft root vegetables, a decidedly restrained mushroom risotto, and a rosemary wine demi-glace—is a simple dish, exquisitely executed. The juicy chicken’s crisp skin offers a delightful textural contrast to the velvety risotto. This hearty-yet-refined dish encapsulates Le Bar a Boeuf’s raison d’etre: to provide an approachably elevated take on French cooking. De Cavel describes Le Bar a Boeuf as a place where someone can grab a foie gras dish, followed by a cod sandwich or mac and cheese.

The menu, with its focus on restraint and subtlety, reflects a lifetime spent in French kitchens. The most delicious “fruit” of this labor is the crispy duck, starring crispy, fatty duck filets served with goat cheese grits, shiitake mushrooms for additional umami, kale, and a honey bourbon demi-glace. This playful mixture of French and Southern techniques reflects the restaurant’s creativity. And Le Bar a Boeuf doesn’t just play the “greatest hits”; it improvises on them. Case in point, the delicate bacon-wrapped salmon, served over a bright, fragrant saffron orzo. Ditto for the spoonably soft short rib, served with a pungent parsnip puree, instead of a more predictably bland starch.

All of the entrées were excellent, from the peppery steak and frites, with its accompanying harissa mayo for the fries, to the veggie entrée: a creamy-yet-crunchy mac and cheese interspersed with fresh fall vegetables. The server must have known we would love our entrées because she asked “How was your first bite?” as we dove in. In all my years of dining out, I’ve never been asked that. I suppose if I were serving food this good, I would be eager to know, too.

Le Bar a Boeuf has no formal dessert menu, but Pastry Chef Jean-Philippe Solnom offers a selection of weekly dessert specials. The silky crème brûlée, with its glassy caramel shell, is the platonic ideal of the dish. The chocolate mousse, served with chocolate powder and sour, juicy berries is likewise an excellent end to a fine French meal.

While de Cavel says he hopes to reopen Table someday, he’s in no rush to do so. I ask him if Le Bar a Boeuf’s menu will change again if Table reopened. His answer? “Good question. We’ll see.” I confess, I asked the question because I was hoping the restaurant would stay just like it is. But I suppose it doesn’t really matter—that this food exists somewhere nearby is the important thing.