John Young’s Fire in the Field and Other Stories, a collection of 16 short stories that are at once melancholy and heartening, will be published next week by Golden Antelope Press. The Cincinnati writer evokes both the rural Midwest of the late 20th century and the vulnerability of the human experience and, like his novel When the Coin Is in the Air, continues to explore emotional flashpoints with enduring consequences. 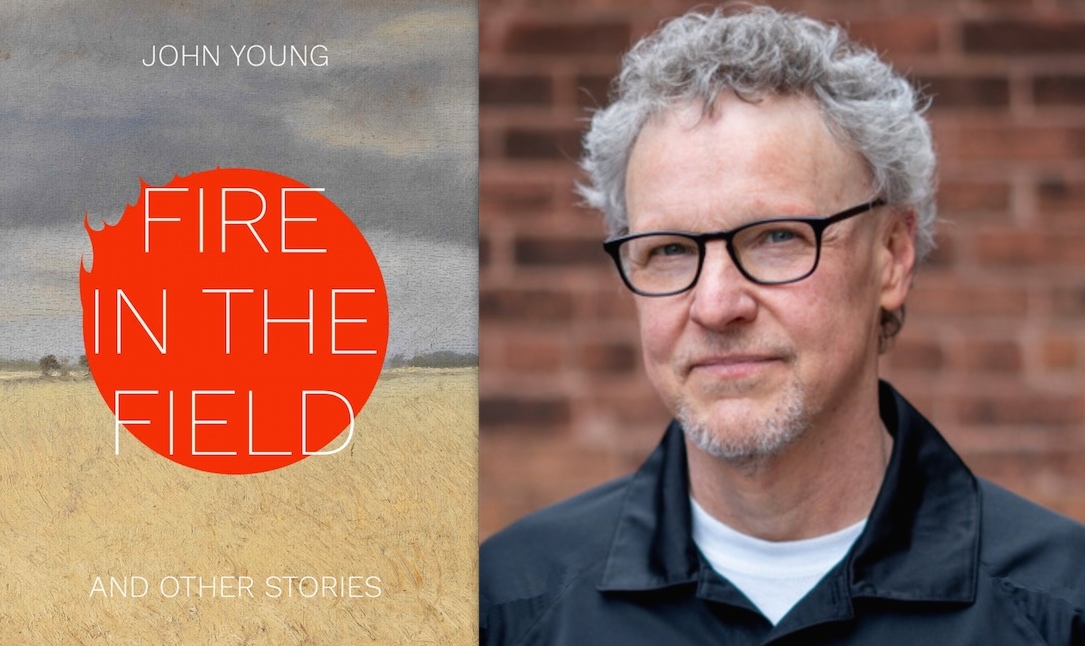 How does the book cover, which your son designed, set the tone for the stories?

The cover features a pastoral field with a blue-gray sky, interrupted by a large red circle in the middle with one edge erupting into flame. The title is in the circle, but the type extends just beyond the edges. To me it suggests that this place is both beautiful and dangerous, while the type extending beyond the circle implies something that can’t quite be contained or easily explained. You know some bad things are going to happen between these covers, but there’s also going to be beauty and gentleness.

Many of the stories feature middle-aged men looking back on the road not traveled, evaluating how their choices compare to their family members, and considering crossing ethical lines. What interests you about middle age?

For many people, it’s a time to reflect on choices made. Regrets and successes bubble to the surface. There’s a sense of ennui that they don’t have enough time left in life to restart and reclaim some old dream. It can cause people to take shortcuts to grab for what they feel like they missed. That creates trouble, and trouble creates drama, and drama is the root of a good story. So that interests me.

You earned an MFA in Boston and spent years in the corporate world, moving to Cincinnati in 2005 to lead the marketing agency Bridge Worldwide (then Possible and Grey Midwest) before transitioning to other roles. What made you want to write fiction again now?

I never lost my interest in fiction writing, which began when I was a freshman in college. I scribbled notes for stories, images, and potential titles while I was working as a copywriter and creative director. When working long days in the executive creative director role, I didn’t have time to write fiction, but I did write some poetry—bad poetry—but it kept my hands in the artistic side of writing.

Writing ad copy or coaching other writers and designers is about crafting words for business. It’s creative and requires great craft, but it isn’t art. Writing literature, which is my aim today, is a work of art. The difference is that I write what I feel compelled to write, some vision I want to share, and I hope it finds an audience. That’s very different from getting hired to write about a computer or shampoo to a very specific audience. At this point in my life, I’m fortunate to be able to focus my energy on the artistic side.

My favorite story is “Finding the Words.” Can you tell us about it?

A single mom struggles to balance mother and father roles. She was a basketball star in a basketball-crazy town, but her son failed to make his high school team. The boy, Cooper, feels like a failure. One day, when he shows up at his after-school job at the local newspaper, he gets pushed into reporting on a basketball game the home team is expected to lose. But they win. It’s a huge victory, and the whole town will read about it. Although the boy struggles to write the game story, he discovers he might be better at writing than playing basketball and gains a sense of self-worth. And he and his mother bond over it, since she sees value in her son’s talent.

I was interested in it because we’re often pushed to do something we may not love or may not be good at. But if we’re open and willing to try new things, we can discover a passion, an interest, or a strength we didn’t know we had. I was a high school football player, for instance, and a drama teacher dragged me into theater, where I found a whole new way to shine and where I learned to love literature. It changed my life. It’s where I found the words. So I can relate to Cooper.

What are you working on now?

Just last month, I signed a deal with Guernica Editions to publish my third book in 2023. It’s a semi-comic novel titled Getting Huge that was inspired by the story “A Pumpkin Summer” in this collection. I’m also at work on a novel, and I hope to finish the first draft this summer. Then I’ll spend about a year rewriting and polishing it.

Fire in the Field and Other Stories will be released on June 15. You can pre-order it now at Joseph-Beth Booksellers.