One crisp winter morning in 1914, William C. Weidling took his Kodak camera along as he walked from his house at 1336 Holman Street in Covington into the nearby Linden Grove Cemetery. A particular array of snow-dusted foliage and bare tree limbs caught his eye, and he snapped a frame. Weidling developed the roll of film a couple of weeks later and was astounded to discover that he’d snapped a photograph of Jesus Christ. 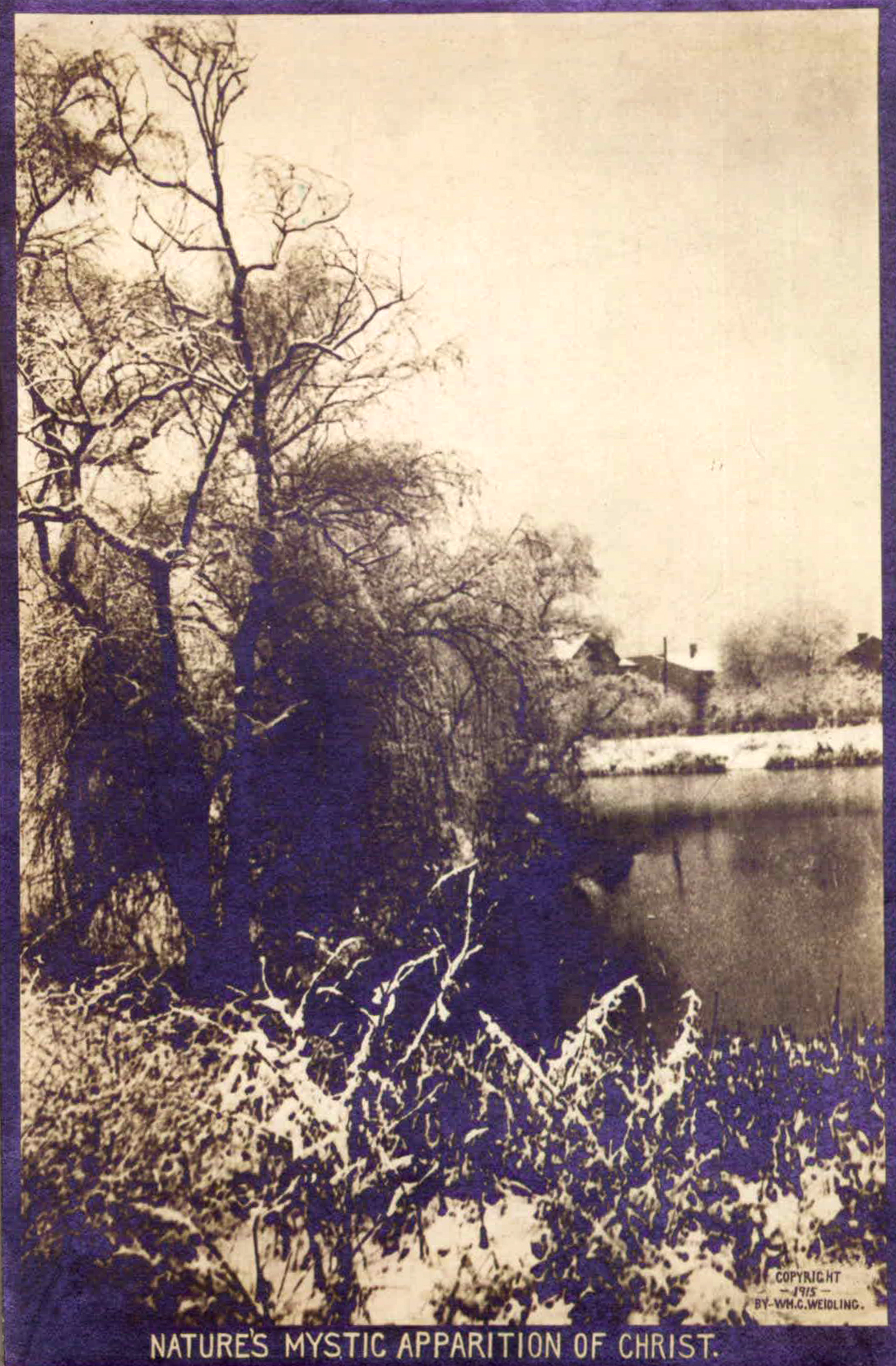 Well, not exactly. Weidling’s photograph included a couple of trees, stripped of leaves, their branches criss-crossing in such a way that the image of Christ appeared to emerge from the seemingly random twigs. It was not Christ himself that Weidling captured in his photograph—it was the forces of nature, marshaling the accidental arrangement of branch and bough to express, he thought, the very essence of Christ.

William C. Weidling (the C stands for “Christian”) knew he had something unique, and so, like all good Americans, he rushed to cash in on his divine windfall. He got the photograph copyrighted; found a publisher in the New York firm of Close, Graham & Scully; and got the imprimatur of the Right Rev. Camillus P. Maes, Bishop of the Roman Catholic Diocese of Covington, to attest that the photo was genuine.

This last precaution is curious, because Weidling wasn’t Catholic. He was born in Germany in 1874, emigrated to the United States in 1890, and married a nice German-Swiss girl in the German Methodist Episcopal Church. Later, he affiliated with the United Brethren Church.

Although Weidling was not a member of his flock, Bishop Maes was effusive in his defense of the miraculous image. In his endorsement, the bishop wrote:

“The upturned face of our Lord glancing sorrowful towards heaven, a head crowned with thorns, the whole shape of the body, all make a most striking picture of Christ, produced by the artless work of nature! We have seen the original film and we can testify that the plate has not in any way been retouched or tampered with.”

Weidling named his unique photograph “Nature’s Mystic Apparition of Christ.” The photo was distributed in three sizes (5-by-7 inches, 7-by-10 inches, and 10-by-14 inches) selling for 25 cents, 50 cents, and $1, respectively.

A trade magazine, Geyer’s Stationer [June 3, 1915] reported that several thousand copies had been sold in Cincinnati alone. According to the Durham (Kansas) Tribune, Weidling was making “a good living” from sales of this photo. If so, his major expenditure appeared to involve moving from Covington to Cheviot.

Weidling spent most of his career as a carpenter, either self-employed or working in the maintenance departments of the Vernon Manor Hotel or the Cincinnati Public Library. In 1912, shortly before he snapped his famous photograph, Weidling incorporated a manufacturing company to produce woodwork and specialty tools for bakers. That initiative, which involved opening a factory in Cheviot, appears to have ended when Weidling was widowed in 1921. With three young children to raise, he found regular hours and a steady paycheck at the library.

Copies of “Nature’s Mystic Apparition of Christ” remained for sale until at least the 1930s, and the image was featured, either in reproduction or description, in newspapers throughout the eastern United States.

A lecturer in Newark, New Jersey, used Weidling’s photograph as the focus of a seminar on biblical prophecy. Copies of the mystic snapshot are now housed in the collection of the Princeton University Art Museum, where it was exhibited as recently as 2012; New York’s Metropolitan Museum of Art; and the British Library in London, where the curators have apparently been led to believe the photo originated in Canada. Even though the image is clearly long out of copyright, several stock photo companies offer it for sale, and it appears as the cover image of The Three Christs of Ypsilanti, a book by Milton Rokeach that’s now been made into a movie starring Richard Gere and Peter Dinklage.

At the age of 80, William C. Weidling died at his home in Norwood after a brief illness. For the last two years of his life, he operated a small fix-it shop.

Weidling never made a career out of photography, hardly published another photograph except a few freelance pix for The Kentucky Post and some church newsletters, and his world-famous photo of Jesus in Linden Grove Cemetery wasn’t even mentioned in his obituary. He is buried next to his wife in Ft. Mitchell’s Highland Cemetery.