Jeremy and Bridget Lieb, veterans of the local restaurant scene, including stints at the legendary Maisonette, long dreamed of opening their own eatery. Two years ago they launched Sacred Beast at 1437 Vine Street in Over-the-Rhine. Their mantra: “Simple Food. Taken Seriously!” Their menu of comfort food prepared with finesse but a minimum of fuss quickly developed a strong following. “We wanted to be who we are,” they say.

The restaurant’s unusual moniker was brainstormed by a naming service from Chicago. “Their first list,” according to Bridget, “sounded like we were a heavy metal band or an IPA.” A second round of ideas produced “Sacred Beast.” That one landed. “It’s edgy and cool,” she says, “but doing this is what we cherish.”

“Doing this,” however, changed dramatically when Ohio closed down restaurants statewide on March 13. Opening Sacred Beast had been difficult, but the shutdown evoked a different set of fears, according to Jeremy. “Now we’re trying to survive,” he says, “doing our best to keep going. We had to change our business model overnight.” That meant laying off all 41 employees. The Liebs now staff the operation themselves, with some part-time help from daughter Hannah, 14, and son Noah, 12. For the balance of March they were open seven days a week, putting in 17 exhausting days in a row.

In April they trimmed back to a more manageable schedule, Tuesday through Saturday, opening at noon and remaining until 7:30 p.m. (“or until we run out,” it says on their website). That gives them Sunday and Monday to pull things together. They’ve evolved in other ways.

“We looked around to see what people needed,” Bridget says, “so we’ve been selling stuff like we’re a grocery store.” Vegetables and fruits, of course, but also cleaning supplies. “It’s like a bodega stocked with products people use daily.” As of April 22, they started assembling vegetable boxes for purchase. Using social media—Facebook, Instagram and Google posts—they promote stories about what’s available. “We can pack things up if people want to place orders,” she explains, “or they can come in and peruse.” They’ve dubbed their service of online food ordering plus groceries the “Beast Mart.”

“We’re still offering comfort food items for carryout,” says Jeremy. “We’re trying to keep our menu understandable but intriguing.” The easily navigated ordering website—which Bridget designed—offers “Every Day” items, such as burgers, a wedge salad, salmon (when it’s available) and chicken parmesan. The latter was not a menu item previously, but its popularity turned it into a daily feature. Jeremy says it’s likely to be a standard item in the future. A few “Hot & Ready” meals serve two or four diners, and an array of daily features (such as a quinoa and chicken bowl) plus side items of potatoes, pork rinds and shoshito peppers round out the menu. It’s also possible to order beer, wine and other drinks to go.

They’ve done their best to hold prices under $15, but Jeremy points out that their supply chain has become more expensive and not as regular as it once was. “We had plenty of salmon one week, but so many people ordered it on Friday that we didn’t have any left for Saturday. No weekend delivery.” The rhythm of orders varies from day to day. “There’s no typical lunch or dinner rushes,” he mentions. “People eat when they’re hungry, and that’s really unpredictable.” An added expense: paper products for food to go. But the Liebs are making it work.

They’re also caring for laid-off employees. “We started giving them prepared food at first,” Jeremy says. “But now we’re trying to give them a check every week. It’s not much, but we’re trying to help.” They’ve also launched “Feed a Beast,” that invites patrons to contribute to a fund to be passed on to those who are out of work.

Looking to the future, the Liebs say no one has a real idea of how things will work. “We’re planning for more sanitation practices,” Jeremy says. “We’re going to print disposable menus. We won’t pre-set tables. It’s hard to run a business like that and sustain it, but we’re going to bob and weave.” He’s been checking research about restaurants in Asia that have adjusted post-pandemic, and he’s watching how casinos in Las Vegas will handle crowds. “All our local restaurants have banded together, and we’re talking to one another,” he adds.

Jeremy and Bridget say their Vine Street space is large, “so we can experiment with seating people.” Some tables might serve as spacers between seating locations.

Despite the challenges, the Liebs remain upbeat and grateful for the community’s generosity. “People we know have been so kind,” Bridget says, “so charitable. We’ve received letters of congratulations and love.”

“We’re doing our best to be open and to do stuff for our staff and diners,” says Jeremy. “We’re not going to give up. We’re focused on having a positive attitude and staying happy.”

Contribute to Feed the Frontlines, which provides meals to local healthcare workers.

Plan to eat at Sacred Beast, either outdoors or when indoor dining reopens on May 29.

Author Rick Pender is a Cincinnati journalist, which includes work at CityBeat and WVXU, and author of 100 Things to Do in Cincinnati Before You Die. He lived in Over-the-Rhine until very recently, and is eager to return and enjoy restaurants, theater and other arts performances there.

OTR in Action is a series of stories from local creative writers with strong ties to Over-the-Rhine. The OTR Chamber paired them with neighborhood businesses to share the wisdom and passion of small business owners who have planted themselves in Over-the-Rhine. 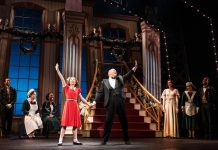 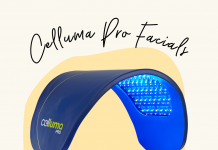 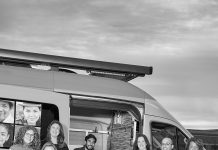