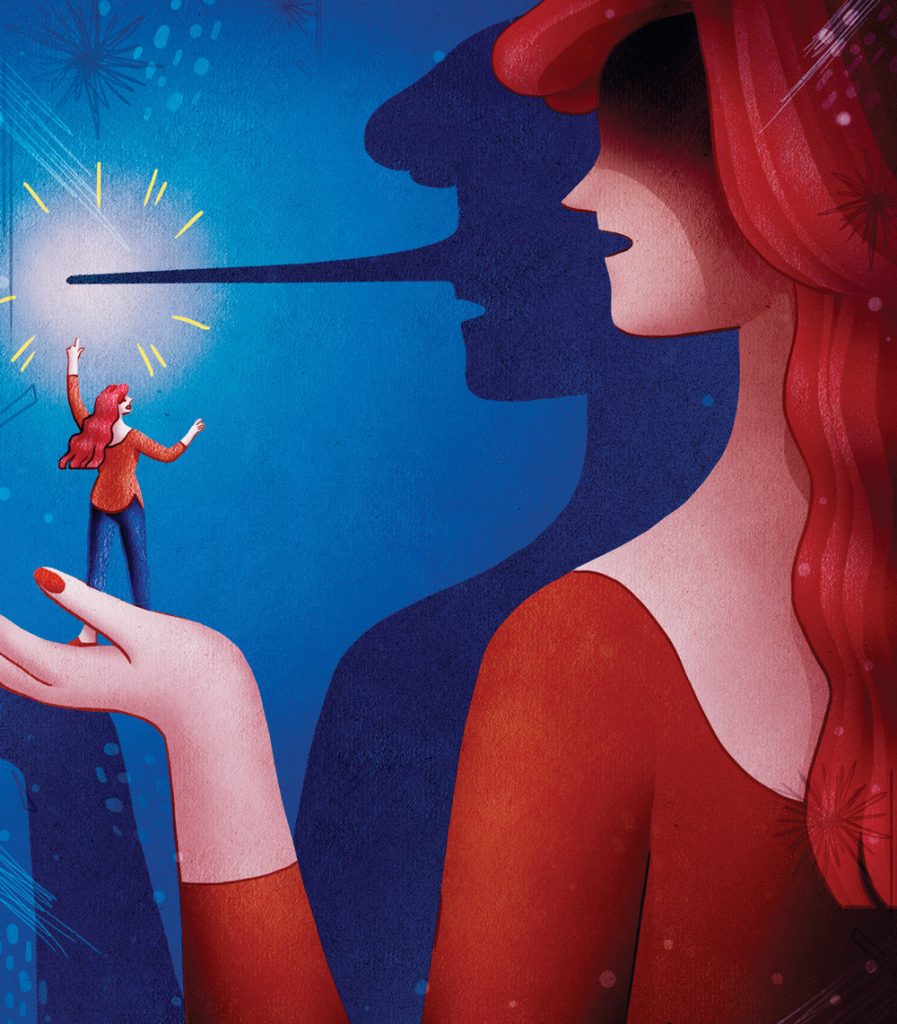 I was recently having a conversation with my sister Nancy. She’s probably the funniest Ketteler. Our oldest brother, Herb, is in the running, too (there are seven of us). Nancy gets animated, and it’s something to see. She clenches her teeth when she’s angry, just like our dad used to, and pounds her fists on tables the way he did when he was trying to make a point.

I could see her teeth clenching and her fists balling at her sides. I don’t remember exactly what we were talking about, other than it was some lie that politicians were spinning. “It’s like truth doesn’t matter anymore!” she yelled in frustration. Bam! went the fists on the kitchen table.

I felt her pain. I once had these same thoughts about truth not mattering anymore and the speed with which lies can spread on social media. I felt like I was becoming powerless in a world of lies. In fact, a little over two years ago, I arrived at a bit of a crisis moment regarding truth. It happened because this scrappy little thought kept buzzing around me: You know Donald Trump is dishonest, but how honest are you, Judi? I was like a running back, trying to juke around it, the way I’ve seen my kid do when he’s trying to get down the football field with the ball. But it was persistent and waited for me with every dodge. Really, are you an honest person?

I looked around at my life. I was the mother of two wonderful kids who were the most important thing in the world to me, yet I did a pretty bad job answering many of their questions honestly. I was a writer committed to vulnerability, yet I often struggled to be forthright with people. I was a daughter, sister, friend, and neighbor who believed in generosity of spirit and open communication, yet I held on to judgment. I was an active user of Facebook and Instagram, with a smiling profile and carefully curated bank of mobile uploads and pithy posts, yet I often didn’t recognize myself in them.

After surveying the honesty landscape of my life and finding it lacking, I did something not like me at all: I went quiet. It was the only way I could think to notice my own lies instead of getting caught up in everyone else’s.

All is not lost, truth matters, and honesty can improve your life in striking ways.

I started an honesty journal, where I wrote down every single choice I made throughout the day regarding honesty. The first day was a doozy. I told partial truths, skated the truth, and caught myself ready to say something that wasn’t quite true about a dozen times. I quickly realized I was on to something and began writing the book, Would I Lie to You? The Amazing Power of Being Honest in a World That Lies (it comes out this month).

If you’re walking around with sky-high blood pressure and a jaw firmly clenched in rage, I’ll just share the upshot now: All is not lost, truth matters, and honesty can improve your life in striking ways. Yay! Still, when it comes to screaming at the liars and the cheats, you’re going to have to do a very counterintuitive thing: Shut up. I’m not saying mute your anger at injustice or stop fighting for equity, transparency, and science. I’m not saying go underground or abandon all the good work you’re doing. What I am saying is Stop talking about everyone else who is lying just long enough to understand your own relationship with honesty.

Do you remember the first lie you told? The furthest back I can trace is second grade, when I lied to the priest during confession. He was behind the screen, and at first I felt part of something important. But when it was time to confess my sins, there was no way I was going to tell him that I touched myself “down there” (listed as an official sin in our religion book). I muttered some made-up stuff about fighting with my brother.

The guilt lodged in me like a tiny steel ball bearing. But it didn’t stop me from lying again. And again. Because children lie to navigate social situations and to avoid shame and embarrassment. You know others are lying to you, even as you’re lying. It’s a tug of war between frustration at others’ lies and guilt about your own. Not to mention the times you get in trouble for telling the truth, like when you informed your grandmother that you didn’t particularly like the scarf she gave you.

This was the stew in which I simmered. It’s probably typical childhood stew—sub in your own religion and/or moral teachings—but it’s mucky and thick and weird, and no kid emerges without some suspect ideas about honesty.

It turns out that while human beings are unwavering in our demands for honesty and rather unforgiving of dishonesty, we are super bad at (1) talking about honesty without relying on clichés like “Honesty is the best policy,” and (2) noticing much of our own behavior around honesty. It was only when I started tracing my honesty choices throughout my life—both the little lies of kindness and ego-based lies, as well as contradictions like believing deeply in the golden rule while passing judgment on everyone around me—that I saw how much I had missed.

So I started wondering all kinds of things. When was I paltering (saying true statements for the purpose of deceiving)? When was I uttering unexamined statements? Why did kind lies, which researchers call prosocial lies, sometimes feel moral and good? Were there rules around these kinds of lies, and how could I explain them to my kids? What was I supposed to do when my kid asked what “squirting” was, and I knew that if I didn’t tell him he’d just go look it up online? Was I going to abdicate and let Siri be in charge of sex education? Why was it so hard to be direct with people, both people I loved and people I was only acquainted with?

And, of course, the big question: What lies was I telling myself?

After prodding around in these questions and interviewing dozens of social science and behavior experts, I came to realize that the journey isn’t actually about being a more honest person, because honesty isn’t always the most important value. Rather, the journey is about being a person who’s more engaged with honesty and pays closer attention to her choices.

Let’s say a colleague is about to give a presentation and you’re not overly confident in his abilities. He asks you right before he heads to the podium, “Do you think I have this?” There is nothing helpful in being honest and saying, “No, I don’t think you’ll do well.” Now, if it was two hours before, when there was still time to make improvements, you could say something like, “Well, how about if I help you refine some of your points?” But honesty in a moment when it will only be hurtful is self-serving.

You want honesty to matter? Make it matter to you. Be angry. Be vigilant. Protest and hold people accountable. Absolutely. But all along, keep saying, “I’ll start with me.”

Values like kindness and uplifting someone often matter more than a direct truth. But people don’t like to talk about deception in a positive way. We elevate honesty as this nonnegotiable thing, and then we proceed to lie all the time. The cognitive dissonance of that makes us a little more jaded, a little more suspicious, and a little less aligned with who we want to be. It’s such a missed opportunity, too, because you can learn so much about yourself by noticing your prosocial fibs and fails.

For example, I was swimming laps at the YMCA pool when I almost collided with an older man who snuck into my lane unannounced. When I explained the etiquette to him, I could tell he was embarrassed, so I quickly said that I’d done the same thing the first time I had to share a lane (a lie). He brightened and felt less stupid. It was an excellent reason to lie. Later that week, though, I failed to be honest with someone who needed my feedback to improve a process because I was afraid of hurting his feelings. My empathy had turned to fear of standing inside an uncomfortable space, which is not a good reason to lie. (I found the courage to be honest with him the next day.)

I can’t tell you how much it improves relationships when you pay attention to what is motivating your honesty choices, whether it’s empathy, ego, self-interest, compassion, fear, or some other previously unnamed emotion. And when you tell people that you’re doing this—trying to pay attention to honesty—it rubs off on them and they start to pay attention, too. I saw this reaction over and over with friends, family members, colleagues, and even my kids. The fact that my kids know I’m going to try to answer their questions as honestly as possible has opened up dialogue we wouldn’t have had before. Quite simply, there is a ripple effect of people caring more.

There is incredible power in saying, “I’ll start with me.” Eddie Glaude Jr., professor of African-American Studies at Princeton University, has the most compelling three-minute speech about this topic I’ve ever seen (he was on MSNBC). In addressing why racist- and xenophobic-inspired violence keeps happening, he makes the point that so many people want to put it all on Trump. “If we’re going to get past this, we can’t blame it on him,” says Glaude. “He’s a manifestation of the ugliness that’s in us.” Then he says, “This. Is. Us!” staccato clapping his hands, much like pounding of fists. This. Is. Us.

You want honesty to matter? Make it matter to you. Be angry. Be vigilant. Protest and hold people accountable. Absolutely. But all along, keep saying, “I’ll start with me.”