Home Perspectives How Books and Cats Helped Me Figure Out Who I Was Meant...

My favorite childhood book disappeared when I was about 10. It was around the same time we took in a stray cat, who was with us for only a few years before he died from injuries related to getting in a fight or being hit by a car.

The book, which I never remember having a cover, contained six or eight little stories, my favorite of which featured a character also named Judy who liked to have tea parties for her dolls. Since I did the same with my stuffed animals when I was 4 or 5, I would beg my mom to read the story over and over again. As for the cat, my teenage sisters hid him in the garage for a day at the beginning, until they felt ready to convince my dad that we should keep him. I still don’t know how they managed it, because “No pets” had always been his rule. A friendly orange and white tabby with a crooked tail, his personality must have won over my parents. My sisters named him Harrison, after Harrison Ford.

Both were precious to me, and then gone. This is the stuff of being 10. You experience loss. Childhood slips away in a bag your mom donates. It wasn’t exactly scarring, but it dropped a pin in my emotional landscape.

Cumberland, the black cat another of my sisters brought home from a camping trip to Cumberland Falls, was the first audience for my teenage poetry of the late 1980s. He would stretch out on my bed as I knelt on the thick white carpet of my bedroom, my poetry books spread around me. Sitting with Emily Dickinson, e.e. cummings, and Gwendolyn Brooks, I crafted very bad verse, with some lines that were probably decent here and there. Cumberland would yawn and reach a paw toward me. One blink for I love you. Two blinks for Your poem is great. Or maybe all the blinks were saying I don’t care. He was as silky as he was ambivalent, but I needed to say things, and simply being in the presence of a nonjudgmental body was everything.

By this point, I was a cat person. But in 1996, when I moved up the road to Oxford for graduate school, pets weren’t allowed in my apartment complex. I’d lived at home during my undergraduate years at NKU, so this was my first experience of living alone. Though I relished my new independence, I was lonely and could have really used a furry little someone. I was having trouble finding my place in the program among all the outsized egos. While I didn’t doubt my intelligence or the voracity of my ideas, I still felt dim. I would stare at the dark wood paneling of my cheap apartment, feeling like my writing work was disconnected from everyday people and the actual beauty of language.

A few weeks into my new life there, I made a friend named Bret. He was a skateboarder and fiction writer from Corpus Christi, Texas. He was far away from home and, I suspected, a bit lonely too. He was quirky and completely lacking pretension. With friendly brown eyes and dark curly hair that he almost always wore a hat over, he was easy to talk to.

I had a crush on him but was far too shy to do anything about it, so I was mostly content to just have friendship. In December of that first year, he gave me an essay he wrote, titled “Our Cats.” It was about how his mom fed stray cats and always wound up getting attached to them. About how his father quietly disposed of the poor cats when they met an untimely end. About how his mother fell apart when his dad died suddenly. About how the only thing that eventually got her out of bed was nursing one of the cats back to health. And about how, on the phone, he and his mother now talked about “their cats,” including the stray that Bret had recently started feeding outside his apartment.

As I held his three stapled pages (which I’ve kept all these years), I was struck by the simplicity and punch of his writing. Reading it, I felt incandescent, lit up. I had forgotten that a sentence could shatter me. In all of my timidity and annoyance with the people who loved to hear themselves talk, I temporarily misplaced the thing I thought I’d never lose: my love of words. But those cats. They found me again, even when they weren’t mine.

Of course, I expressed none of this to Bret, other than to tell him I loved his piece. He would go on to become acclaimed novelist Bret Anthony Johnston, and I would go on to build a good life. But it wouldn’t be the last time a cat led me back to something I had misplaced.

The first time I went into The Bookshelf, the small independent bookstore in my Madeira neighborhood, I think my cat, Seattle, was still alive. Or maybe he’d already passed on; he died in 2016, and I can’t remember the year of my first visit. Either way, his era was over. I had gotten him in 1999, and because he was the same lush gray color I imagined the city to be, I had named him Seattle. I’d never been to Seattle—or been much of anywhere, truthfully—but the notion of being able to travel and have new experiences was intensely exciting to me. I was young and single with no thought of having children, and his name represented the next stage in my life.

By 2016, though, that stage of new skylines and new sex and new milestones was over, and my 5-year-old daughter really wanted the latest installment in The Princess in Black book series. It was on a whim that I even went into The Bookshelf. I normally shopped (guiltily) on Amazon, but I was in a mood to try something different. As I walked into that tiny but happy space packed with books, everything I loved about bookstores came flooding back: the smell, the soft sliding sound it makes when you shelve a book, the way it feels to carry the possibility of a book around while you browse.

In the decade I had lived in Madeira with the gray kitty left over from my youth, I’d ignored one of the city’s last independent bookstores. As a book person, I couldn’t figure out why. Actually, there was so much about myself I couldn’t figure out, starting with the feeling that I wasn’t in the right place with my marriage. I had gotten married at 34 to someone I’d been dating for five years, and then we had two children quickly. It’s not that I had wanderlust to travel the world, but I wondered why I’d chosen this person and this life out of all the people and all the lives that seemed possible when I first plucked Seattle from that shelter.

The next few years would be outwardly great but mildly terrible inside. I would continue, of course, to buy books on Amazon. But I made it a point to keep buying books at The Bookshelf, too—every fourth or fifth one—as well as birthday, Christmas, and kid presents. Every time I made it into the store, it felt like a victory, like a small nudge back to something. I watched my children transform from little kids into tweens. They joined sports teams. They found community. They rooted themselves. Slowly—and I mean slowly—I stopped looking around for everything else I could be doing and everywhere else I could be and everyone else I could have chosen that maybe would have represented an easier life.

Of course, a cat had to come along just to make the point, in case I still wasn’t getting it. In November 2018, I was mindlessly scrolling on Facebook when I saw a “Cat needs home” post on a neighborhood page. I don’t know what it was about this cat. I kept saying it was her sweet little face that drew me in, and it was. But it was also her story. She was about a year old and had most likely been someone’s pet (because she was spayed). But she had either been dumped or was hopelessly lost, because for weeks she was wondering around on a Madeira street a mile or so from where I lived. The neighbors took turns feeding her and tried everything they could to find her owners, which went on until a woman who fosters cats took her in, the post said.

My husband, who had never been thrilled to inherit Seattle in the marriage, said “No more cats!” when Seattle passed. But when I showed him the Facebook post, for reasons I still don’t understand, he said we should get her. Her name, the post said, was Madeira.

I didn’t connect anything to her name until the day I brought her home from the pet adoption event a week later. I didn’t even think about how Seattle’s name represented all of the wandering I once did and this cat had spent a little chunk of her life wandering around right here in this city, desperately looking for home, not unlike what I’d been doing emotionally. I don’t know if my cat found me or I found her, but I know that neither one of us is looking around anymore. 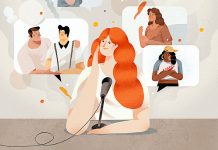