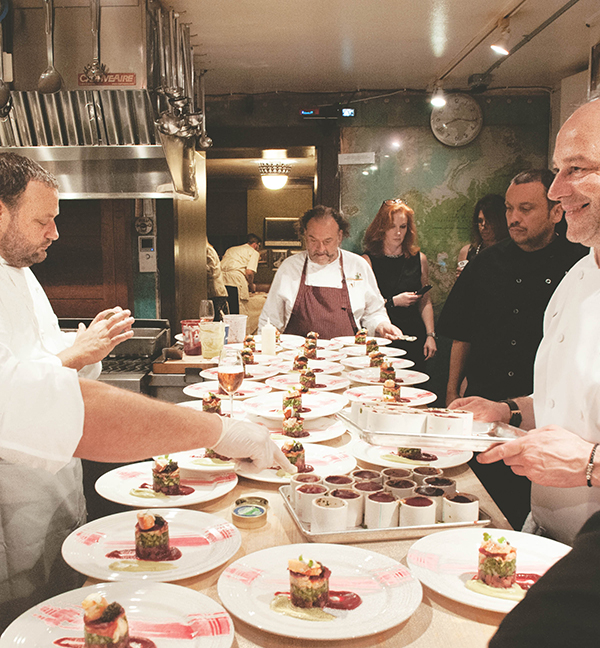 When James Beard died in 1985, Julia Child insisted that the culinary community do something with his house. As a cooking school proprietor, author of more than 20 cookbooks, and respected arbiter and mentor, Beard had entertained many from the burgeoning American food scene there, making it a natural home for a foundation that would promote the culinary arts. Being asked to cook a dinner at the Greenwich Village headquarters has become one of the highest honors for a chef. When Jean-Robert de Cavel was invited back (for his sixth time) in May as part of the Cincy in NYC arts trip, he decided to share the glory with seven fellow Cincinnati chefs: David Falk of Boca, Stephen Williams of Bouquet, Julie Francis of Nectar, Jean-Philippe Solnom of French Crust Café, David Cook of Daveed’s Next, Jeremy Lieb of Boca, and Jose Salazar of Salazar. Lucky me, I got to tag along, pitching in where I could in the kitchen. Between stuffing snails and peeling fava beans, I also took a few notes. This is how the dinner went down.

9 a.m.
A gray rental SUV packed with coffin-sized coolers stocked with quail eggs, foie gras, chocolate mousse, and French macarons pulls up in front of the Beard House on West 12th Street. Still recovering from an extravagant (read: boozy) dinner the night before at Gramercy Tavern, the chefs pile out of hired town cars and unpack wordlessly. They’ve got roughly eight hours to turn these raw materials into an elegant seven-course dinner.

9:30 a.m.
After powering up with a few cups of coffee, de Cavel begins hollowing out fingerling potatoes for his canapé dish. Solnom discovers that ice water in the coolers leaked into his strawberry macaron shells, despite being stored in an airtight container and quadruple-wrapped in plastic film. He quickly rethinks his plating strategy.

11:15 a.m.
A crew from WCPO-Channel 9 shows up to do a segment about the event. “Tonight we’re going to show the people of New York City that they ought to be coming to Cincinnati for dinner,” says Cook. His colleagues, who are peeling and chopping quietly around him, have a good laugh.

11:30 a.m.
Salazar got to the city a few days earlier and has done much of his prep at Montmartre, a French restaurant run by a friend in Chelsea. He unpacks his supplies next to Williams, who is slicing cucumbers on a mandoline. On a shelf near them, a small, antiquated boom box set to a classic rock station is blasting John Mellencamp’s “Small Town.”

1:30 p.m.
Lunch break! A quick walk around the corner brings the crew to The Spotted Pig, April Bloomfield’s nose-to-tail temple, where they share bottles of ice-cold rosé and dig into chicken liver toast, braised pork face, and pickled herring filets (called “roll-mops”). Despite much protest, Williams generously picks up the tab.

4 p.m.
After lunch, the chefs start gearing up for the service. The tables are set in the upstairs dining room. The wait staff is briefed by de Cavel on the menu and the chefs are warned that guests will walk through the extremely tight kitchen on the way to their seats.

6 p.m.
Canapés are being assembled. De Cavel will serve an escargot stuffed fingerling potato, and Cook a foie gras torchon with apricot (above). Williams has prepared some Kentucky charcuterie (saucisson on quick pickled cucumber slices), while Lieb and Falk finish a croque madame with Mangalista ham and Comté fonduta. Francis’s sweetbread, Kentucky ham, and apple canapé is skewered, and Salazar will shuck oysters to order, topping them with pineapple and cilantro.

6:15 p.m.
Francis (above) begins searing her Marksbury Farm racks of lamb on the small, professional grade gas range. Despite the harried pace, she is totally unflappable. The hood system? Not so much. It struggles to keep up and the room quickly fills with smoke and the rich scent of rendering lamb fat. De Cavel and Solnom (wearing beet-stained latex gloves) assemble lobster salads in white PVC rings. Every spare surface, with the exception of the butcher-block counter, is covered with food containers, squirt bottles, even a gurgling sous vide machine.

7 p.m.
As guests make their way through the kitchen, perfume mingles with the meaty scent of lamb, mushrooms, and goose goetta. Two of the chefs openly admire a few of the well-dressed younger ladies, until they are reminded that the “kitchen cam,” a live video feed of the action in the tiny prep kitchen, is also wired for sound. Big laughs! Salazar, hunched over a tiny work station in a quiet corner, shucks one oyster after another, oblivious.

7:30 p.m.
The final count for dinner is confirmed at 71. As the chefs wait for the service to begin, Salazar, Francis, and Lieb are almost pensive, while Falk, Cook, and de Cavel tease each other with inside jokes. A few sip champagne from paper cups. A waiter rushes in to discuss a last-minute change due to a nut allergy—a challenge for Williams’s pistachio-crusted halibut.

7:40 p.m.
Go time. Francis, Falk, and Williams each grab a component of Salazar’s fluke crudo dish—green strawberries, spring vegetables, and a verjus and yuzu gelée—and begin an assembly line plate-up. Meanwhile, de Cavel and Solnom carry on a barely audible conversation in French while they paint a beet reduction and spoon avocado mousse onto plates for the lobster salad.

8:05 p.m.
Salazar lets out a sigh of relief as the waiters spirit the last of his fluke crudo into the dining room, then jumps in to assist de Cavel. A flurry of reaching, spooning, wiping, and garnishing commences. The salads are unmolded and finished with lobster claws, lemon crème fraîche, and a generous spoonful of the Kentucky-based Big Fish Farms caviar. As the salads leave the kitchen, Falk, who earlier declared his ardent love for caviar, whisks the last fish eggs from the tins with his index finger. “Don’t worry,” de Cavel tells the others, “I set aside a few extra tins for us afterwards.”

8:25 p.m.
Falk walks the team through the plating of his complex appetizer. Finely diced fava beans and cooked guanciale will go in the bottom of each delicate china cup. Cook (left) adds three to four robiola cheese-stuffed cappelletti while Salazar, using an automatic chinois, releases the piping-hot brodo over the pasta. Williams applies the brown butter sabayon, kept stable in nitrous-fueled chargers. Francis tops each dish with bacon and finely shredded Parmigiano-Reggiano. De Cavel grinds a twist or two of fresh pepper over each cup before a waiter places them onto a doily-lined saucer for delivery.

8:55 p.m.
Williams’s halibut plate is up. Solnom lays down the pickled rhubarb and mushroom mixture while Falk nestles the fennel and edamame medley up against it. Williams and Lieb linger at the ovens, monitoring the doneness of each five-ounce cube of pistachio-crusted halibut. Francis silently drizzles a ginger soy reduction around the plates as a waiter calls out for the nut-free fish. Each plate is garnished with microgreens. On the back line, Cook gears up for his course, a duck breast with goose goetta, while Falk opens a Coors Light from a secret stash.

9:15 p.m.
Cook’s hickory smoked duck breast, cut into thick planks over a crispy slab of goose goetta, heads out into the dining room. The plate is minimalist, save for the decorative sauces of green and white ramp coulis, a red wine reduction, and a few rings of pickled shallot.

9:45 p.m.
Francis quietly begins to direct the plating of her Mediterranean-inspired lamb entrée. Large swoops of ful, a fava bean purée, anchor the dish. A double chop is flanked by sautéed morels and asparagus spears. Meyer lemon and a few dots of harissa finish the presentation. Once the last plate leaves the kitchen, champagne corks pop. Salazar pours flutes for everyone while Lieb steps out to a nearby bodega for a case of Rolling Rock. Meanwhile, Solnom has been preparing his intricate dessert plates in the lobby for the last 20 minutes, using every available surface.

10:20 p.m.
Strawberry sorbet, sweet yet soft, inspires urgency in the wait staff. Chocolate and strawberry-vanilla macarons and a molded, hazelnut mousse-filled chocolate—which at first glance appears to be a fresh strawberry—round out the precisely prepared assortment. Lunch was nine hours ago, so Salazar pops the remaining oysters and adds the verjus and yuzu gelée from his fluke dish, along with small spoonfuls of caviar, for a luxe end-of-service snack.

10:45 p.m.
De Cavel tops off everyone’s champagne and leads them up the back staircase to the dining room for a toast to the chefs, the staff of the James Beard Foundation, and the guests. Then he reminds them not to forget the take-home boxes of artisanal chocolates created by Solnom. Finis.