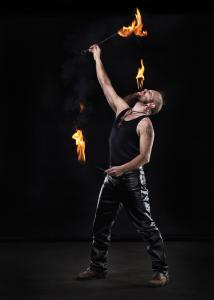 It doesn’t hurt if you’re doing it right. It’s really more guts than anything. It’s technique. It’s getting over your fear, which is a great lesson for everybody.

It’s me and six women [in the troupe]. I was always the bad guy. They have poisoned me, tied me to a chair, ripped my soul out, bludgeoned me to death…

I went to a New Year’s party in Texas in 2000 and some Burning Man burners came out to perform. That was the first time I ever saw anybody breathe fire in person.

I’ve worked some big bonfires at festivals wearing full gear. I’ve got a wet bandanna on my mouth and my hat pulled down and I’ll go in there with a long metal pole to shift logs and, at that moment, you have to think, “OK, when I open this aperture and change that mixture and let some extra air in, that fire might say, ‘You know, where he’s standing is a great place for me to be right now.’ ”

Once you realize fire is something you can manipulate but not control—you can’t control it, it doesn’t do the same thing twice—you can’t be afraid of it. If you’re afraid of it, you can’t get in the flow.

Gauge your wind. The easiest way to get hurt is to get blowback, or if the flame goes back in your face or in your mouth.

I’m working with carcinogenic fuels. There’s a chance that at some point I’ll either get burned or I’ll aspirate fuel. It’s like I’ve just kind of chosen the way I’m going to die.

I think with anything where you push yourself, you learn that you’re capable of so much more.

Professionals Only
Fuels used in fire arts—especially breathing—are specially formulated to have high flash points. Anyone who looks to breathe or eat fire using liquor with high proof, Ferguson says, “is a fool.”

Burning Down the Corporate Ladder
After losing a corporate job, Ferguson found himself with sudden freedom to capitalize on his creative talents. He now makes and sells jewelry, creates his own tools, does leather work, carpentry, produces props for use in shows, and performs in Dante’s Gypsy Circus.

Audience Participation
“Some of the best moments have been when somebody has yelled something out at me during the show,” he says. “There’s nothing worse than playing to an audience that’s just sitting there.”

Networking
Ferguson participates in Kinetic Fire, a four-day workshop in College Corner, Ohio, that attracts dozens of fire performers who work on improving their craft.