For Travis Maier, the decision to take on the role of program director for the Findlay Culinary Training Program was a no-brainer. He’d learned of the initiative during his days as culinary director for Jeff Ruby Culinary Entertainment, and after finding out more about the significance of their mission, he eventually made the move to work with the nonprofit.

“I just started to feel this urge to want to go and do something good,” Maier says. “It’s so incredible how [the program] can bring people in that want to do better for themselves and give them all the tools.”

The initiative is a collaboration between Findlay Market and CityLink Center, whose goal is to offer a helping hand to the unemployed and poverty-stricken. Over the course of 13 weeks, participants spend the first four weeks training at the CityLink facility working with a professional chef before beginning a nine-week paid internship at an area restaurant.

Students spend their days learning the fundamentals of cooking, how to work efficiently in a kitchen, and other life skills such as money management and completing interviews successfully. They are trained and empowered to jumpstart their own professional careers in the world of fine dining and are provided a path to making positive life changes, all at no cost as CityLink’s services are funded by donations. The individual income of program graduates who end up with a job in the industry rises by more than $17,000 on average, and many end up in some of Cincinnati’s best restaurants.

“If you can skill up in a relatively short period of time, which is what CityLink offers, you can get the skills you need to where you walk into an interview confidently and say, ‘I actually know that I’m worth a living wage,’” Maier says.

This rang especially true to Ricky Denny, a program graduate and current sous chef at Maize, a Latin American restaurant in Over-the-Rhine. He joined the program at the recommendation of a friend after being incarcerated and going through the struggles of addiction and poverty. He says that by the time he left, he felt as if they were a family and a healthy support system. 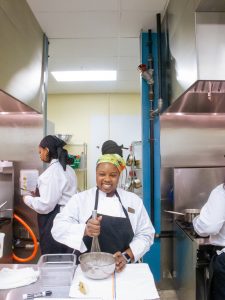 “If you’re willing to do the things that it takes to get there, then they’ll help you get where you need to go,” Denny adds. “Findlay Culinary has been a blessing to me. They literally set a firm foundation for my future. They literally bridge the gap from poverty to success.”

Last year, classes were suspended in the wake of the pandemic and as restaurants throughout the city made decisions to close down or let staff go. As the city began to emerge from lockdown, CityLink started reaching out to local eateries, recognizing that there would soon be a need to hire kitchen staff once more.

“We reengaged with all of the students that were in the program pre-pandemic,” Maier says. “All of them were interested in coming back for a refresher.”

Classes resumed on July 6, and in September, participants will begin training for the opening of their new restaurant, Mighty Good: Meat & Three, in October. The Elm Street eatery will be predominantly run by the students themselves, featuring an array of Southern cuisine inspired by family recipes and cozy home cooking.

“This restaurant will be informed by people that generally don’t have a voice and I think that they deserve one,” Maier explains. “It’s going to be really cool to see.”