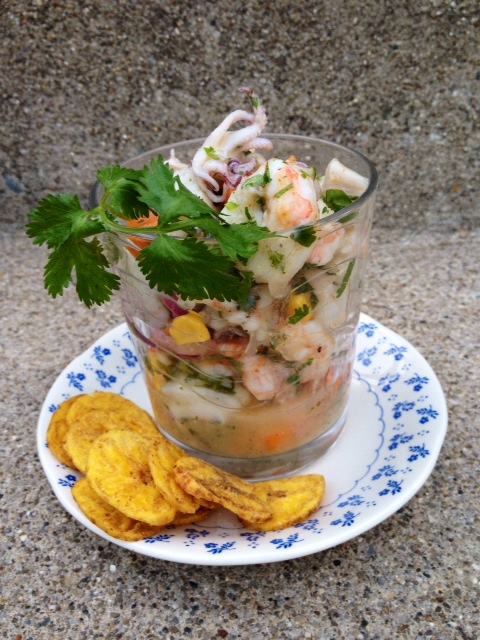 Nothing says dog days of summer quite like ceviche. The bright flavors of lime, ginger, and garlic mingle with fish, shellfish, and chiles in a Peruvian cocktail-concoction that makes heat sources decidedly extraneous. Imagine my thrill when I discovered a new cookbook, Ceviche, devoted almost entirely to the dish, along with a few extra recipes, primarily seafood, that illustrate Peruvian cuisine’s well-deserved place in the outdoor entertaining pantheon.

This past weekend I whipped up a batch of the Alianza Lima ceviche, named for the beloved Peruvian soccer club and so-called because of the various seafood elements (squid, shrimp, and white fish—I used tilapia) that play so well together in this dish. Blanched sweet potato cubes, fresh corn kernels, red onion slices, and minced cilantro round it out. The shrimp and squid are par-cooked and then added to the diced, raw fish.

The seafood is then “cooked” by the acid in the tiger’s milk. (Cool name, right?) Tiger’s milk is a marinade made from citrus juice, salt, and chile peppers, that often includes ginger, garlic, cilantro, and small, raw scraps of the ceviche fish. The ingredients are pureed in a blender and then used to dress the seafood. The remaining vegetables (in this case, sweet potatoes, onion, and corn) are added just before serving.

Pro tip: Peruvians typically make a double or triple batch of the tiger’s milk as it’s often drunk as a shot on the side or used as a component in other refreshing drinks. Insiders swear it’s the ultimate hangover cure, while others contend that it’s an aphrodisiac. While the hard science is still out on both, I’m happily conducting my own experiments. I’ll keep you posted.