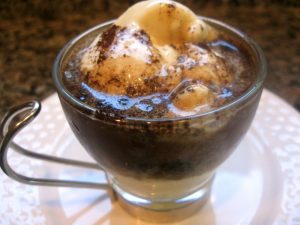 I discovered this recipe several years ago in The Classic Italian Cookbook by Marcella Hazan and have been crazy for it since that first unexpected burst of flavor. Literally translated to “chimney sweep’s ice cream” Gelato Spazzacamino consists of just three ingredients: vanilla ice cream or gelato, scotch whiskey, and ground espresso. The sweet and bitter flavor profile and the contrasting temperatures of whiskey heat and cold cream is as exciting as it luxurious. In fact, it is so unique and so worthy of more attention that it would be great to see it offered locally, at trattorias such as Boca or A Tavola.

Like all recipes that rely on a just a few ingredients, they should be of the highest quality possible. I make my own vanilla bean ice cream, but I’ve used both Dojo Gelato’s and Madisono’s fantastic vanilla gelatos with equally great results.

Dust ice cream scoop with espresso and pour scotch over both. Enjoy!

(adapted from The Classic Italian Cookbook by Marcella Hazan)