Home News Back from the Dead

The Emery Theatre is a beautiful, hot mess: The lights come on but the electricity 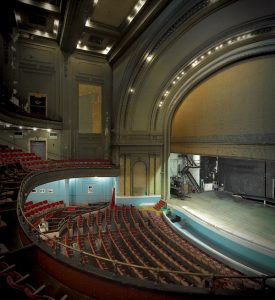 cannot withstand too much of a surge; there is neither technical equipment to speak of nor second-floor access as required by the Americans with Disabilities Act. Most problematic, there’s no water, and therefore, no working bathrooms. So if you need to plug in electronic gizmos requiring lots of juice, or if you’re wheelchair-bound and you have to pee during one of the one-off shows popping up at the Emery, good luck.

None of that—or the estimated $9 million-plus in needed fixes—stopped 30-something New York transplants Tina Manchise and Tara Gordon from cofounding in 2008 The Requiem Project, a nonprofit designed to return the Emery to its former glory. “When you have a problem you’ve looked at so hard, you have to flip the lens and see it as an asset,” says Manchise of what mere mortals would consider fairly massive setbacks.

Indeed, there’s a lot to cherish within the Emery. It is among just three acoustically pure rooms in the country—along with Carnegie Hall in New York and Symphony Hall in Boston. The building was also home to the Ohio Mechanics Institute, where Thomas Edison hung out and the inventor of Benadryl studied. That storied history makes the Emery’s present state seem much more romantic. But the nearly cosmic backstory of the resuscitation of the theater cannot be told without first telling the soulful tale of its co-saviors.

Manchise, a Cincinnati native and graduate of the College-Conservatory of Music, and Gordon, Boston-born and the more laid-back of the two, met as dancers in New York. Dance, they say, informs their every move in the refurbishment of the Emery. Like dance, the road toward The Requiem Project has been a series of interconnected—even mathematical—steps. And like modern dance, it’s a miracle any of it makes sense at all. In part, that’s because this dance began with death.

Manchise’s mother died in 2008 when complications from a bowel obstruction compromised her digestive tract. Tina was still living in New York at the time. “I got a phone call and thought she died in a car accident,” she says. Manchise returned to Cincinnati immediately, putting her life in New York on hold. “She died from what was preventable from an X-ray. I was really lost.”

A subsequent lawsuit dragged on for years and threatened to zap Manchise’s dream of starting an education-based business in New York with Gordon, who visited Cincinnati several times to help her friend with everything she was going through. Two months before filing the suit in her mother’s case, the attorney recused himself, leaving Manchise to find another one. When she met with the new lawyer, he first asked why the case was important. “This is a woman’s issue,” Manchise remembers telling him.

Fittingly, Manchise, Gordon, and I are meeting in The Women’s Parlor above the theater. The room is gorgeous in a ghostly Southern Gothic–True Blood kind of way. The walls are peeling, the large windows flood the room with light, and the original ornate light fixtures work.

After poring over her mother’s medical records and autopsy reports, Manchise realized the arts would be her healing salve. By late 2008, the two friends nixed their New York business idea and were open to possibilities here. “It kind of felt like we were supposed to find something,” she says in the metaphysical way she has of talking about her life’s path.

While touring an apartment in November 2008, they saw the Emery through a carriageway. “At the same time, we said, ‘What’s that?’ ” Manchise recalls. The rental agent told them it was the Emery Theatre, it was closed, and “nobody knows what to do with it.”

“We knew that’s what we were supposed to do,” Manchise says. “We came into the Emery Theatre on November 11”—her mother’s birthday.

Of course, not everything has been beautiful. The workload has been immense and they’ve had to endure a lot of men talking down to them about plumbing and architecture. Last year, when the project became too difficult to oversee from New York, the duo decided to move to Cincinnati permanently.

But first, they each got master’s degrees from New York University, which put them in close proximity to heavy hitters. They enlisted Ann Galligan, a mentor and renowned social policy scholar, and Andrew Hamingson, the former New York Public Theater executive director, as part of Requiem’s 18-member advisory board.

In the meantime, a pair of architecture firms with experience revitalizing closed theaters—John Senhauser Architects and Westlake Reed Leskosky—have signed on to do the work. The exterior lobby needs a makeover, the stairwell leading to the second floor will be upgraded, and banks of elevators will be added, along with performance, retail, and rehearsal spaces. It’s an ambitious overhaul, but Manchise and Gordon know what is at stake.

“We owe it to our careers we gave up, to our families who’ve invested,” says Manchise. “I have my mother beside me, and I need to tell her I did all I could.”

Turns out this is a woman’s issue after all.

Trailblazer
The Emery Theatre was built in 1911. It has been the performance space for the Symphony and the rehearsal studio for the Ballet. Mary Emery bequeathed it to Cincinnati, making her one of the nation’s first notable female philanthropists.

Public Interest
Mary Emery stipulated the theater be operated only by a nonprofit. The Requiem Project leases it from the University of Cincinnati, which once operated the Ohio College of Applied Sciences (formerly the Ohio Mechanics Institute) in the building.

Dirty Work
To stay lean, Manchise and Gordon have donated back their own salaries. Gordon takes tickets and empties garbage; Manchise cleans out the alleyway; and their 16 core “co-members” (volunteers) do the rest.

Paying the Bills
The Requiem Project hasn’t yet mounted a capital campaign. For information on how to help out, visit emerytheatre.com.