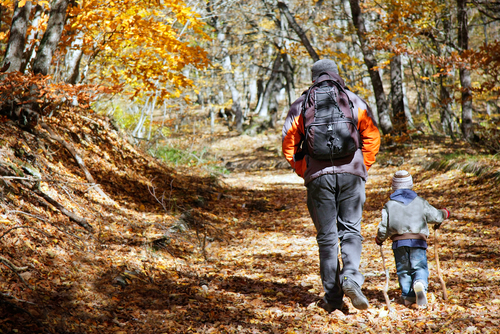 There are precious few remaining fall weekends to work with. So pick a spot and get hiking.

1. Caesar Creek State Park
Not to be confused with the sprawling outdoor flea market, this park lies about 45 miles up interstate 71 and features more than 3,700 acres of trails, camp sites, and nature preserves—including a 2,830-acre lake and beach. You likely won’t be swimming this time of year, but you will want to view the spectacular foliage on display and swing through the early 1800s-era Pioneer Village. 8570 E State Route 73, Waynesville, ohio.gov/tourism

2. Caldwell Nature Preserve
This little-known tract of forest sits right in the middle of the city, near the neighborhood of Carthage. What it lacks in size, it makes up for in trails, old growth trees, and a Nature Center. And according to Cincinnati Parks, Caldwell is home to a population of flying squirrels that swoop around the treetops at dusk. If this objectively awesome fact doesn’t get you there, then we don’t know what will. 400 West North Bend Rd., Carthage, cincinnatiparks.com/caldwell-preserve

3. East Fork State Park
At more than 4,800 acres, East Fork is one of the biggest state parks in Ohio, and it’s still only located about 25 miles southeast of the city. Hike miles of trails—including the 32-mile Steven Newman Worldwalker Perimeter Trail, which (as you might guess) encircles the entire park, and get a glimpse of President Ulysses S. Grant’s birthplace at Point Pleasant. 3294 Elklick Rd., Bethel, ohio.gov/tourism

4. Sharon Woods
Our favorite part of Sharon Woods park (besides the sweet paddleboats, obviously) is the gorge, with its 90-foot cliff and treasure trove of Ordovician fossils leftover from the prehistoric inland ocean that was here some 450 million years ago. 11450 Lebanon Rd., Sharonville, greatparks.org

5. Shawnee State Park
If a wow-factor view is what you’re after, then you’ll need to get a little closer to the Appalachians. Shawnee State Park is just a corner of the vast 63,000-acre Shawnee State Forest, but its proximity to the mountain foothills make it a worthy destination all its own. 4404 State Route 125, Portsmouth, ohio.gov/tourism

Top 5 Local Light Displays to Light Up Your Holiday Season