A little over two years ago, 47-year-old Cincinnati native Jenny Rush walked into Continuum Bazaar, one of her favorite Over-the-Rhine boutiques, wearing geometric porcelain pins she had handmade. The pins immediately caught the attention of Continuum’s owner, Ericka Leighton-Spradlin, who then decided the store should carry Rush’s designs. Last December marked the two-year anniversary of Rush’s first sale to the boutique. “I just started making [accessories] for myself and thought it would be fun to make them. I didn’t always intend it to be a business,” says Rush, the proud founder of Four Eyes Ceramics, an online retailer that primarily sells porcelain earrings with chic minimal designs.

In 1994, Rush graduated from the University of Cincinnati’s College of Design, Architecture, Art, and Planning with a fine arts degree. She says she almost switched her focus from painting to ceramics partway through, but talked herself out of it. Five years ago, Rush took her first ceramics class, finally learning how to throw clay, and began working with colored porcelain. Today, she sources inspiration from modern art and nature, incorporating soft earth tones and textured geometric shapes into each piece. Her designs are simple yet elegant. “I want to make conversation starters—pieces that make someone feel confident,” Rush says. “I mostly wear T-shirts and jeans. I’ve always leaned on accessories to complete my outfit and make it my own. That’s what I want my pieces to be for others: that perfect finishing touch.”

Rush’s following skyrocketed after Continuum started selling her accessories and promoting her work on Instagram. Prospective customers began requesting to follow Rush’s personal Instagram page. To keep her personal life separate, Rush created a page for her new business, which in two years has accumulated more than 8,000 followers. “It wasn’t my intent, but that’s where most of my business comes from. That’s where other shops have found me and it all just [grew] that way,” Rush says. “I don’t think I ever imagined that it would be what it is.”

Her biggest break came in the summer of 2017, less than a year after Rush launched Four Eyes Ceramics, when stylists at Marie Claire requested one of her accessories for actress Jenny Slate to wear in a photoshoot. Rush supplied a pair of oversized white geometric earrings, which was paired with a red-and-white striped REDValentino outfit. “When I first saw it, I was so excited I couldn’t breathe,” Rush says. “I had just made those earrings; I don’t even think I had sold them yet when the stylists contacted me.”

You can also find Four Eyes Ceramics products at Parlour in East Walnut Hills, the Cincinnati Art Museum’s gift shop, and various art shows across the U.S. In addition to Cincinnati’s Crafty Supermarket, Ohio Maker Mart, and City Flea, Rush has sold her work at craft fairs in Chicago and San Francisco. She has plans to attend the Renegade Craft Fair in Los Angeles this April. Despite the majority of her customers living on the West Coast, Rush has decided to stay close to family and friends and work from her Cincinnati home. “Cincinnati has a lot of amazing creative people here,” she says. “It’s got a great community, and I think there’s something to be said for staying and working in your hometown and shining a light on an area that people might not think about being a big creative scene.” 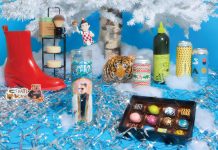