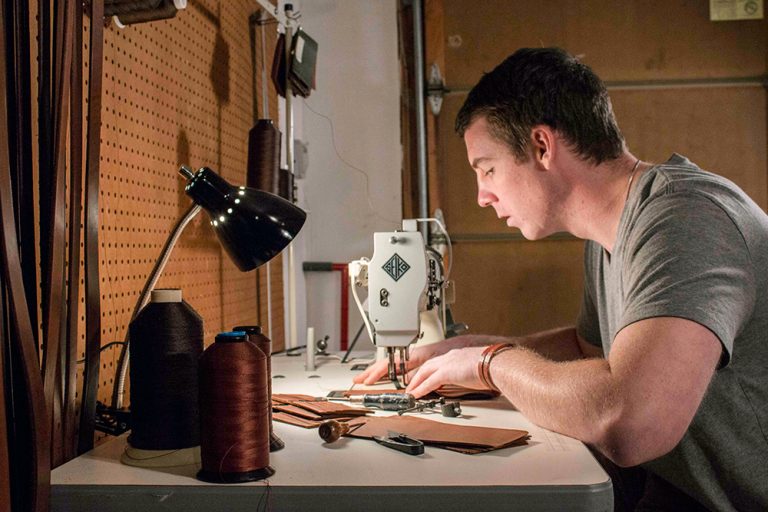 Thanks to companies like Apple and Google, garages have become storied business incubators. But Connor Sambrookes, founder of Brookes & Hyde, doesn’t want to be the next Steve Jobs. “I want to be the next big Louis Vuitton or Marc Jacobs,” says Sambrookes from, yes, his parents’ garage in Symmes Township. The 24-year-old DAAP grad started his handcrafted leather goods company while still a student, before officially launching in December 2015. “The entire brand was my senior thesis,” says Sambrookes, who studied industrial design. Wait…don’t industrial designers create stuff like laptops and pop cans? “I wanted to be a shoe designer and work with Nike and Adidas. But I landed an internship with Randa Accessories in Chicago and learned the entire process of leather accessory production. I immediately fell in love with it,” he says.

Sambrookes now produces his own line of leather accessories that includes key rings, coasters, men’s belts, and dog collars and will soon introduce credit card cases. The line is available at his website (brookesandhyde.com), Celebrate Local in Liberty Township, the monthly Art on Vine shows downtown, and soon at MiCA 12/v in OTR. Sambrookes is also working on expanding his offerings: “I want to get into bags and iPad cases,” he says.

Sambrookes gets his raw material from Horween Leathers, the 110-year old Chicago company known for its high quality leather (among Horween’s many venerable customers is Wilson, the maker of NFL footballs). “I got to tour Horween tannery, and seeing the history and their entire process of making the leather, that just fed right into my brand,” he says. He was so smitten that he returned to Randa for a second internship. “I knew I couldn’t go back to designing on a computer. Working with your hands is so much more satisfying.”